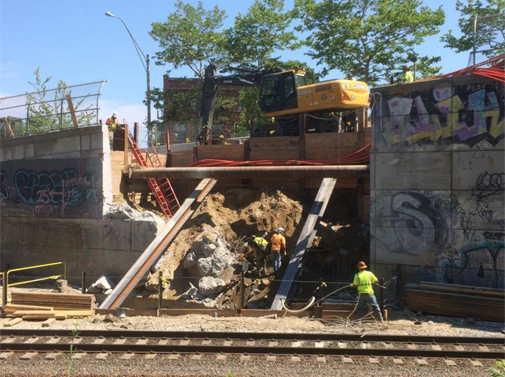 City Council, Board of Alderman approvals needed in respective cities
By Marc Levy

Green line extension workers relocate a utility line in July on the Medford Street Bridge in Somerville – just part of the millions of dollars invested already in the project. (Photo: Massachusetts Department of Transportation)

Cambridge is expected to contribute $25 million to construction of the green line light rail extension, including financial contributions from developers in the NorthPoint neighborhood, and Somerville is projected to put in $50 million to close a funding gap that has threatened to shut down the project entirely.

The contributions will be subject to City Council and Board of Alderman approvals in the respective cities, officials in Cambridge and Somerville said Thursday in a joint announcement.

“It is our understanding,” the statement said, “that without firm financial commitments from our municipalities that the GLX could be canceled and the commonwealth would forfeit not only its $996 million federal New Starts grant award, but an estimated $700 million in ‘sunk costs’ of the state’s $996 million share of the project. Additionally, the fulfillment of the public needs that this project was designed to meet would remain unrealized.”

The unprecedented city investments made sense as a way to improve regional air quality, reduce roadway congestion, encourage economic growth and provide public transportation for residents, workers and visitors, according to the statement from Cambridge City Manager Richard C. Rossi and Somerville Mayor Joseph A. Curtatone.

“Expanding this financial partnership is an extreme and unprecedented arrangement for a state infrastructure project. Despite the fact that our cities bear no responsibility for the cost overruns that brought the GLX to this moment of crisis, we will seek to support the commonwealth by expanding our cost-sharing role,” Rossi and Curtatone said. “The green line is that important to our communities, our region and our state.”

It’s expected that about 45,000 riders will use the service each day, meaning 25,000 fewer miles traveled in the region by car, Rossi said.

Response – at least from one project partner – has been positive.

“I want to congratulate the cities of Cambridge and Somerville for making this unprecedented municipal commitment to help fund a critical state transportation project,” said Marc Draisen, executive director of the Metropolitan Area Planning Council, which will be working with the state and cities on transit planning. “The green line extension will have a significant, positive impact on our region in terms of jobs created and retained, new housing units created and increased transit access for tens of thousands of residents.”

The light rail extension took shape in 2009 as a $600 million to $1 billion project with seven stops in Somerville and Medford stretching to Route 16. The rethinking began quickly, though, with that final stop moved to a second phase for lack of funding by the summer of 2010 – a time most stops were still expected to be installed by the end of 2014.

This year, it was revealed costs had ballooned to up to $1 billion more than anticipated, with the federal government to provide $996 million of the $3 billion price tag. All of the contractors and consultants were fired, and state transportation officials said the project might be scuttled entirely if costs couldn’t be lowered, despite the state being legally obligated to finish the project as part of a clean-air settlement related to the Big Dig.

The green line spur to Somerville’s Union Square from Lechmere – which affects Cambridge’s nearby Inman Square as well – were both at risk in the budget crisis,  and a series of public meetings held locally by the state Department of Transportation and MBTA to reevaluate the project was well-attended.

On Thursday, city councillor and state Rep. Tim Toomey and four other legislators from Somerville and Medford – fellow representatives Christine Barber, Sean Garballey and and Denise Provost and state Sen. Pat Jehlen – sent a letter to the Gov. Charlie Baker administration protesting the “last-minute” cancellation of a final meeting that had been scheduled for tonight.

“By minimizing input from community stakeholders at this critical phase in planning, the administration is disregarding the voices of those who will live with the decisions made around the GLX project for generations to come,” the letter said.

Rossi and Curtatone’s statement also noted the “significant funds and resources” already invested in support of the GLX project by the cities, including Somerville’s investment of more than $8 million for land acquisition and other infrastructure and the “tens of millions of dollars” committed to by developers in NorthPoint, which will inherit the Lechmere T station as it moves across Monsignor O’Brien Highway.

With their investment, the cities expect the project to “retain core program elements … seven light rail transit stations including a spur to Union Square, a vehicle maintenance facility, a community path and related utility upgrades.”

The Cambridge and Somerville investments came “with the expectation that this is truly a new precedent for statewide policy, and that our communities will not be held to higher standards than other Massachusetts municipalities seeking state and federal financing for roadway, transit or other infrastructure projects,” the city officials said.