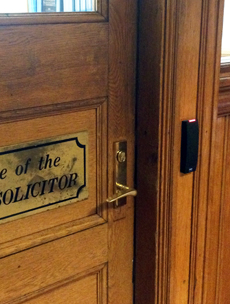 Card readers have been installed at offices in City Hall as security measures grow in municipal buildings. (Photo: Marc Levy)

Fears of an attack on public schools and scary encounters with potentially violent people in city buildings have given rise to a municipal “building security enhancement project” with a starting price tag of $2.1 million.

While the public won’t see any difference in schools or municipal buildings such as City Hall – “I don’t think we’re at the point yet where we’re talking about barriers and metal detectors,” City Manager Richard C. Rossi told the City Council on June 27 – the city is moving toward a single system that would allow for better control of a building in a crisis, such as a way to lock every door at the high school in the case of a school shooting but allow access to emergency responders such as police.

Already there are card readers beside many office doors in City Hall that can be used to allow safer access for employees who want to work at odd hours, but some older systems at public buildings, including at fire stations, are failing, said Owen O’Riordan, commissioner of the city’s Department of Public Works. The transfer of money from the city’s “free cash” reserves allows those systems to be switched to the same platform that will be put in place at existing buildings and added to buildings as they are built or rebuilt. The current request would cover 19 buildings, and expected requests would cover another 13.

While some of the need is obvious because of changing times – there were four gun and bomb threats delivered to Cambridge Public Schools just from mid-November to early December – Rossi and O’Riordan are also responding to the complaints of city workers.

“There are many employees who are very concerned about their safety. What people have been encountering day to day in these buildings is not what I would say is normal,” Rossi said, explaining later that he was referring to people who came in to address issues that upset them, including “some really tough people [who] come in and make threatening statements.”

Some employees have also been startled by homeless people using restrooms in the early morning, O’Riordan said.

Two years ago, Mayor E. Denise Simmons – then a city councillor – asked that Rossi study putting a police officer on permanent duty in City Hall as a result of concerns for safety among her and other staff and officials, since “unlike many other city halls and public buildings throughout the commonwealth, Cambridge has eschewed metal detectors and other, similar security measures in favor of having a more welcoming, open-door policy.”

Such security measures have reliably faced skepticism from councillors Craig Kelley and Nadeem Mazen, though with this expenditure – and the promise that O’Riordan and Rossi’s replacement as city manager would be coming back in the late fall for more money for school security – Mazen’s questions about the expenditure had more to do with fears of poor implementation than over-militarization.

“Technology can be a really hard problem for one person or one consultant to attack,”he said, noting the relentlessly troubled rollout and tweaking of audio-visual equipment for the council that was meant to be an improvement over an older system but now seemed like sending “good money after bad.”

“I hope we’ve learned something from this,” Mazen said. “We have to deal with this every week.”

Rather than rely on a single vendor for life-or-death security measures, as the city has when it comes to the audio experts whose work continues to frustrate councillors and attendees at civic meetings, the money being requested would include money to hire a security coordinator, who would work with an existing working group of staff from the city and the school and public safety departments. “This isn’t one person telling us we have to buy this and we have to do that. There would be much greater review,” Rossi said.