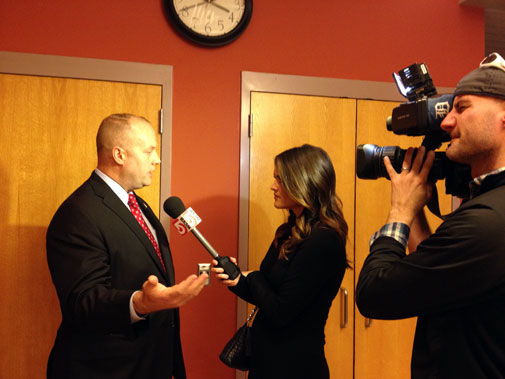 More than 200 people packed a Sunday community meeting about recent security threats to Cambridge schools, as city, school and federal officials tried to calm anxieties with an update that they have growing confidence the bomb and gun threats are a hoax. “Based on what we know now,” FBI Special Agent Kieran Ramsey said, “we are assessing these threats to be non-credible.”

Commissioner Robert C. Haas reported “a backing away [and] a change in the tenor of the threats” and said officials’ job now was to “ease back into normalcy.”

After a Tuesday bomb threat against city upper schools and Thursday and Friday threats of gun violence, Haas and Ramsey said they were seeing a scramble to reassure authorities the “threat is over” that, coupled with signs of immaturity in the messages – including an initial complaint there is “too much homework” in the middle schools – led authorities to feel danger is not imminent.

Though police officer presence at schools will continue, at least through Monday, Haas indicated the urgency is diminishing. “We increasingly believe that this is the end of hearing from this person,” he said. The job now, he said, is to find the perpetrator and relay a sense of security to families.

“We would love to bring federal or state charges if warranted,” Ramsey said. 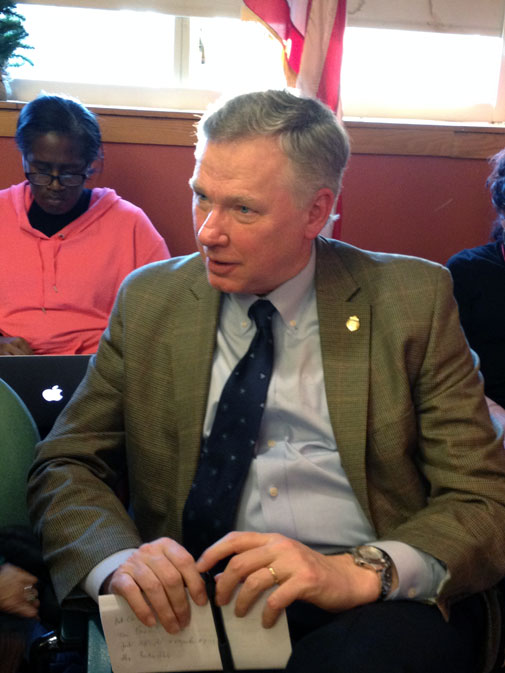 City Manager Richard C. Rossi, schools Superintendent Jeff Young, Haas and Ramsey took turns at the microphone explaining the context of the threats, the responses and their approaches to investigations and communications, then opened the meeting to questions.

Taking pains to stress that he responds to all threats seriously and “at a higher level than I feel the threat is – never below,” Haas sketched a timeline of the threats and the reasons for a growing belief the threats may have come from a student “who didn’t want to do his homework:”

Tuesday’s threat was “general and vague” and transmitted, as Haas said, from a “good Samaritan” – here Haas made air quotes – claiming to have spotted a post on a “public bulletin board” threatening a bomb situation at the city’s middle schools. Claiming to be forwarding the post out of concern, the Samaritan sent an email to a Cambridge police online tipline where people may post anonymously. Haas called the emails “amateurish” and said the emailer has since been “expressing anxiety” and saying the alleged original poster “has left the country.”

Police and FBI increasingly believe the original emailer and Samaritan may be the same person.

Despite now feeling the threats are not likely to be credible, Haas and Ramsey were joined by Rossi and Young in saying they take the safety and comfort of the children and their families very seriously.

“You are being served by an incredibly well-staffed, well-resourced, well-trained set of public officials,” Rossi assured the diverse crowd of people overflowing into the hallway at the Cambridge Senior Center. “There are no limits to what we will do to make this a safe, viable community for you and your children.”

The investigation will continue, Haas and Ramsey said. “I think they hope we will stop,” Haas said of the person or people behind the threats. “We won’t stop.”

While Haas said that there will be police presence at the schools Monday, he declined to give a more detailed plan. “I am not laying out for whoever is doing this our strategy,” he said. “We are assessing it every day.” He explained that he was telling families about police for Monday because he did not want folks to assume their presence meant a viable threat was continuing. “I want to reassure you. This doesn’t mean it ends tomorrow.”

FBI agent Ramsey joined Larry Berkowitz, director of the Riverside Trauma Center, is saying that in their experience working with other communities during crisis, Cambridge stands out. “I know of no communities that address situations better than Cambridge does,” Berkowitz said.

Ramsey praised Cambridge’s readiness in terms of planning, preparation and training and stressed the quick and collaborative response. “It brings me comfort to see how this community reacts to this,” he said, joined by Haas, Rossi, Kiernan and Young in saying communication between agencies was immediate and continuous.

Haas said he made a “very deliberate decision” about which officers to assign to the schools. “It would have been easy to throw everything we had at this,” Haas said, but only officers from the Youth and Family Services unit were posted at schools. These officers, who are familiar with the schools and many of the students, endured 12-hour shifts to avoid the need to bring in unfamiliar officers.

Haas added, though, that “we have been learning” how to handle this. “If you noticed,” he said, “we changed how we did things.” There had been an outcry from families who did not know about the first threats until well into the school day, “but we got pushback on that,” Haas said. “We changed. That process is not over. We are still learning. We need to get to a place where we are acting as a community.”

The district drew parent criticism last year for being slow to respond after an elementary school teacher was arrested on child pornography charges. While Somerville held a meeting about its former employee the next day, Cambridge scheduled a meeting for six days later – then moved it forward to the second day after complaints.

Haas also said that in the past the police department probably could have handled tracing the threats using internal staff. The changes in Internet technology meant that in this instance they called in the FBI early in the process. “If this had happened two years ago,” he said, “we would already have had a protocol in place. What makes this different is what happened nationally, and the dark websites that exist in the Internet across this world.”

The FBI’s Ramsey agreed, saying, “We are facing the increasing use of encryption technology and anonymizing software. It makes it very, very challenging and sometimes impossible to trace” the origin of internet messages.

In questions from the audience, some parents expressed skepticism that sending messages anonymously was something a middle or high schooler could do. But the “anonymizing software” likely to have been used is just one of several free programs that can hide senders’ identities, Ramsey said. A simple Google search generates several options, and two Cambridge middle school students readily told Cambridge Day that they could find out how to do it in a matter of minutes – and one knew already.

The stress of these events has taken its toll, Young said. “Attendance is down. Education has been somewhat disrupted,” he said, noting that some parents who sent their kids to school during the threats started to feel “less secure” and removed them later in the day.

“At the same time,” he said, teachers and principals – who got a round of applause when Young asked the several present at the meeting to show their hands – “continue on. The tiny interactions – the human touch, a caring look, a checking in – that might seem insignificant in a normal school day turn out to make all the difference in a non-normal school day.”

“While things are not normal, I do know that people are working really hard … The anxiety and fear on one hand is counterbalanced from the tremendous support from the school, city and police staff,” Young said, giving special thanks to the police officers who “do not just stand at the door [but] are interacting with people, actively involved in helping everyone know that they are keeping people safe.”

Like Rossi and Cambridge Peace Commission Executive Director Brian Corr, who emceed the meeting, Young added that there are some families whose past experiences mean that “the threat of this past week hit a particular chord” and called for the community to “stand together.”

Asked by an audience member – in a question that drew applause – Young confirmed that there will be a reassessment of security protocols at the schools. “There is an interesting tension between keeping schools tightly monitored and locked and ‘cameraed’ and secured and all that on one hand and having the kind of open environment that schools in Cambridge and others have enjoyed. We want the right balance between safe and secure and being nurturing and warm on other hand.”

Haas agreed there was a balance to struck in making schools safe, and that “I do not want my kids in this community to be scared to go to school.”

Another question that garnered applause was whether there would be a uniform message in the schools to all children about the situation. Young agreed a next step will be “convening to get a common message.”

Reporters and cameras from Fox News, Channel 5 and NECN were present. One audience member said that she did not want to be filmed and expressed displeasure that the media were allowed in. Corr explained that while the media were not invited, it was a public meeting and they could not be barred – but questions were to come from the “community” rather than the media.

The meeting ended with words from Berkowitz, who joined the officials and members from the Riverside Trauma center, Guidance Center and police social services department in being available after the meeting for consultation.