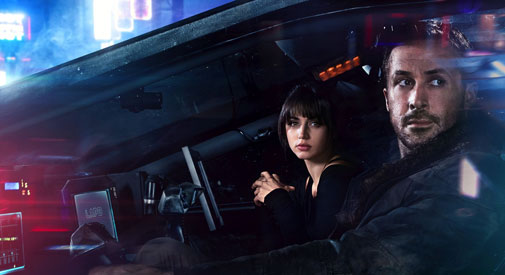 Much is borrowed and polished in Denis Villeneuve’s highly anticipated “Blade Runner 2049,” the sequel to Ridley Scott’s 1982 cult classic – right down to its bones, literally, and the screen-writing tandem of Michael Green (“Logan”) and Hampton Fancher (whose writing CV is pretty much the ’82 “Blade Runner”). They do a respectable job of dovetailing events some 30 years out into the future (the original took place in 2019), even if it strains reason at turns. It’s both homage and departure: That “scan left, zoom in” image-enhancement scenario, a punked-out pleasure model (Daryl Hannah in ’82, Mackenzie Davis here) and a haunting techno score that resonates in your chest (Hans Zimmer and Benjamin Wallfisch, echoing Vangelis’ earlier work near seamlessly), are all in there, teasingly so. 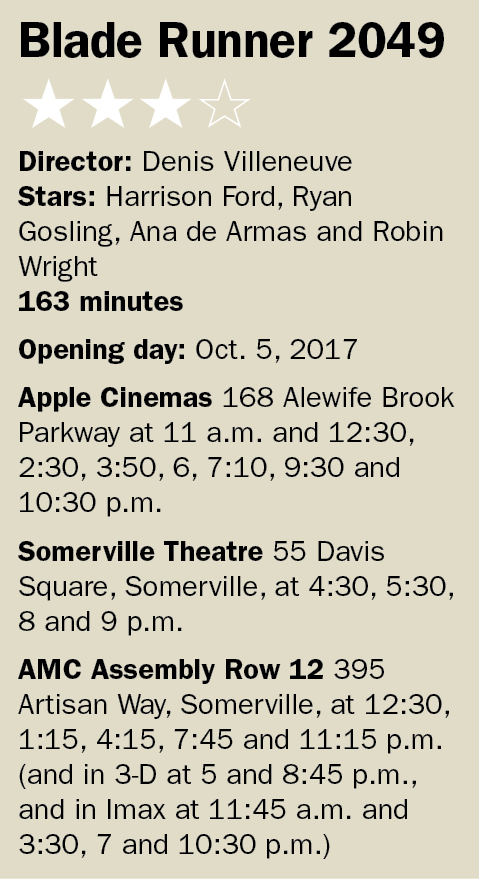 At two hours and forty-eight minutes, Villeneuve paces the film effectively, smartly holding back and ever ratcheting it up – a feat the director didn’t quite master in his last sci-fi outing, “Arrival” (2016). As you should expect, the action takes place in 2049. Los Angeles is a lot more crowded and still a dark, rain-slicked Gotham with shocks of neon blooming above a drab cityscape. Opening info tells us the Earth’s been beset by overcrowding and famine, there’s nothing green anywhere anymore, so up have cropped protein farms where mealworm larvae are harvested to feed the masses “Soylent Green”-esque pap in ramen bowls. Not to mention there’s the great “Blackout of 2022” in which scads of data files and historical records are lost. Gone the way of Lehman Brothers is the old Tyrell Corp., manufacturer of “replicants” (biorobotic androids for those few unfamiliar with the earlier film, or the Phillip K. Dick novel it was based on); it’s been supplanted by Wallace Industries, which makes the new-line “skin jobs” more obedient, yet still physiologically superior to humans and imbedded with memories, even though they are self-aware they are implants – which seems somewhat illogical and superfluous, given the implant process is an arduous one.

The unenviable job of blade runner (cops who hunt rogue replicants) hasn’t changed much over three decades, or so we learn as we catch up with K (Ryan Gosling), heading out to a protein farm to look for an old Nexus-class model – one akin to Rutger Hauer’s rebellious blond badass in the ’82 version – and stumbles upon mysterious remains, an unearthing that threatens the dystopian world order. On one side you have LAPD honcho Joshi (a steely Robin Wright, who steals every scene she’s in) who wants K to burn it down and cover it up; on the other, you have an underground network of replicants waiting for their messiah to lead them to freedom. In the middle looms Niander Wallace (Jared Leto), the gonzo godly creator of replicants, and his sidekick, Luv (Sylvia Hoeks) a comely replicant with sartorial style who can orchestrate a drone strike while getting her nails done and even more skilled at matters of bloodshed with her bare hands. Many other subplots drive the film – too many, perhaps – with most roads leading to Rick Deckard (Harrison Ford), the protagonist of Scott’s film, and, as with “Children of Men” (2006) and Darren Aronofsky’s “Mother!,” a profound birth becomes a game changer.

Visually, the pallet that Villeneuve, production designer Dennis Gassner and cinematographer Roger Deakins (a man due and deserving of an Oscar) create splashes across the screen, a never-ending sea of wonderment. If it weren’t for Scott’s timeless vision preceding it, “Blade Runner 2049” might register as the most mind-blowing cinematic feast since Kubrick’s “2001: A Space Odyssey.”

“Blade Runner 2049” loses its footing in the same familiar miscue Villeneuve has made in other films (“Prisoners” and “Arrival”): The assured narrative cleverness and depth of character never quite rise to the level of the scrumptious visual renderings and foreboding atmosphere. Substance over style is a much more forgiving imbalance.

Early on, there’s a deep philosophical exchange about what constitutes a “soul.” Much is made of it – who has one, personal identity and so on. Had that ideology been taken to heart by the filmmakers, “Blade Runner 2049” might have registered more of a lasting bite. As is, Gosling, so good at quirky nonchalance with a tint of sociopathic malevolence in films such as “Drive” (2011) and “Only God Forgives” (2013), seems unnaturally restrained here. Even as things come out of the woodwork or knock K’s cruiser from the sky, the actor maintains a stoic, straight-ahead countenance, as if he were passively enjoying the tedium of a golf match. To show us K cares about something (or someone), he’s given an A.I./virtual reality girlfriend named Joi (Ana de Armas) who’s more an abstract entity with a soul, not so different from Scarlett Johansson in “Her” (2013). It’s all good and neat in construct, except Joi is the possessor of the deeper internal plumbing.  Luv and Wallace don’t offer much personality zing either. They’re stock garnish, caricatures with skin. Where Hauer and his replicant crew were created with complexity, conflict and regret, the rebel plight of those shackled by bioengineered chains here feels hollow and tacked on.

“It’s too bad she won’t live” – as James Edward Olmos’ cop says at the end of the original – but it seems that Scott’s punk-noir darling has.