‘Only God Forgives’: ‘Drive’ team gets bloody red in the grayest of gray areas 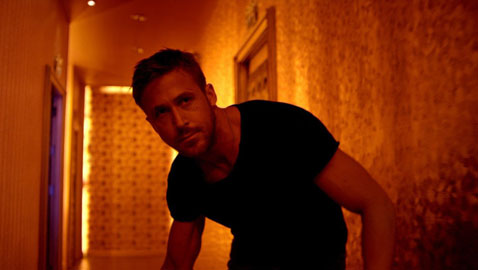 ‘Only God Forgives’: ‘Drive’ team gets bloody red in the grayest of gray areas

With “Only God Forgives” Nicolas Winding Refn and Ryan Gosling team up for their second bloody go-round after finding success and acclaim for their 2011 car chase noir “Drive.” The teaming of the pair is a good one – a director with a hyper-stylized eye and a penchant for flourishes of quick bloody violence that would make Sam Peckinpah nod in appreciation; and a laconic actor, enigmatic and bristling, a brooding baby-faced brute, if you will, capable of unspeakable savagery. 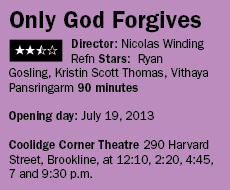 In “Drive,” the story was rooted with a true antihero who comes to the aid of the hapless family next door, a simple setup that played out in the darkest recesses of the black and white spectrum. Here, though, there’s not a true right and just corner. Those who seemingly mete out justice by disemboweling others later prove to be morally ambiguous and perhaps even the face of evil.

Mind you, there’s nothing wrong with moral ambiguity and gray areas. They can texture a film with provocation and soul-searching exploration. But when the motivational catalysts and overall driving tenets become hollow and arbitrary, the connection the filmmaker wants to forge with the audience gets lost in a sea of senseless violence.

That’s pretty much what happens here. Gosling’s Julian and his brother Billy (Tom Burke) are expats running a boxing gym in Bangkok, which is really a front for a drug trafficking ring run by their brassy mother (Kristin Scott Thomas). Right out of the gate Billy mentions he’s “got a date with the devil” and runs off and rapes and brutally murders an underage sex worker. The local police chief, Chang (Vithaya Pansringarm) allows the father of the girl to bludgeon Billy to death in retaliation, then cuts off the father’s arm for allowing his daughter to work in the sex trade.

So goes the film as Julian is ultimately enlisted by his mother to exact revenge and “Only God Forgives” settles into a blood feud between the transplanted Americans and Chang. Julian too becomes conflicted when he learns of his brother’s atrocity, and there are strange and titillating overtones of sexual tension with mom. Scott Thomas nearly steals every scene she’s in. Some are fine moments of weary female assertion, others ride dangerously close to “Mommy Dearest” camp and then there are those moments that come out of left field, such as when she meets Julian’s girlfriend (a dancer in a strip club) and refers to her as a “cum dumpster.” It doesn’t matter the context – whenever Scott Thomas is onscreen, the film is alive.

Gosling as Julian here feels like a blanched-out version of his cool driver from “Drive” and Pansringarm’s stoic Chang practically floats through the movie an arcane ghost. Sized up against the bigger, younger and more physically imposing Billy or Julian, Chang remains calm, poised and in command. His sangfroid is an eerie prelude to death and his lethal capabilities include wielding a samurai saber covertly holstered along the spine of his back. When it comes out, someone bleeds in ample spurts.

Refn, who is Danish and made the devilishly taut prison film “Bronson” (bringing him and Tom Hardy to the attention of the world audience in 2008) has made films in L.A., the U.K. and Asia and with timeframes that have spanned as far back as the Vikings (”Valhalla Rising”). At the heart of all of Refn’s work is the embattled male, outside the bounds of the law and up against a wall. His style too, long telescopic shots of red-bathed hallways and dark rooms with jagged slashes of light to expose the emotion on the protagonist’s face, as well as his seamless integration of soundtrack, action and mood, has become signature. But the one thing Refn should keep in mind: No matter how broadly he trots the globe or how richly choreographed his arterial spray is in some underworld abyss, a story and its characters must have heart and soul.