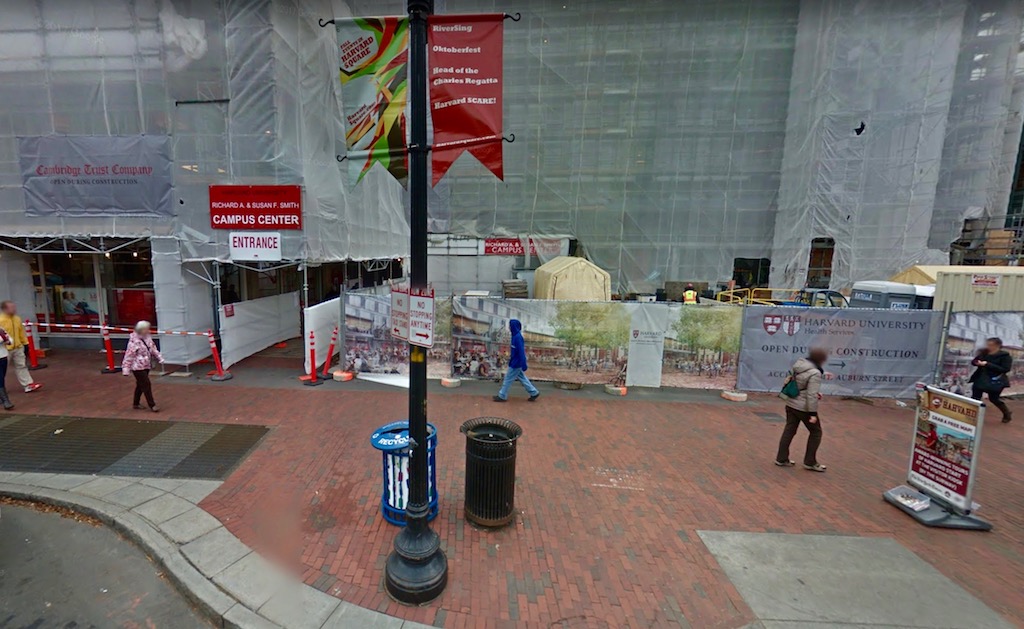 Construction at Harvard’s Smith Center began in early 2016 and is set to continue until summer. (Photo: Google)

Harvard wants to get serious about construction at its Smith Campus Center, which is more than a year in on its way to becoming a “welcome plaza,” student center and other uses, but has at least another half-year to go. Local businesses worry they’ll be further hurt by the plan.

“After all of the street fatigue developed over [a year of construction], extending it from 6 p.m. to 12 a.m. until completion … would be a hardship for the businesses, and I think it’s a little too much,” said Patrick Lee, of the Grafton Group of restaurants, at the License Commission’s Wednesday meeting. The Grafton Group’s Hourly Oyster House opened around the corner on Dunster Street in September 2016.

“We support the project – we want to get it done as quickly as possible as well. But there really hasn’t been any significant talks with the businesses,” Lee said. “Everyone needs to get together and talk about this before we basically double the impact of the project.”

Moving construction earlier in the day, rather than later, might work, he said. While the noise would keep affecting lunch business, it wouldn’t grow to hurt dinner as well.

A letter from the Harvard Square Business Association joined in asking for the noise variance to be delayed long enough to allow Consigli to talk with local business owners, who will soon also face a block’s worth of construction centered around the Abbot building – another site at the heart of the square, now the home of the Curious George toy store – and then work on the Harvard Square plaza and a block over on Church Street, where the former Harvard Square Theatre will be turned into a mixed-use, 60,000-square-foot building with lower-level movie screens; street retail; and five stories of office space.

Even since a wave of shutdowns and relocations made way for construction, restaurants and retailers have reported a drop in business. A tapas restaurant called En Boca lasted only eight months on Dunster Street, closing in June with a message that it was “plagued by the ongoing construction” that made closing seem “the only viable option.” The Harvard Crimson has reported that the restaurateurs behind En Boca are suing Harvard.

Consideration of the 6 p.m. to midnight noise variance was tabled until the License Commission hearing scheduled for Nov. 29.