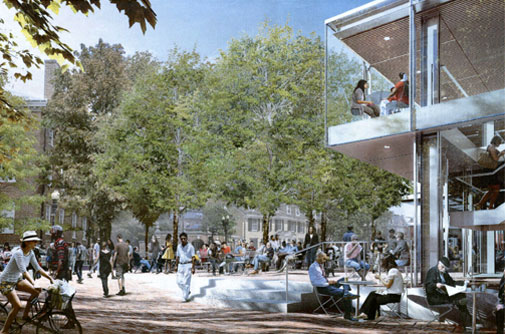 A revised plan for Forbes Plaza in Harvard Square calls for a second-story projection over public seating. (Renderings: Harvard University)

An open house Monday showing off Harvard’s latest proposal for a prominent part of Harvard Square wins praise from a staunch opponent of the university’s original plans.

Until last week, it was thought Harvard was pushing to add a two-story glass “pavilion” that would eliminate much of the open-air dining at the Au Bon Pain across the street from the T station entrance on Massachusetts Ave., claiming about a quarter of the public plaza. It drew concerns that Harvard would shut off access to the public, while the current set of open-air tables and chairs is available 24 hours. 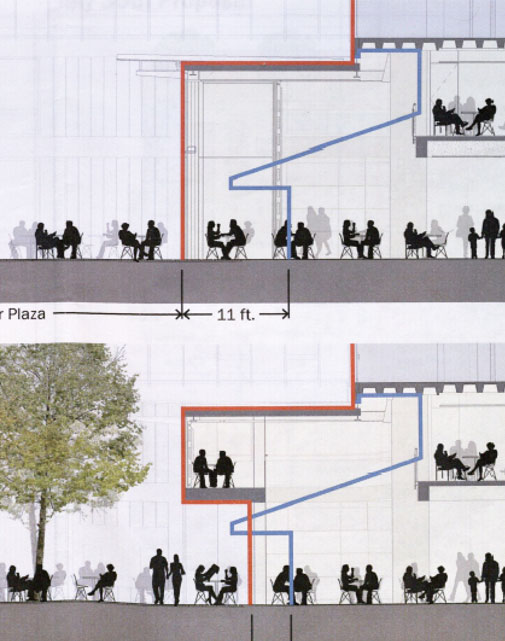 But Harvard has modified plans to show off at a Monday open house, now showing a proposed first-floor glass wall extending four feet farther than the existing Au Bon Pain restaurant, rather than 11 feet.

The university would add a glass box at the second-story level, though, creating a semi-public balcony with views of the square. The plaza will become all sidewalk-level along Massachusetts Avenue, eliminating a raised, walled-in portion, and of the projected 24 percent increase in total seating – indoors and out – 44 outdoor seats would be sheltered by the overhang.

“Harvard recognizes that the Richard A. and Susan F. Smith Campus Center is a very important site in Harvard Square to the Cambridge community,” the university design team said in a document provided to residents that refers to the name of the structure coming to dominate the plaza. “A key goal of Harvard’s proposed transformation of this site has been to ensure that the building becomes even more welcoming and offers enhanced public access and amenities that can be enjoyed by the Cambridge community, visitors and Harvard.”

Other features proposed by the university include unrestricted public restrooms located more conveniently, replacing the Au Bon Pain’s patron-only restrooms deep within the restaurant, and adding restroom fixtures, to a dozen from nine; adding an electronic display showing arrival times for the square’s bus and subway services; adding game tables embedding chessboards that meet international standards, with more comfortable seating and improved lighting; and creating an “intimate grove” by taking out four trees and putting back five.

The Harvard team had meetings with residents, and specifically chess players, in revising its plans, activist and City Council candidate James Williamson said.

“I think we were all quite surprised and pleased in general with the direction Harvard’s proposals have taken,” Williamson said. “There are a few details I think still worth exploring with Harvard and their team, but all in all I am certainly tempted to suggest we celebrate a largely very successful collective effort and actually thank Harvard – and especially Tanya Iatridis – for their, to me, surprising willingness to listen to the community in this case and actually hear so much of what we’ve been talking about.”

Iatridis is Harvard’s senior director of university planning; the project’s design architect is Hopkins Architects Partnership, and the executive architect is Bruner/Cott & Associates. Their revised designs, dated Oct. 1, are labeled as “modified … to address the community concerns.”

Williamson said in an email that putting the plaza at sidewalk level and making a “prong” of five chess tables projecting through the area’s dining tables were concerns best addressed with the architects at Harvard’s open house, scheduled for 5:30 p.m. Monday on the second floor above Cambridge Trust, 1336 Massachusetts Ave., on the plaza.

“We should also recognize the very important, public-interest-minded vigilance of the BZA, too, without which we wouldn’t have been here,” Williamson said, referring to the city’s Board of Zoning Appeal.

The entire 7 p.m. Thursday hearing of the board is to be used to discuss the plaza redesign.

In addition to the street-level changes, there were plans to install a “highly transparent projecting bay” at the plaza’s 10th-floor roofline so people using Harvard meeting and event spaces could look out over the plaza, Massachusetts Avenue and Harvard Yard. The university called it “a civic gesture to Harvard Square, creating a new beacon” at the roofline – but a revised design is set back above the building, creating a patio space rather than a projection. The new design doesn’t need a variance from the board, according to Harvard.