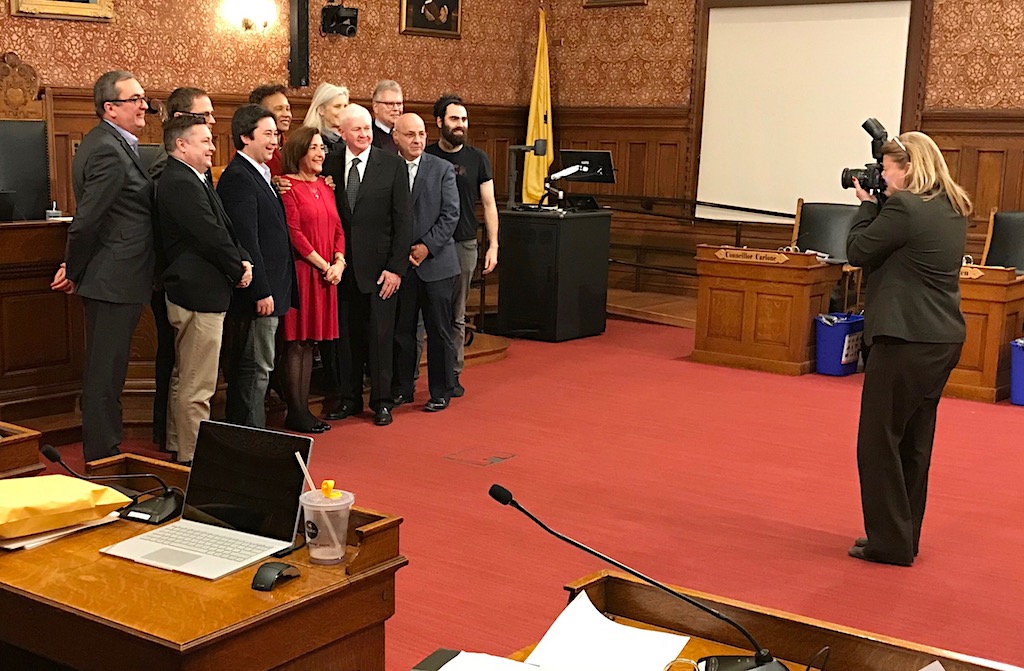 The business of the final City Council meeting of the year and of the current two-year term paused Monday for a farewell ceremony for Sandra Albano, executive assistant to the council, as well as for three councillors who decided not to run for reelection.

“We won’t say goodbye, just say so long, because we look forward to seeing you again,” said outgoing Mayor E. Denise Simmons to councillors Nadeem Mazen (“We thank you for your exuberance and gift of vigorous debate”); Leland Cheung (“his entrepreneurial style and keenness for innovation always sends us to look beyond the stars”); and David Maher (“my very good friend … we had the opportunity to serve for a very long time together”).

Cheung decided not to run after four terms. Since being elected to the council in 2009 he made unsuccessful bids to be elected mayor by his fellow councillors, to be lieutenant governor in 2014 and to unseat state Sen. Pat Jehlen in the Second Middlesex District in 2016. In an interview about the Senate run that spring, Cheung said he might return to the world of venture capital in California after politics; more recently, he said he and his family had decided to stay in Cambridge.

Maher will move to serving full time as president of the Cambridge Chamber of Commerce after eight terms in the council. He was elected to the council in 1999 after four terms serving on the School Committee. He was mayor twice and vice mayor in his council term. Over the past year, he’d been councillor and chamber president concurrently.

Mazen vowed to stay in office no longer than three terms and opted out last year at two with an eye on a seat in the U.S. House of Representatives. On Monday he indicated family health issues would delay a run for higher office.

Each got eloquent send-offs from counterparts on the council, starting with an emotional Dennis Carlone saying goodbye to Mazen, a longtime ally he considered “a brother”; Simmons spoke about Cheung; and Tim Toomey, the longest-serving councillor, spoke about Maher.

City Manager Louis A. DePasquale noted the contributions of all three, including Cheung’s introduction of a Participatory Budget process and minibonds, a small investment opportunity for residents that won the city recognition from The Bond Buyer magazine as its “Non-Traditional Deal of the Year.” “Leland convinced us it was the way to go,” DePasquale said.

Maher was similarly honored by the city manager for “bringing people together” over many issues, including the school Innovation Agenda that changed the district model to introduce middle schools, as well as in leading the charge to get $500 million worth of school renovations in place. “The most amazing thing about that is that councillor Maher convinced manager Healy that this was a good idea,” DePasquale said, drawing laughs as people remembered the spending-wary approach of former city manager Robert W. Healy. “I don’t know if anyone else could have.”

Mazen would have lasting impact in the areas of bicycling, development of East Cambridge’s Foundry building and for “a commitment and passion to ensure the most vulnerable among us is served, are involved in the community process and have a voice in government … you have helped the city how it does outreach, how it thinks about public process and how we communicate with our residents.” 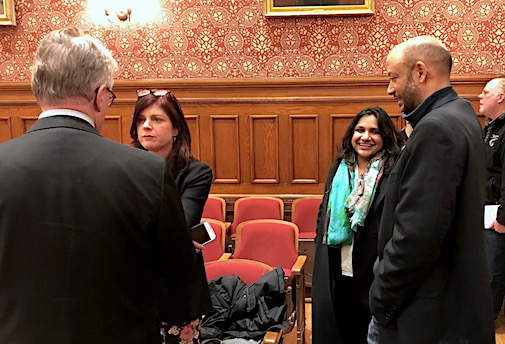 Albano is retiring after more than 47 years with the city, after starting in 1970 as a high school student working part-time at Cambridge Hospital. “It is amazing to think that Sandra has the history to have worked with every city councillor and mayor … to the present day, which translates as having nine bosses every two years over that space of time – some as repeats, some new – each with his or her own unique personality and ways, and she has been able to work with them all, and to successfully usher them through the system that we call government,” said Cheung’s retirement resolution.

The tributes also made it clear how small a town Cambridge can be, as elected and appointed officials shared stories about their deep roots and intertwined family experiences. Vice mayor Marc McGovern noted that while he and Maher served together on the School Committee and council, they had also been co-workers at the nonprofit Cambridge Family & Children’s Service; DePasquale said he and Albano had been friends since the seventh grade; Simmons reminisced about a School Committee meeting that went on so long – until about 3 a.m. – that Maher “started to grow a beard.”

The council next meets for an inaugural meeting Jan. 1, when new members Alanna Mallon, Sumbul Siddiqui and Quinton Zondervan will be sworn in and sit down with their six returning peers to cast a first ballot to see who will be the next mayor. Each attended Monday’s meeting.

As the council returned to work, Simmons summed up the two-year year and collection of councillors: “We didn’t always get along, but we got it done.”