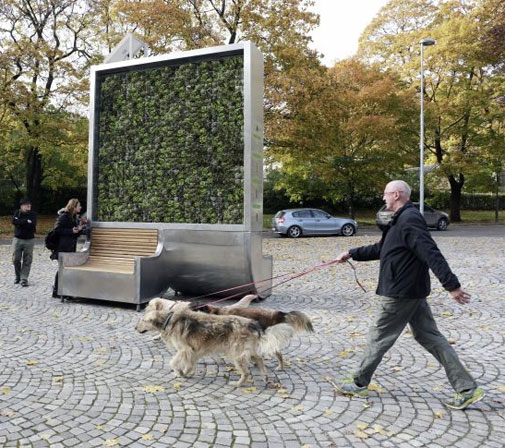 Moss walls will be installed in underplanted areas of the city with $100,000 allocated through the latest Participatory Budget process.

Musical instruments for the high school, resource kits for the homeless and the planting of 100 trees were among the winning projects in the city’s fourth Participatory Budget process, announced Tuesday at a party in Central Square.

More than 6,778 residents age 12 and older voted to decide how to spend $867,000 on capital projects to improve the community, a 43 percent increase from last year, officials said.

Each resident was allowed to vote on five of the 20 final projects, down from 608 ideas submitted to budget delegates to consider.

Funding was announced at $800,000 as six days of voting got underway Dec. 2. “I am pleased we were able to invest $67,000 more in funds to allow a seventh winning project to be selected,” City Manager Louis A. DePasquale said.

The winning projects and their budgeted amounts:

New Musical Instruments for the high school ($200,000): Most instruments at Cambridge Rindge and Latin School were acquired used in the first place, backers said. The funding will update the piano lab, where each piano is at least 15 years old, strings and band departments, electronic equipment and instruments needed for big band and jazz ensembles and classroom and production equipment for the vocal program.

Flashing Crosswalks for Safer Streets ($176,000): Rapid flashing beacons will be installed at 10 high-risk crosswalks to increase the visibility of pedestrians, especially at night, and prevent crashes.

100 Trees for a Cleaner, Greener Cambridge ($141,000): One hundred trees will be planted in barren areas such as Binney Street in East Cambridge and on Massachusetts Avenue north of Porter Square.

Drinking Water Across More Parks ($100,000): Water fountains and bottle-fillers will be installed at as many as 10 parks lacking them; about one-third of Cambridge parks do not have drinking fountains.

Jade Chain: Living Moss Walls to Combat Pollution ($100,000): Moss walls will be installed to bring life to underplanted areas of Cambridge such as Porter, Inman and Harvard squares and Binney Street, possibly customized with benches or solar charging stations.

Upgrade the Gately Youth Center ($100,000): Gately’s furniture, music studio and kitchen will get revamps. “Cooking is something done at Gately every day, but the limited space and worn-out appliances make the activity difficult,” backers said.

Critical Resource Kits for the Homeless ($50,000): Supplies such as socks, feminine hygiene products, toiletries, first aid kits and other items will be delivered to Cambridge’s homeless through established programs.