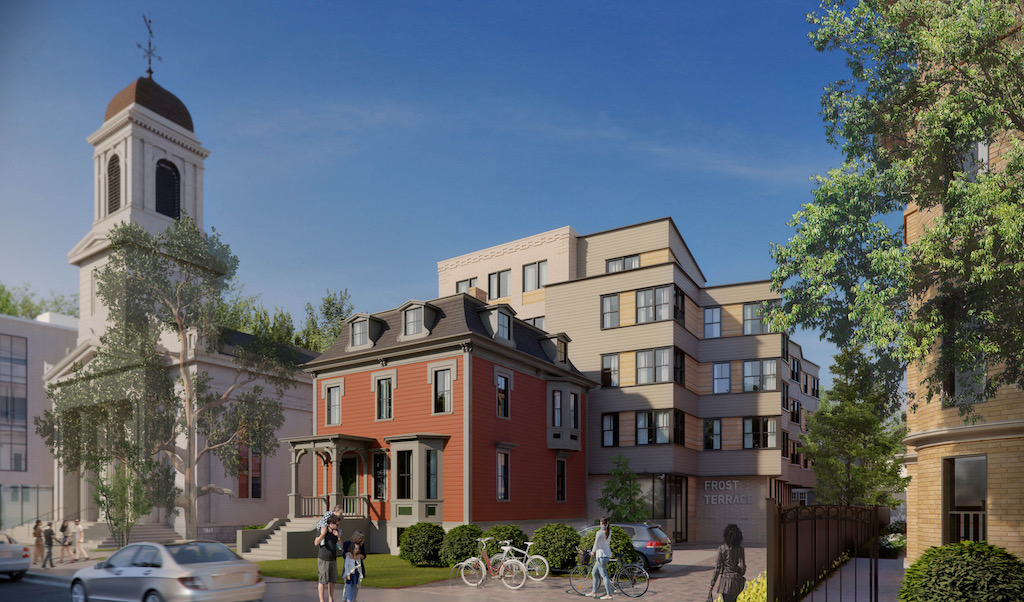 A rendering of Frost Terrace, which won approval Thursday to be built near Porter Square. (Image: Bruner/Cott Architects)

At a contentious 3.5-hour hearing Thursday, the Board of Zoning Appeal unanimously approved a comprehensive permit for Frost Terrace, an all-affordable 40-unit residential development at 1791 Massachusetts Ave., near Porter Square.

If the project gets its hoped-for state funding, construction would start in 2019 and finish in mid-2020. 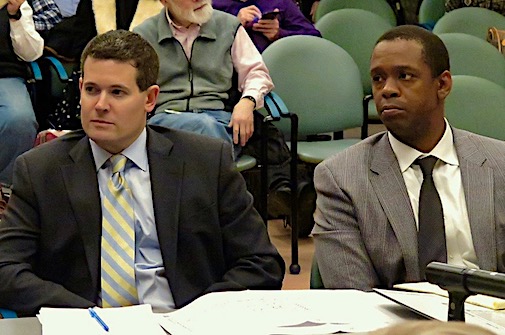 Jason Korb and Sean Hope present to the Board of Zoning Appeal on Thursday for a permit to build Frost Terrace. (Photo: John Hawkinson)

The project leads, developer Jason Korb and local attorney Sean Hope, had recently worked together on Port Landing, a 20-unit affordable housing development in the Area IV/The Port neighborhood; the project design was led by Jason Forney of Bruner/Cott. The project is backed by the city’s Affordable Housing Trust, which provided money to buy the land the project will be built on.

A main issue was parking, because the project proposes no onsite parking – except for three spaces reserved for handicapped residents and guests. The developers expect that about 20 residents will own cars, and will park on the streets of the surrounding neighborhood. The only voices in opposition at the hearing were a half-dozen nearby abutters, most from Newport Road right behind the project, who use those same street parking spaces and would be forced to compete for them. They were counterbalanced by more than 30 supporters, including affordable housing advocates and Porter Square area residents. More than 110 people attended the hearing. There were also scores of letters to the board in the file.

Comprehensive permits, part of the so-called “anti-snob zoning act” in state law’s Chapter 40B, are designed to encourage the development of affordable housing by speeding approvals. All permitting takes place in one place at one time – in Cambridge, before the BZA. Input is sought from other boards, and generally the petitioners meet with and present their project to those boards in an advisory fashion. Unlike in some other communities that have less than 10 percent affordable housing, there is no expedited and sympathetic right of appeal for developers.

Frost Terrace sought 18 exemptions from Cambridge zoning: multifamily dwelling in the Residence B zone where it would normally be prohibited; reduced setbacks between the project’s multiple buildings; reduced open space; a fivefold increase in density, with a floor-area ratio of 1.8 instead of 0.38; a maximum height of 55 feet instead of the required 35 feet; multiple structures instead of a single one; an exemption from required parking; and a second curb cut. 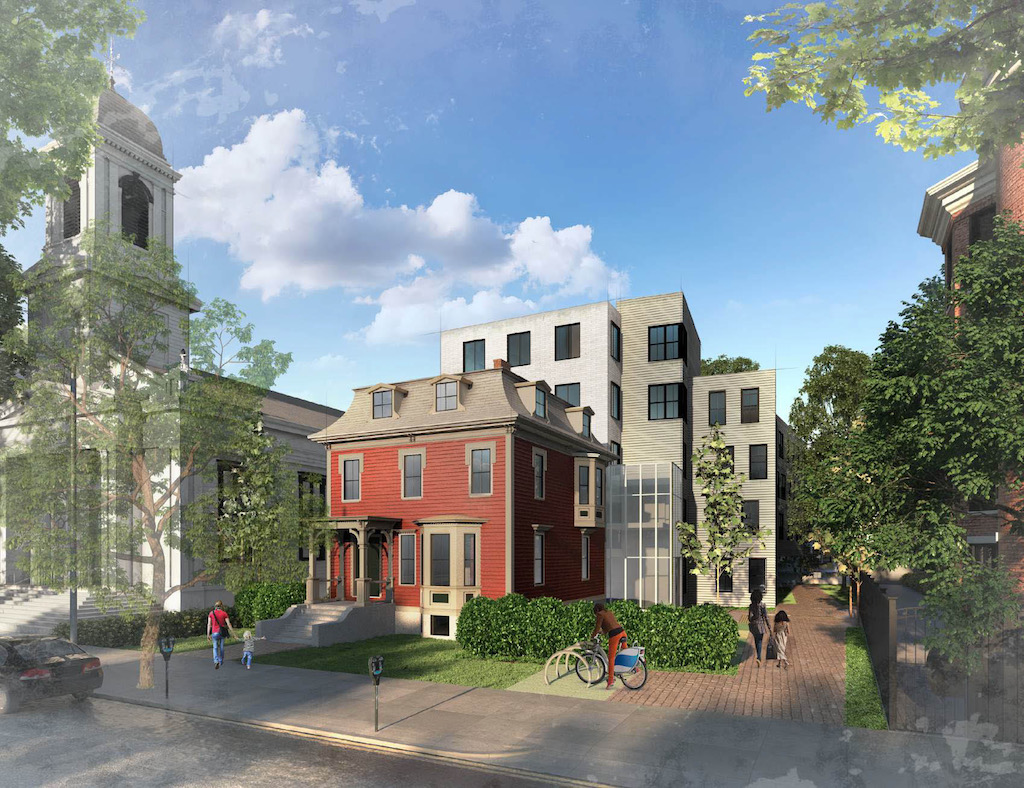 A rendering of Frost Terrace as seen Dec. 5 by Planning Board members, who had significant concerns. (Image: Bruner/Cott)

The Planning Board saw the project Dec. 5, and had significant concerns about the appearance of the project.

“I’m not sure about the size and scale in general, but I’m real sure about the design and the detailing. I think it is horrendous,” member Steve Cohen said. “Notwithstanding our strong and unanimous support for the laudable goal of affordable housing, that cannot and should not mean that anything goes. Yes, we will compromise certain zoning restrictions and may even loosen up a little bit on some of our ordinary high design standards, but not to throw them out the window altogether.”

Other members were less blunt. “I would not be at all opposed to seeing a second crack being taken at it,” Catherine Preston Connolly said.

“This just doesn’t seem to me that it fits in,” H Theodore Cohen said. “I would like to see some attempts made to bring it into the context of the neighborhood.”

The developers responded. They delayed their BZA hearing a month, and made four major changes to the design: more detail in the south façade; a main entrance in brick instead of glass; an adjustment of the fourth and fifth story to better transition from the historical mansard house on the Massachusetts Avenue side of the project; and reducing the scale of additions to the rear buildings at 1 and 2 Frost Terrace.

Staff to the Planning Board (but not the board itself) reviewed the changes Jan. 3 and said they “greatly improved the project’s fit with its context and also better preserved the character of the site’s historical buildings.” 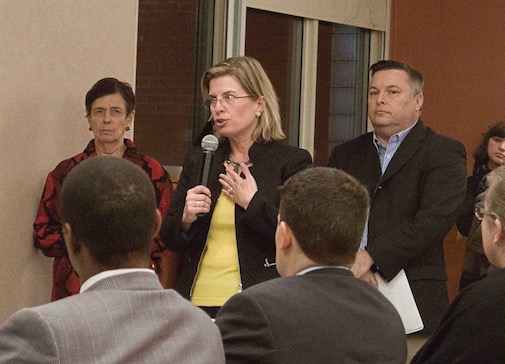 As the developers presented to the zoning board on Thursday, there were questions. Constantine Alexander, who was reelected chairman of the BZA for 2018 at the start of the meeting, was particularly concerned with the governance structure of the corporate entities running the project. It’s complex, with a for-profit “limited dividend organization” approved by the state’s Department of Housing and Community Development and funding from organizations willing to pay for some parts of the project but not others.

Korb was adamant in telling the board that the project would be affordable forever – in perpetuity – and that policymakers had learned the lessons from the “expiring use” affordable housing that lasted only 30 years, leaving ticking time bombs. 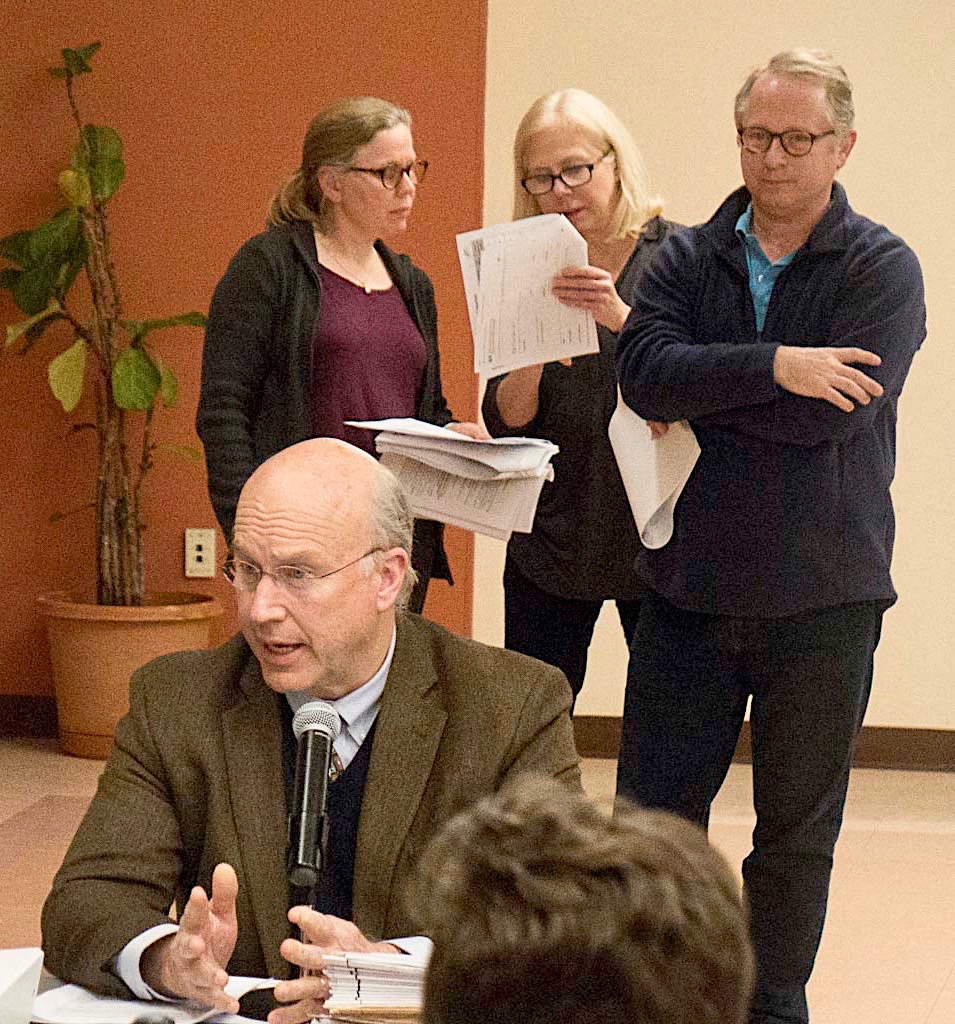 Larry Beals, consultant to residents of Newport Road, who stand behind him, pleads their case regarding Frost Terrace. (Photo: John Hawkinson)

Korb said he and Hope would sell 99.99 percent of the project to a tax credit investor, and would themselves retain only 0.01 percent of the tenant entity – the entity that leases the property from the landlords (also Korb and Hope).

Alexander tried to limit their time, first to two minutes and later to one minute, saying that the board recognized the importance of affordable housing and would like to hear new arguments and positions.

Decker told the board that “in my almost 20 years of elected office, this is the first time, or maybe the second time” appearing before the BZA, as she generally stays away “as a matter of protocol and courtesy and respect. … This is an opportunity that we cannot walk away from … it’s game-changing and it’s life-changing. … I understand the tradeoffs are not going to be comfortable for everybody involved.”

Ruth Ryals, representing the Porter Square Neighborhood Association, told the board that although group members had problems with the parking and density, a majority supported the project.

The Newport Road abutters hired a consultant, Larry Beals, who raised a number of technical concerns with the board. Although the board gave him 10 minutes to make his case, members were generally not receptive, noting most of the technical concerns were the responsibility of others in the city. In response to concerns about stormwater, the board did add a condition to the permit requiring that stormwater runoff not be discharged onto adjoining properties short of an exceptionally powerful storm event. The petitioners suggested that Public Works regulations would require that regardless.

Abutter Stephen Diamond, of Frost Street, said he thought the lack of parking was “unacceptable and demeaning to this project.” Frost suggested, “blasphemous[ly],” that instead of preserving the historic mansard house at the front of the lot, the project could have used the money to build parking.

“Charlie Sullivan does not agree with you,” Alexander replied, referring to the executive director of the Cambridge Historical Commission.

Alexander led off in evaluating the project: “There are serious issues about parking,” he said, and it would be a big problem, but “it’s a fact of life. And the price I think we’re going to have to pay if we want to have affordable housing in this part of Cambridge.”

George Best noted that Cambridge was changing, and cited the example of the protected bike lane on Cambridge Street and the resulting complications parking and getting to businesses such as Skenderian Apothecary. They are all things Cantabrigians need to get used to, he said.

Janet Green said she was really struck by the heartfelt comments from the public, and that even those who were opposed to the project were generally supportive: “There’s this problem, or that thing we like or whatever. … on balance this project has really gone far in trying to find best solutions and working.”

“What troubles me is the idea or concept that lower-income people maybe don’t deserve parking spaces,” Andrea Hickey said. “The overwhelming benefit of providing these type of units sort of causes me to put the parking issue aside.”

Patrick Tedesco complimented the design team on being responsive to the Planning Board comments, which he generally agreed with. He also praised the project for housing 40 families who otherwise wouldn’t be able to live in Cambridge, and “let’s not compare that to 2 feet in an attic dormer,” referring to a more typical sort of BZA case.

This post was updated Jan. 16, 2018, to clarify comments by Patrick Tedesco.