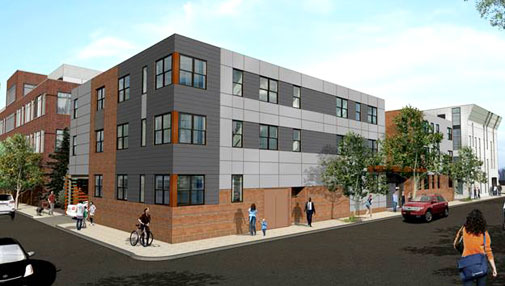 The Port Landing project is shown in a rendering provided by MassDevelopment.

A 31,100-square-foot, 20-unit affordable-housing development called Port Landing, intended to be built on a vacant parcel near Kendall Square, has won a $4.9 million tax-exempt bond from MassDevelopment, the builder and state agency said Wednesday.

The project broke ground a few weeks ago, but an official groundbreaking ceremony is planned for this month, developer Jason Korb said.

The building is on the next block from Green Rose Heritage Park and a block south of businesses such as The Garment District, Beauty’s Pizza and Tatte Bakery & Cafe. The name alludes to a historical name for the neighborhood, The Port, that some longtime residents hope to see replace the planning designation in place since the 1940s, Area IV.

An effort is also being made to stress connections with the city’s innovation-industry district. “By transforming a vacant parcel into affordable housing, Capstone Communities is embracing the creative, hardworking and innovative spirit of Kendall Square,” MassDevelopment President and CEO Marty Jones said in a press release.

“We are proud and honored to begin construction on Port Landing, an incredibly important building that will house hardworking families and individuals in the heart of Kendall Square/Area IV. Port Landing is the only new-construction, 100 percent affordable development to break ground in Cambridge in 2015.”

They credited MassDevelopment for its support, “providing multiple predevelopment financing sources” and issuing the development’s tax-exempt bonds. In addition to the bond, it helped with the approval of federal low-income housing tax credits, which added roughly $3.5 million in equity, they said. Cambridge Trust bought the bond.

“We are thrilled to have MassDevelopment as a resource and partner as we create desperately needed affordable housing in one of the commonwealth’s and country’s most expensive housing markets,” the developers said, adding that the project is expected to support 36 construction jobs.

MassDevelopment, the state’s finance and development agency, works with businesses, nonprofits, financial institutions, and communities to stimulate economic growth. In the most recent full fiscal year it reported financing or managing 314 projects, generating investment of more than $2.9 billion in the state economy and building or rehabilitating more than 1,600 residential units.

The August opening of the building will mark the happy end of a saga in Cambridge development.

In the hopes of winning a zoning change in the 1990s, Needham-based developer The Bulfinch Cos. gave the 10,000-square-foot parcel and $1.6 million to a group called Neighbors for a Better Community. The money was to benefit the community in specific ways, but filings showed the $1.6 million dwindling with little or nothing to show for it while NBC leader Jackie Carroll and her son Jonathan “Jay” Carroll drew salaries and other benefits as group leaders. In another controversy, the land was deeded to 131 Harvard St. LLC for $100,000 in 2010, seemingly leaving hundreds of thousands of dollars on the table, before finally coming to Capstone Communities and Hope Real Estate Enterprises.