Organizers of a daylong Parents Summit to be held May 12 to discuss public school issues.

Better student transportation options got a boost from the School Committee on Tuesday, with calls for fully subsidized MBTA passes for low-income students and changes to bus routes.

The committee joined the City Council in asking school administration and City Manager Louis A. DePasquale to explore implementing fully subsidized student MBTA passes for low-income students. Students now may buy a monthly T pass at the subsidized rate of $30, but that amount still “can create a financial barrier for students to attend school, access food and health services, as well as explore and benefit from the full assortment of programming offered in our community,” said a motion by Mayor Marc McGovern and members Laurance Kimbrough and Manikka Bowman (who was absent). The goal is implementation for the next school year.

A related motion by McGovern, vice chairwoman Kathleen Kelly and member Patty Nolan – similarly being addressed by the council – aims to improve bus routes serving Cambridge Public Schools students. There has been growing awareness (by adults, anyway; many students have been long aware) of inequities in public bus availability and timing from different parts of the city to the schools – such as the dedicated bus route to and from the high school to West Cambridge; the topic arose in discussions about school tardiness. Given that there are no school buses for Cambridge Rindge and Latin high school students, the motion asks school administrators to provide “a description of which changes to bus routes, directions and times would most equitably serve CRLS’ student population.”

These were among several issues coming to the full committee from recent subcommittee  discussions, and members seemed to be on the same page for much of the evening, easily passing unanimously all motions on the agenda. In addition to responding cautiously to a presentation on initial joint work between district administration and the educators’ union on the possibility of adding school hours or days, the group fairly quickly passed 24 contracts, awards and revisions to gender-related vocabulary in school policies as well as six member-proposed motions.

CRLS student academic equity. Particularly in light of ongoing discussions about the high school attendance violation policies and how students and families learn about failing and near-failing grades, the committee passed a motion by members Emily Dexter and Kimbrough asking for a report on the number and percentage of students with a current grade point average of D or lower, as well as ninth-graders who have failed at least one class, by subgroups such as gender or race. The language stressed “particular attention to African-American, multiracial and Latino boys,” to align with what Kimbrough said he is hearing in his curriculum and achievement subcommittee. The data are expected to be presented in July.

Sexual harassment. Members also wanted an update on efforts to decrease sexual harassment at district schools since the announcement of an “action plan” a year ago. A motion by Kimbrough and Nolan asked for an update on “professional development regarding supporting our teachers to support our female scholars and specific details about the current work in the district with our male students that addresses hyper-masculinity and creating anti-sexist spaces for females.” The motion made reference to female students writing in the school’s Register Forum newspaper “to express their concerns regarding discomfort as a female student at CRLS.” 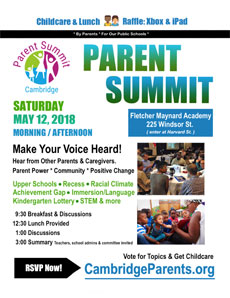 Family engagement and elementary schools. The committee agreed to hold a “roundtable to discuss school and classroom-level staffing” at elementary schools before Oct. 15. Under new rules, roundtables may be televised with a majority vote at a previous regular committee meeting.

Members Fred Fantini and Bowman also sponsored a motion to “go on record supporting” a Parent Summit scheduled for May 12 to “direct the superintendent to be supportive” and to “continue dialogue and engagement with parents and organizers of the summit.”

The May 12 event will run from a 9:30 a.m. check-in and light breakfast through a 3:15 p.m. closing summary that will be open to the community, with local education officials expected to attend. Otherwise, the event at Fletcher Maynard Academy, 225 Windsor St., in The Port neighborhood, is meant to bring together parents and caregivers from across the school district to “express their thoughts in an inclusive and confidential setting,” organizers said.

Free lunch and child care will be provided. To learn more, RSVP for the event, sign up for childcare and indicate issues that should be discussed, go to cambridgeparents.org.

A motion by Nolan asked to check on updating the district’s health policy in light of the National Association of School Nurses’ and Massachusetts Department of Public Health’s new position that children with head lice should remain in the classroom.

Passed unanimously (with Bowman absent) were the first reading (with a second to follow at the next regular meeting) of changes to 13 school policies to change family- and gender-related terminology. Globally, the language is changing “parent” to “parent/guardian/caregiver” and will now be “themself, themselves, they” instead of gender-specific words. Likewise, “non-binary” will be added to “male/female” and “partner” will be used instead of “boyfriend/girlfriend.”

Also passed 6-0 were contracts of $204,000 for two day and three residential tuitions for out-of-district schools for this school year, $38,000 for students to attend the Compass summer program, $80,000 for translation services, $75,000 for classroom furniture, $320,000 for Chromebooks for high school students; and approvals of a $310 increase in federal Title IIA funding for professional development materials, a $6,000 Gene Haas grant for high school students pursuing metalworking, $42,000 for ongoing professional development by Leslie University for Reading Recovery intervention of at-risk first graders, an increase of $15,000 in federal funds for students with disabilities and gifts of $2,300 from the Friends of Peabody School to the school to buy assistive technology and $100 to CRLS in memory of teacher Sam Bixler to support Comparative Government Studies at the school.