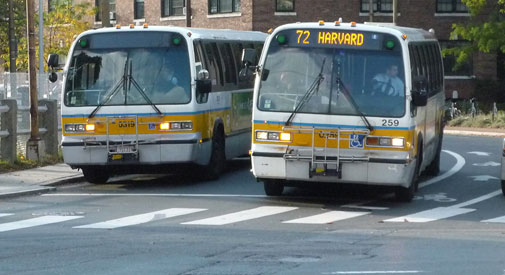 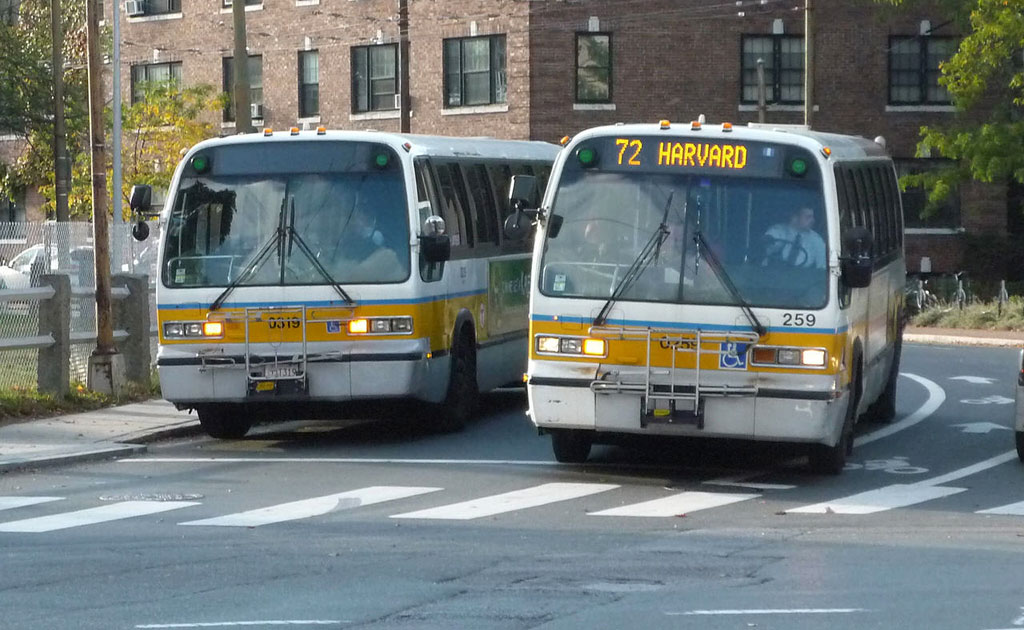 The 72 bus from West Cambridge is practically a public school bus. East Cambridge students could use the similar service. (Photo: Jason Lawrence via Wikimedia Commons)

I live near Kendall Square and commute to high school via the 69 bus, which runs on Cambridge Street. Until this year, it never occurred to me to take the 68, which also stops directly in front of the high school, on Broadway. The 68 bus stop is closer to my house, but is practically impossible to catch in the morning. There are five 69 buses between 7 and 8 a.m. that will get you to Rindge on time; the 68 comes only once during that time, at 7:35 a.m. When I stepped on the 68, I found something very interesting: The stop after mine, Windsor Street, held a large contingent of Cambridge Rindge and Latin School students. Unlike the 69, which has mostly white students on it in the morning, the 68 contingent was entirely students of color. We waited at the Windsor Street stop as each student inserted a dollar into the slow machine. Perhaps the first 10 students got a seat, but there were at least 20 at the stop. Kids were crushed together like sardines.

I began to take this bus every day. That first day was not special. I got onto an empty bus at the Broadway stop opposite Hampshire Street. Five minutes later, the bus was packed. A woman and her little boy also ride the bus every day; when they get off at the relocated King Open School at Fayette Street, she has to push through at least five Rindge students to get to the back door. And any student who lives along Broadway gets no leniency – it’s get on the 7:35 a.m. bus and be extremely late or frustratingly early.

Why is any of this relevant? Because of recent discussion about the attendance violation policy at Rindge. This policy punishes those who arrive late in the morning by lowering their grade – and disproportionately affects students of color. While the right policy is unclear, some causes of lateness are obvious.

This problem has a simple solution: Add another 68 bus weekday mornings.

The Massachusetts Bay Transit Authority has done significantly more complicated things for Rindge students. Every weekday, the 72 bus leaves Aberdeen Avenue at 7:30 a.m. Rather than taking its normal route, it reroutes itself to get to Rindge. I repeat: there is a whole MBTA bus in West Cambridge exclusively for taking predominantly white kids to Rindge; it’s practically a public school bus.

The 68 bus is also not the only example of an MBTA injustice. In an attempt to take the train in the morning, many students without (increasingly expensive) T passes try to jump the subway turnstiles at Alewife. They’re stopped by security, miss the train and arrive late. Their grades suffer.

Every student on free and reduced lunch should be given a free or reduced bus pass or subway pass. These students are paying around $60 a month to get to school and back. On top of that, they’re paying for it with their grades.

Jahnavi Zondervan is a senior at Cambridge Rindge and Latin School.