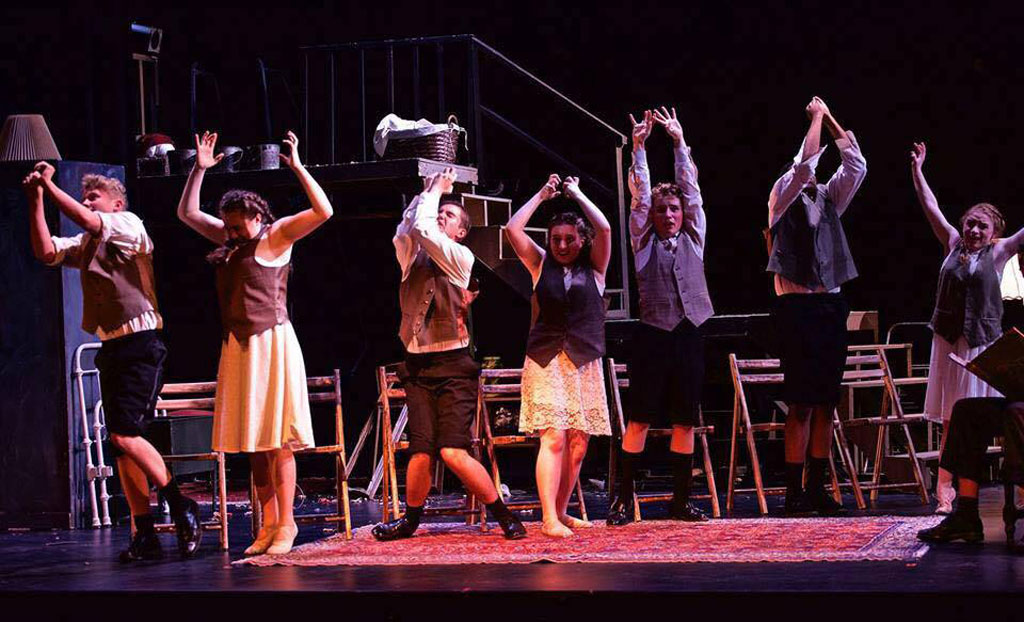 Cambridge Rindge and Latin School students perform “The Secret in the Wings” in 2016. Involvement in extracurriculars such as theater may face the same academic eligibility standards as sports. (Photo: Emily Henry via Facebook)

In their penultimate meeting of the school year, the School Committee returned to issues it’s struggled with for much of the year, including junior kindergarten and extracurricular eligibility requirements, while venturing into questions about the work and role of the committee and whether the administration is sufficiently transparent about its own work.

A motion asserting the committee’s interest in nailing down how to expand junior kindergarten for all children was passed unanimously. After eight years and two studies with no formal committee involvement, the city is set to find a consultant to do a report recommending specific ways to expand access to early childhood education – specifically, universal access for 3- and 4-year olds.

An October 2017 roundtable with the City Council revealed meager progress in expanding capacity (34 new seats for 3- and 4-year olds) amid a focus on improving the quality of existing private preschool programs and subsidizing tuition for 22 children from low-income families. Despite spending years on the issue, officials were still uncertain how many seats existed, how many were high-quality and how many families felt they had access to affordable programs that met their needs.

The current system provides free junior kindergarten only for children who turn 4 between Sept. 1 and March 31. Committee members Manikka Bowman and Emily Dexter have pushed for free access to preschool for all 4-year-olds, although discussions have not resolved whether this responsibility belongs to the school department or to city programs. A motion for a roundtable, combining proposals by both, would face the issue squarely.

Discussion about requirements for a minimum grade average to participate in sports has widened to other extracurriculars, with theater prominently in play.

Sparked by a last-minute benching of a senior hockey player who did not meet the requirement when grades were turned in – and, the family maintained, had no warning he was in jeopardy – the committee and administration have debated how to improve communication, what eligibility requirements should be and even whether to keep them.

A motion by Dexter and Laurance Kimbrough on June 5 directed the committee to work with district and high school administration “to review and revise requirements for participating in all CRLS-sponsored extracurricular activities, including athletics and theater.” The goals, the motion said, should be creating appropriate supports for student success and ensuring equity – meaning that while the conversation then asked whether athletes should face requirements if kids in theater do not, now it suggests applying the rules to all.

Superintendent Kenneth Salim warned that the whole menu of extracurriculars makes this too complicated. Kimbrough pushed back, saying that in his experience as a CRLS guidance counselor, only athletics and theater are the major time-consuming activities.

McGovern chartered the motion, suggesting the motion-makers work with the superintendent and return with another motion.

The district’s attendance violation policy, which seeks to improve high school attendance by lowering course grades for four unexcused absences or 12 unexcused tardies, has drawn several meetings this school year by an ad hoc subcommittee run by Dexter. In January, just before first-semester grades were due, the committee voted to suspend the practice of lowering a course grade by 10 percent after seeing data that the policy disproportionately affected students of color and low-income students, and discovering that many students were unaware of a “buyback” policy that allowed grade restoration with extra work. For this spring semester, the policy stands, with a 10-point penalty and buyback option.

After four meetings with students, families and school officials, Dexter was ready to seek full committee input, seeking a sense of whether members were ready to agree to having no grade penalty – which she tried by submitting a motion for the committee “to encourage” the administration to work with Cambridge Rindge and Latin School faculty to identify “consequences other than grade reduction.”

Bowman misinterpreted the goal and scolded Dexter for misusing committee time by “not doing the work … I was expecting that the subcommittee would come back with a recommendation.”

Patty Nolan, who with Kathleen Kelly has been part of Dexter’s subcommittee for its several meetings, explained that “she was trying to get input from others on the committee” on what was, essentially, the recommendation. (Kelly’s contribution: that the motion “should be from the subcommittee rather than from an individual committee member.”)

“I appreciate wanting to get everyone’s input,” Mayor Marc McGovern said. “But if you have not participated” in subcommittee meetings,“don’t jump in and say ‘I didn’t know anything about this’” when a recommendation does come to the full committee. The motion was referred back to Dexter’s subcommittee.

Union input – or not

Moments later, Bowman made her own interesting move on behalf of her governance subcommittee (which includes Fred Fantini and Nolan as members). Without comment she put “on file” her motion to allow the educators union president to speak for six minutes instead of the usual three at public comment, and to state the intention of the subcommittee to invite the president “on a periodic basis” to provide updates to the subcommittee.

The issue goes back to a Jan. 2 motion by Fantini to have the Cambridge Education Association president join the committee and student members at the table. The issue was sent to Bowman’s subcommittee. On Feb. 6 she proposed a motion, then calendared it herself. When the motion returned March 6, she moved to return it to her subcommittee. A “new” motion, this time formally from the subcommittee, appeared May 15, but the language was identical. Bumped to this June motion by Fantini’s May 15 calendaring of the bulk of the agenda at 9:15 p.m., after lengthly public comment and a presentation, Bowman moved this time “to put it on file,” permanently ending it before any committee discussion.

Program evaluation. In her ongoing effort to get evaluations on program effectiveness, Nolan submitted a motion to get any existing reports on the Compass summer program and to direct that assessment data be collected before and after this summer’s session, with reports to the committee this summer and fall. It was passed unanimously. Compass is a six-week kindergarten-through-sixth grade academic program run with Lesley University that operated for 42 years, according to Patricia Crain de Galarce, a Lesley associate dean. Nolan said that she has never seen an analysis.

Student internships. Fantini’s motion to get a comprehensive report on student internship programs was also passed unanimously. “We have some great individual initiatives,” he said, “but they are not framed by a system that would ensure that more kids get equal access.” He gave as an examine biotech companies in Kendall Square that kids saw “as a gated industry,” while Fantini said he’d heard from people in the tech industry that it was hard to set up internships with CRLS.

Family liaisons. The committee also passed a three-year contract for family liaisons, with Kimbrough alone in voting against the contract. (His request to discuss salaries publicly was denied). “I respect the work of Ms. Kelly and Mr. Fantini” in negotiating the contracts,” he said afterward. “I just wish we could pay our liaisons more money. Our liaisons deserve better than what was agreed upon.”

Sharing information. A Nolan motion to create a mechanism for committee members to share lessons learned from taxpayer-paid trips to educational conferences stumbled over the details of what that mechanism might look like: Reports? Presentations? A roundtable? There seemed to be some resistance to the implied extra work. The motion was kicked to the governance subcommittee.

Smaller items. The committee passed unanimously the first reading of revisions to the Rights and Responsibilities Handbook to align with the new state Pregnant Workers Fairness Act, with Dexter noting that next year she intends for the school climate subcommittee to tackle a full review of the “language.” The committee also passed unanimously a $38,000 contract for out-of-district day tuition for the current school year; and acceptance of miscellaneous small gifts.