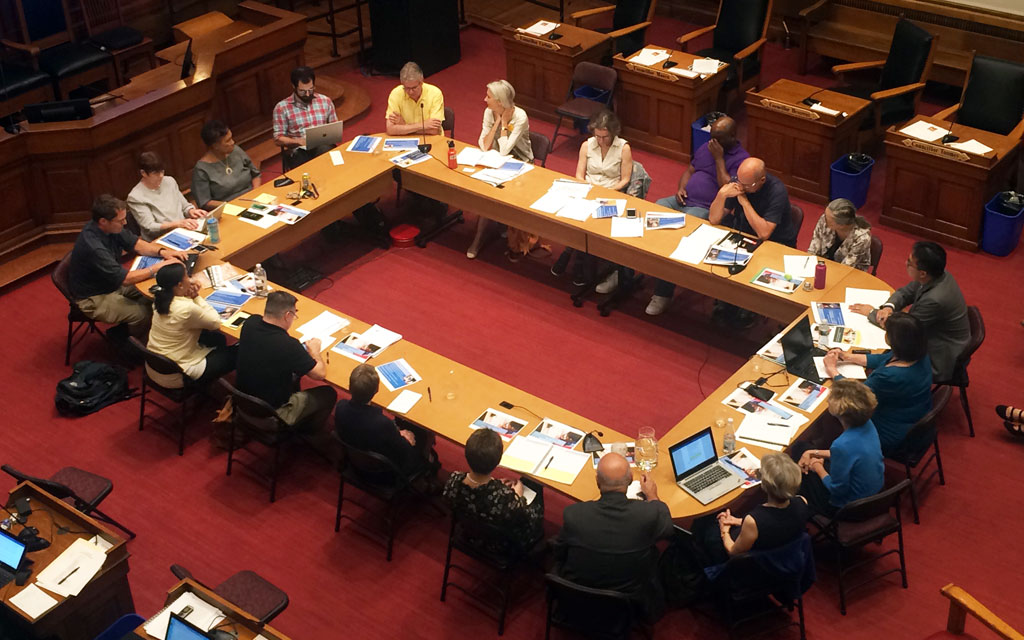 Progress on plans for universal preschool in Cambridge is promising, but needs to go a lot faster, officials said at a Tuesday roundtable on early education with City Council and School Committee members. A wait list for early education classrooms reached 800 families – it is now frozen – as the city created two classrooms, started a subsidy program and geared up for a consultant’s study of the issue, which will follow studies from 2011 and 2015.

The study would also clear up a debate over whether to build a couple of giant centers for early childhood education, or a series of sites that would serve their immediate neighborhoods.

Task force members reported small progress in providing for families shut out from preschool (meaning, before kindergarten) due to a shortage of seats or prohibitively high price tags: 34 new seats and scholarships for 22 more students at existing programs. They also appear to have made considerable progress in conceptualizing what “quality preschool” is and how the city might provide supports to parents and all providers – whether they be city- or school-run programs, private providers or family day care – to improve quality.

The goal is to provide more city- and school-based slots while supporting alternatives – from home day care to private preschools offered by a variety of providers. “It’s a question of affordability and quality,” School Committee vice chairman Fred Fantini said. “We don’t want to put all of these [child care providers] out of business.”

The council decided in 2010 to have a blue ribbon commission address the topic, and it issued a report in October 2011. Another two years later, in September 2013, an earlier council and committee roundtable asked for the task force, which worked for 15 months to produce a report heard in November 2015.

With 34 seats added in two years, at this rate Cambridge will never reach scale, elected officials worried. “I thought when I first heard about this, there would be five years of revving up and then we will really get going,” city councillor Dennis Carlone said, expressing at length the urgency he felt and distress over slow progress. “I’m not sure now.”

The drafting of a bidding document for a consultant to recommend what options and models Cambridge might consider made it clear the task force is still looking for more definition of the problem. “Universal child care means different things for different people,” Spinner said, explaining the request for proposals.

Clarifying after the meeting, she added, “Some people may think a universal preschool program is free to all families, whereas some members tonight were talking about sliding-scale fees to make it affordable. The other thing is: Is universal pre-kindergarten provided by the public school program, or is it provided by a variety of programs meeting the different needs of different families?” Officials also hope a consultant will review what other cities are doing.

And younger. Cambridge’s Department of Human Services Programs also runs seven Special Start preschool classrooms for kids aged 2 years and seven months to 5 years old. Semonoff, who heads the department, confirmed that the wait list for these classrooms was recently frozen at 800 families as staff try to find out how many of those families are actually still waiting. “We were not wanting to shut parents off, but at the same time it made no sense to continue,” Semonoff said. The city hopes to know what to tell the families it has been able to contact – about 500 of them – within six to eight weeks.

It could ease a situation vice mayor Marc McGovern described, in which word on the street was that you need to get your children on that wait list as soon as they turn 1. Parents are literally conceiving with an eye to getting children born in the dates that can take advantage of city programs, officials said.

Staff still don’t know how many children need to be accommodated: How many infants and toddlers are in Cambridge? How many existing programs – from “preschool” to family day care – meet “quality standards”? How many families are paying more than they can reasonably afford? How many families would prefer a full-day program but can get only half-day? Also, as councillor Leland Cheung and School Committee member Manikka Bowman suggested, how many families are being forced out of Cambridge because they cannot afford both housing and child care? How many parents are forced to give up work to provide child care?

Many members also pointed out the unknown impact of massive new housing developments in the NorthPoint and Alewife neighborhoods and from the 1,400 units expected to be built on the Volpe site in Kendall Square. Carlone bemoaned the fact that the new King Open/Cambridge Street Upper School building going up only has two new preschool classrooms. “That to me is silly,” he said.

“We need numbers,” School Committee member Emily Dexter said. Without it, it’s impossible to measure progress, she argued. “I don’t know if 22 scholarships are a lot or a little, because I don’t have the baseline.” She called for specific goals and a deadline to be set by the end of the year, suggesting that three councillors and three School Committee members be added to the task force to set this policy – a move that was not merely not echoed, but criticized as unnecessary by Fantini. There are no elected officials on the 25-member task force.

The consultant will also presumably recommend whether the approach should be through incremental additions of a classroom or two per site, or the creation of one or more large sites. Elected officials disagreed on the best approach.

Saying he toured the Capuano Early Childhood Center serving nearly 400 kindergarten and pre-kindergarten kids and their families in Somerville, councillor David Maher said there “is not a shadow of a doubt in my mind that that is the long-term look.” Finding land for a large center will be difficult, he said, but not impossible.

Cheung repeated his call to see the upcoming revision of the Tobin/Vassal Lane Upper School building include a large preschool center, perhaps matched with one in East Cambridge or at the Longfellow Building swing space on Broadway.

But councillor Jan Devereux – who co-sponsored an examination of the model in May with Cheung – disagreed. “When councillor Cheung talks about 600 [preschool] kids at the Tobin building,” she said, “I think about 600 cars coming to one place.” She joined Carlone in favoring smaller neighborhood sites, even suggesting the use of vacant storefronts as sites for classrooms.

Fantini suggested that current Special Start sites offering half-day care could be pressed into double duty, and use the other half of the day.

Bowman – who, like Cheung, has small children – argued that relying on large sites will take too long, leaving “a generation of kids behind … This challenge cannot wait until we have the [new] physical space,” she said, pointing out that she was unsuccessful at getting city or school department preschool. “We can do a both/and approach” of new construction and providing relief to increased access to existing programs, she said.

But Cheung, who touted his child’s Tobin program as extraordinary, said that “although the last time we did I was pretty frustrated with the lack of progress … I gotta say, I’m really, really frickin’ impressed. It’s amazing.”

A report filed in 2015 by the task force recommended that the School Committee explore expanding junior kindergarten. Repeated efforts by Dexter to urge the committee to study and pilot expansions have been rebuffed by most of her colleagues, who instead say they are deferring to the work of the task force.

In addition, Tobin Montessori and the Fletcher Maynard Academy also have seats for 3-year olds – again, a great asset, Dexter said, but only if you have luck in the lottery.

The wide range of family incomes in Cambridge plays a critical role in the expansion of universal preschool. “How will we define affordability?” Spinner suggested as a question for the consultant. Free junior kindergarten or preschool scholarships have different impacts depending on family income, and many officials stressed that even “middle class” families have trouble affording preschool care.

Task Force members acknowledged these and other tensions, with Spinner saying that many of these issues will be incorporated in the upcoming request for proposals.