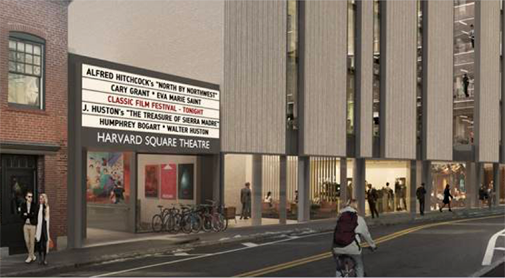 Developers will provide an update Tuesday on the future of the former theater on Church Street in Harvard Square.

The council will be asked by the city manager to free up $2 million to start improving living conditions at the city’s aging firehouses, according to the night’s agenda – mainly smaller items while the city figures out how to handle the challenges presented by major repairs (such as the temporary relocation of employees and services).

There are also some issues relating to climate change, the environment and green technology coming out of the City Manager’s Office, including a look at changing over the city’s many flat roofs to better handle coming onslaughts of rain and snow – which, while requiring construction, could also add square footage (albeit at an angle) to properties; allowing the testing of autonomous vehicles at certain locations in the city by companies approved by city officials; an update on noise issues associated with flights in and out of Logan Airport; and a report back on using 100 percent renewable energy by 2035.

A revised draft of a Surveillance Technology Ordinance will also be received.

The city is working on a standard pavement marking for separated bike lanes to remind cyclists to yield to pedestrians at crosswalks, the City Manager’s Office says, and councillor E. Denise Simmons has an order that city staff has to “conduct a much more thorough process” for hearing from residents – particularly seniors – before installing bicycle lanes on South Massachusetts Avenue.

With recreational marijuana sales just around the corner, councillors Sumbul Siddiqui, Quinton Zondervan and Alanna Mallon are asking city staff to make sure Cambridge residents benefit from the industry, especially “people from communities that have been disproportionately harmed by marijuana law enforcement”; when it comes to using marijuana, councillor Craig Kelley says he’s aware that current law is “inherently unfair” and he will be exploring “options to allow some legal ingestion in public areas in Cambridge” – potentially affecting forms that have “little, if any, noticeable odor or secondhand effects,” but also potentially leading to a “cannabis cafe” ordinance, as mentioned during recent council meetings.

Simmons is also asking for “a dynamic new initiative” to set residents of The Port neighborhood on paths to jobs “with family-sustaining wages”; councillor Tim Toomey is asking that a suitable honor be found for the late comedian, pundit and warrior against sexual abuse Barry Crimmins – and that it be around Springfield Street in Inman Square, where Crimmins’ Ding Ho comedy club essentially launched the comedy boom of the 1980s and the careers of comics such as Steven Wright, Kevin Meaney, Denis Leary, Janeane Garofalo, Bobcat Goldthwait, Paula Poundstone, Jimmy Tingle and Lenny Clarke.

Gerald Chan starts the public process for his mixed-use office/retail redevelopment of the 10 Church St. Harvard Square Theatre. The project is intended to have a two-screen commercial cinema on its lower level. Chan will seek a certificate of appropriateness from the Historical Commission before filing for a Planning Board special permit for the project. The meeting will “provide an update” of the design and seek feedback.

A zoning petition by Alewife neighborhood residents Doug Brown and Mike Nakagawa go before the Planning Board and the City Council’s ordinance committee for hearings about provisions that include scores gauging environmentally friendly construction, taller buildings under some circumstances and potential changes to how developers would handle setbacks, open space and tree canopy, building access, flood protection, cool roofs, parking, flood barriers, hazardous materials and waste, emergency plans and more.

The board meets on the second floor of the City Hall Annex, 344 Broadway, Mid-Cambridge. The committee meets at City Hall, 795 Massachusetts Ave., Central Square.

Committee head councillor Craig Kelley notes in a report being heard this week that Cambridge’s Information Technology Strategic Plan is five years out of date and does not address cybersecurity. “A review and update of this policy to reflect current technology trends, city business needs and proactive cybersecurity measures is essential,” Kelley says.