November opening is expected for Hotel 1868 in Porter Square, with its Caffè Nero to follow (update)

November opening is expected for Hotel 1868 in Porter Square, with its Caffè Nero to follow (update)

Hotel 1868 is under construction near Porter Square but due for a November opening. (Photo: Marc Levy)

The hotel coming to Porter Square is expected to open as soon as Nov. 1 and host a Caffè Nero in its corner ground-floor retail space, a management team told the License Commission last week.

The Caffe Nero will be the second in Cambridge, after a Central Square location; the coffee shop with all-day breakfast, sandwiches and salads also has locations in Somerville’s Assembly Square and in Arlington, as well as across the river in Boston. There has been talk the coffee shop would also seek a license to serve alcoholic beverages, which hotel guests could bring to their rooms, said Kevin Sheehan, a consultant working on the hotel. But the chain is at least two months out from starting work converting the space from a construction site.

Caffe Nero will be competition or a complement mainly for Bourbon Coffee, which is across the street at 1815 Massachusetts Ave., but will fill a gap left by the Sept. 6 closing of Bruegger’s Bagels at 1876 Massachusetts Ave. 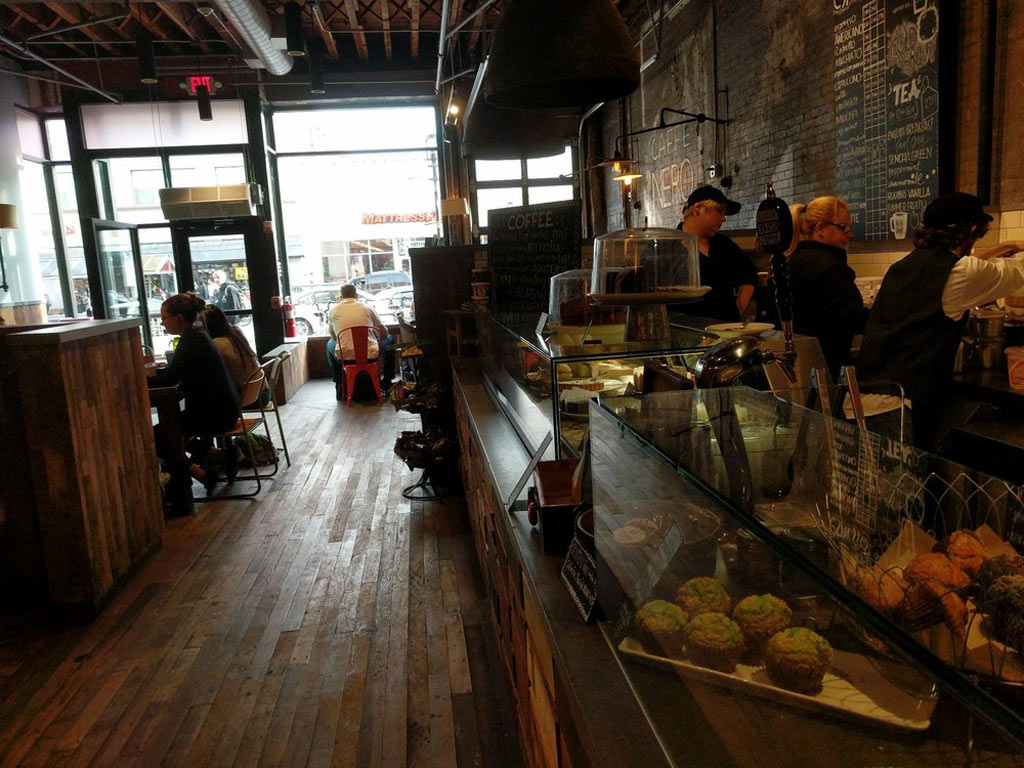 Central Square’s Caffè Nero, at 589 Massachusetts Ave., may be joined by one in Porter Square. (Photo: David S. via Yelp)

Called Hotel 1868 and designed with 50 rooms for 100 occupants, the site’s hoped-for May opening was delayed by a lack of response from the electric utility Eversource, which several years ago also put a lengthy freeze on the opening of the Porter Square Hotel up the street.

“If you ever try to get Eversource onsite and succeed, let me know how you did it,” Sheehan said, to a sympathetic response from commission member and acting fire chief Gerard Mahoney.

Both hotels are owned by developer Peter Lee. An extended-stay hotel by the same developer is being built near Porter Square at Beacon Street and Somerville Avenue in Somerville, and Sheehan said Lee was contacted last week by Lesley University to see if he would willing to develop its parking lot – next to Hotel 1868 and across from its University Hall – for an institutional use.

That was news to Lesley. According to John Sullivan, director of communications for the school, “Lesley University definitely did not speak to Peter Lee about developing the parking lot, contrary to any statement that was made to the License Commission on Sept. 12.”

The opening of Hotel 1868 without a restaurant follows a pattern set at the Porter Square Hotel, where Sheehan said a French-influenced restaurant called Colette is due for opening within the next five weeks with 134 dining seats, 16 bar seats and a 30-seat front patio. Even if Colette had opened in its originally planned window of July or August, there would have been a multiyear gap between its debut and the October 2016 hotel opening, an apparent violation of state law.

But the expected gap between a November opening for Hotel 1868 followed by Caffe Nero several months later didn’t draw questions from commissioners in granting Lee’s team its innholders license.