There’s room for all, so far, as hotels pop up in answer to demands of city development 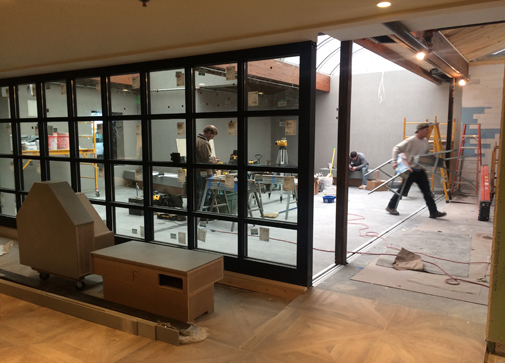 There’s room for all, so far, as hotels pop up in answer to demands of city development

A mini-boom in hotels has brought hundreds of rooms to Cambridge in the past couple of years, and there are hundreds of more rooms on the way, including two more hotels for Porter Square following one opened in October. While that one was focused on international travelers, the next is focused on business travelers; another just over the line in Somerville is focused on extended-stay travelers, and all are by the same developer.

“There’s lots of demand, specifically Porter Square,” said Peter Lee, who originally planned to build 27 condo and rental units at his next project, at 1868 Massachusetts Ave., before deciding to build a 50-room hotel instead. “I have no idea why. But there are a lot of businesspeople, and the downtown hotels are too expensive or too far away.”

The demands of tourism and business travel didn’t just convince the Marriott chain to build a “hip and trendy” 150-room AC Hotel and restaurant in the rapidly growing Alewife area; it convinced private investment firm HHM – owner and operator of 120 properties – to buy the nearby Best Western Plus Hotel Tria in February 2016 and take it independent with a $6 million upgrade.

That rebranded hotel, the Freepoint, opened April 1 with a number of flashy lifestyle upgrades. Gone is the predictable hotel pool, replaced by a three-season “secret garden” atrium with retractable glass and a fire pit; bedroom space has been cut back in favor of bigger bathrooms, all done in handsome subway tile; and for entertainment, Tria’s 36-inch flat-screen televisions have been replaced with 49-inch screens that are ready to connect with visitors’ Netflix accounts, there are iPads rentable at the front desk with podcast collections curated by visitor tastes and a lobby game wall where “ you’ll be able to play old-school Atari games while hanging out in the lounge,”general manager Jennifer Kavanaugh said during a late March tour.

There are smaller touches, too, including umbrellas that will be placed in each guest room and the dog-friendly and localized choices of stuff for sale in the lobby and room minibars, Kavanaugh said. (Example: Expect to be tempted by Taza chocolates made in Somerville, not by M&Ms.) Cambridge native Bryan Barbieri has helped to turn the hotel into something worthy of joining HHM’s Independent Collection and to ensure staff are familiar with the city and able to point visitors in the best direction for experiencing it. Field trips have been adding to staff knowledge.

“Everything’s not dictated to us. They’re not telling us how to do food or amenities,” Kavanaugh said. “We’re not in what I call a brand box. What we’re asking is how do we give our guests a taste of Cambridge?”

Light food service by Matthew Gaudet of shuttered Kendall Square eatery West Bridge and drinks by Alex Howell begin Wednesday, Kavanaugh said, showing off a large lounge and restaurant area – especially when compared with the small kitchen space – that illustrates that there’s more to Alewife than business travel, even though the hotel is touted as being for “modern business travelers.” Freepoint has no business center; travelers who need something printed, such as airplane tickets, can send a file to the front desk.

“There’s been so much development in this area. Probably the last time I was here” before coming to transform and run the hotel, Kavanaugh said, “was 10 years ago. Because nothing took me here.”

The closing of the Inn at Harvard and the loss of its 111 rooms in Harvard Square has made a difference as well. “The educational component is huge,” Kavanaugh said, and Freepoint launched with a plan to run free shuttles to Harvard Square.

“The AC Hotel does not frighten me in terms of saturating the market. This area needed more inventory. We’re good. Maybe if one more hotel went up within a mile-and-a-half radius, that would be concerning,” she said. 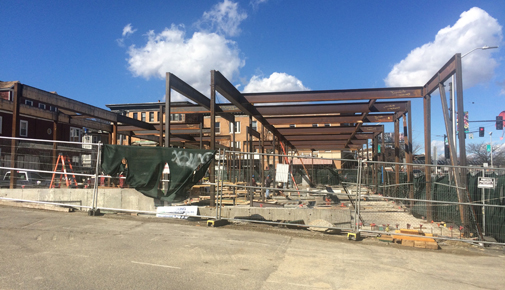 The bones of Hotel Cambridge in Porter Square go up in early March. (Photo: Marc Levy)

In fact, Porter Square is just outside Kavanaugh’s radius of concern, though its three-hotel market isn’t quite in place yet. The Porter Square Hotel opened in late 2016 after more than a decade in development, with the owners eager enough to get a start that the launch took place without either a 5,066-square-foot garden or 125-seat steakhouse. The restaurant was delayed because of difficulty finding workers, including an executive chef.

But a chef should be in place within two weeks, Lee said Tuesday, allowing the restaurant to open in June. The garden is waiting for plants to be delivered and could also be complete by May or June.

Lee is working on Hotel Cambridge, which will open up 50 rooms for mainly business travelers with a potential opening by the end of this year, and the Beacon Street Hotel at 371 Beacon St., Somerville, where 35 extended-stay units are anticipated in the spring of 2018.

Finally, Central Square landlord Patrick Barrett is intending to turn the units he owns atop Cinderella’s Bar & Restaurant, Toscanini’s Ice Cream and Patty Chen’s Dumpling Room into 21,000 square feet of hotel space, for 58 rooms of roughly 320 square feet each over four stories, and a new first-floor courtyard. His hopes to keep the space residential was stymied by restrictive city zoning, he told the City Council.

He hopes for a summer 2018 opening for his Central Hotel.