Presentation after hate speech at high school was about ‘respect,’ didn’t mention incidents 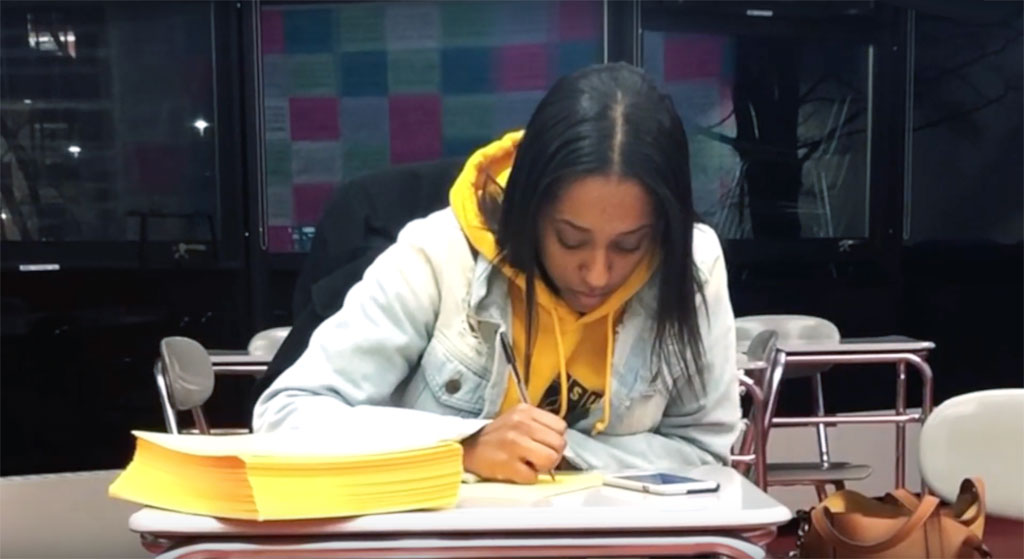 Presentation after hate speech at high school was about ‘respect,’ didn’t mention incidents

The president of the Black Student Union at Cambridge Rindge and Latin School hand writes letters of appreciation for teachers in a video released Friday. (Image: YouTube)

After two incidents at the high school involving hate speech, principal Damon Smith promised the community that time would be set aside Thursday “so that we can engage in a Community Conversation about our core value and motto word, ‘respect.’”

That conversation was held – but it had nothing to do with a swastika formed of spittle found on a stairwell window at Cambridge Rindge and Latin School on Dec. 7 or the “note containing a racial slur and nonspecific threat” to a teacher of color described by police. They were the first incidents at the school involving hate speech reported since several in 2016 around the election of President Donald Trump, but 2018 has seen a citywide spike in such incidents over the previous year and a 10-year average recorded by police.

Instead, the “X-Block” conversation was a generic slideshow prepared far ahead of time and unrelated to hate speech called “How successful is CRLS is in living up to its motto/core value of ‘Respect’?” It dealt with harassment and sexual harassment and even delved into sexual violence.

After parents took note that the X-Block seemed unrelated to the hate incidents, district officials were asked what thinking went into the decision and whether professional advisers were involved. There was no direct answer.

District communications manager Rosalie F. Rippey suggested superintendent Kenneth Salim had also been expecting a conversation dealing with hate speech after a message from Smith referred to being “upset, angry and dismayed” by the incidents but “not afraid, and I believe in the members of our community despite these actions. As a community of students, staff and families, I know we remain committed to making CRLS an inclusive, welcoming and respectful community for all students. In fact tomorrow, our student body will have an X-Block schedule so that we can engage in a Community Conversation … the individual threat and last week’s display will galvanize our efforts to further develop our community.”

“It sounds as if the statement from the superintendent – which I assisted with – misinterpreted his mention of respect as the topic of the next day’s X-Block,” Rippey said. “Upon following up, principal Smith explained the X-Block/Community Conversation had been scheduled and planned in advance of the most recent incident.”

Four such X-Block conversations are scheduled at the start of the year around the school’s core values of diversity, opportunity and respect. “The curriculum for this particular X-Block had been developed collaboratively with students, and there wasn’t time to work with them to make changes,” Rippey explained, after talking with Smith.

Some teachers did bring up the recent incidents while presenting the slideshow, but “it wasn’t mapped out for them or prescribed,” she said.

“Obviously, respect is a foundational expectation that includes not taking part in racist actions or speech,” Rippey said.

Last month, the School Committee heard from students and others about the occasionally racially charged atmosphere at the school, with teacher and Black Student Union adviser Kevin Dua testifying about vandalism directed at their work and a white teacher calling him an “N-word.”

The Black Student Union had its own response Dec. 13 to the threatening note left to the teacher of color, which it posted in a video the next day. In it, the student president of the union is seen writing by hand more than 500 letters of appreciation for teachers, which she and other students then deliver, taping them up on teachers’ office doors and windows.

“When someone goes low, we go high,” the video explains.