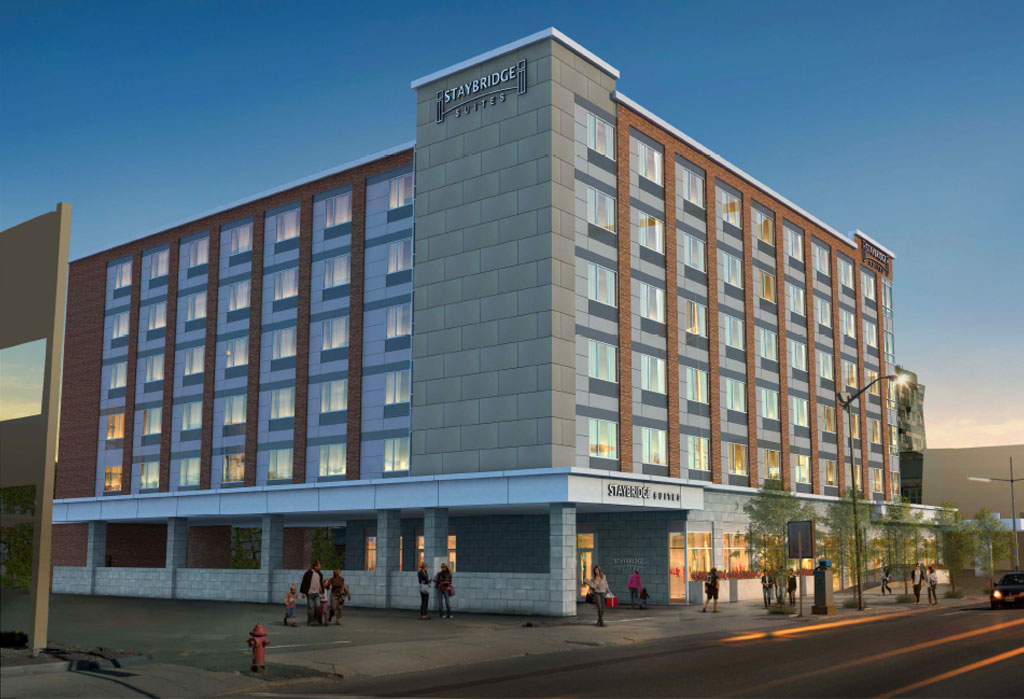 A proposal for a 120-room StayBridge Suites hotel in East Cambridge is on the Board of Zoning Appeal agenda for Thursday.

City Council, 5:30 p.m. Monday. A tree-cutting moratorium is expected to come to a vote after its introduction at a Jan. 9 committee hearing, with backers stressing the likely dire consequences of not stopping tree canopy loss as climate change bears down on the city – and noting that discussion about a moratorium without matching action might sound to some like a signal to cut down trees before they can be stopped from doing it. In real estate issues, there’s an order noting various upzoning efforts, which benefit developers, and seeking ideas for “proportional contributions” to residents to make up for strains put on the city and its residents by the growth, as well as one supporting state Rep. Marjorie Decker’s work to bring back a rent arrearage program to help low-income families pay back rent. There’s also an order asking for a review of the city response to flooding and flood victims, considering the lack of one seen from a water main break in December; an effort to ensure changes to Interstate 90 help (or at least don’t hurt) Cambridge transit; and councillors Tim Toomey and Craig Kelley are demanding a more or less immediate response (by Feb. 4) on a campaign finance order from last year. Televised.

Planning Board, 6:30 p.m. Tuesday. The board will talk about Alexandria Real Estate Equities’ Grand Junction Pathway Overlay District, with which the company hopes to build big on a lot at Binney and Fulkerson streets in Kendall Square in trade for a strip of land needed for a multi-use path through the city. Televised.

School Committee Curriculum and Achievement Subcommittee, 3 to 5 p.m. Tuesday. Discussion around creating a standardized way to get every district student transitioning from grade to grade with the necessary skills.

Subtract one Petsi Pies site and a Thalia club license, but add a Darwins, Little Crepe Cafe and Shy Bird?

License Commission, 3 p.m. Wednesday. There’s a lot happening, starting with the small, local Darwin’s Ltd. sandwich and coffee shop chain taking over the Petsi Pies space at 31 Putnam Ave., Riverside. There’s also finally action at the Oxford Spa, empty since July 2017 at 102 Oxford St., in the Agassiz neighborhood near Porter Square, with a new concept – it could become The Little Crepe Cafe. It sounds like Kendall Square is getting another fancy-sounding restaurant: Shy Bird, with indoor occupancy of 140 and another 30 on a seasonal patio served by Andrew Holden of Eastern Standard in Boston’s Kenmore Square. The Club Desportivo Faialense at 1121 Cambridge St., Wellington-Harrington, has drawn a hearing over an accused employee-on-patron assault and battery; and an unused license may be taken from the Thalia Theatre, 288A Green St., Central Square. Club management was a no-show Jan. 16, claiming illness.

The meeting is set for the cafeteria of the East Somerville Community School, 50 Cross St., Somerville.

Alexandria’s zoning returns before another body

Land, Water & Climate Change in Cambridge public meeting, 6:30 to 8:30 p.m. Wednesday. Discussion of new approaches to infrastructure and the realities of climate change keeping in mind development in watershed areas including Alewife, East Cambridge and throughout the Mystic River and Charles River watersheds. Bob Zimmerman, formerly of the Charles River Watershed Association, and Doug Brown, of the Fresh Pond Residents Alliance, lead the talk.

The meeting is set for the Cambridge Main Library, 449 Broadway, Mid-Cambridge.

Harvard Square Kiosk and Plaza Design Open House, 4 to 7 p.m. Thursday. Feedback from the community is wanted on design concepts for renovating the historic Harvard Square Kiosk, with attention to restoring architectural details, adapting for future use and redesigning the Plaza to improve accessibility and flexibility.

The open house is in the Isaacson Room on the second floor of Harvard University’s Smith Campus Center, 1350 Massachusetts Ave., Harvard Square.

Urban Forest Master Plan Task Force, 6 to 8 p.m. Thursday. Three days after the City Council looks at a moratorium on taking down trees citywide, the task force mulls changes to the law that defines “significant” trees and how tree-cutters will make up for removing them.

Board of Zoning Appeal, 7:30 to 11:30 p.m. Thursday. Among the board’s agenda items are thew creation of a 120-room StayBridge Suites hotel (with parking) on a 15,490-square-foot lot at 263 Monsignor O’Brien Highway, East Cambridge, overlapping the Somerville line and across from a Holiday Inn Express. There’s also a returning request for variances and special permits on the rebuild of a three-family home destroyed in the 2016 fire at 35-37 Berkshire St., also in East Cambridge.

This post was updated Jan. 28, 2019, to remove a canceled Saturday budget hearing to be held by the School Committee.