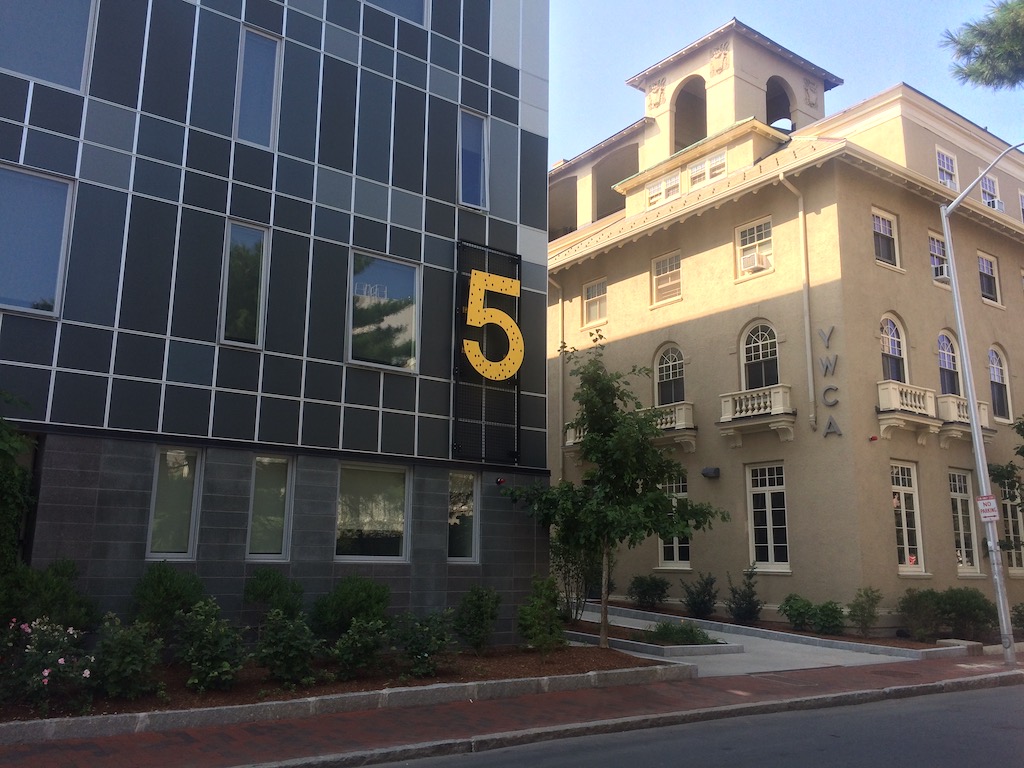 In promoting affordable housing overlay zoning, the city says a permit approved for the 40-unit Temple Place near Central Square was appealed, delaying the project for almost three years and forcing a redesign that reduced family-size units and lost two others. (Photo: Marc Levy)

The debate over a proposal to loosen zoning restrictions citywide for new housing that is 100 percent affordable has polarized the city deeply and sometimes led to personal attacks, even as both sides say they support more homes for low- and moderate-income residents.

One written comment on the proposal, submitted to the City Council’s Housing Committee, alleges without evidence that a New Yorker moved into a Cambridge public housing development and that a councillor’s aide got preferential treatment for his girlfriend who wanted an affordable apartment. A letter to the editor of a local newspaper says the author was “ambushed” and “verbally abused” by three supporters of the zoning proposal after testifying against it at a council hearing.

Douglas Brown, a prominent critic of the proposal, still bristled last month at Mayor Marc McGovern’s State of the City Address in December declaring that the current zoning code has created “gated communities” and “walls that concentrated inequality in some neighborhoods while sheltering wealth in others.”

“West Cambridge is not a gated community,” Brown said in an interview. He lives in the neighborhood and said most of the homes on his block are three-family. (West Cambridge has the lowest percentage of affordable housing of any neighborhood, according to the Community Development Department.) “We’re a bunch of people who care about the city, too. We’re a little skeptical about the city’s plans to solve everything” with the 100 percent affordable housing zoning overlay, Brown said.

Overlay zoning: What and how

The zoning proposal would allow developers who want to build projects that are totally affordable to low- and moderate-income tenants to escape some height, density and parking requirements as well as other mandates in the current zoning rules. Any Planning Board recommendations would be advisory, removing neighbors’ clout. The relaxed rules would apply citywide except in open space districts.

The proposal has been amended once by the Community Development Department after several public hearings and discussions among councillors. The council’s Housing Committee approved sending it to the full council on April 25, and councillors referred it to the Ordinance Committee and the Planning Board on Monday, the first step in adoption. It will almost certainly be changed again before final consideration. The council must act within 90 days or restart the process.

A very general summary of the arguments would look like this: Supporters say the overlay would help affordable housing developers get necessary approvals faster, thus cutting their costs and need for subsidies, and allowing them to better compete against market-rate builders for available housing sites. The overlay would also allow affordable housing to be built in neighborhoods that are now off-limits because multifamily buildings are not allowed or severely restricted. Opponents say the changes could lead to skyrocketing density, incongruous building heights, a flood of new residents, destruction of neighborhoods and possibly displacement of current lower-income residents while ignoring other important issues such as the need for middle-income housing and saving trees.

The debate has sharpened as each side tries to marshal supporters. Last month, Cambridge Housing Authority executive director Mike Johnston emailed about 5,000 people out of the 19,000 on the CHA waiting list for public housing or Section 8 rent assistance, urging them to voice support for the overlay and a $20 million city appropriation for affordable housing at a March 5 council meeting.

The message warned that “the opposition is mobilizing” against both measures. “If you truly want to obtain housing in Cambridge you must act now!” it said.

Opponents obtained a copy of the email and Brown denounced the description of the debate as a”battle” and opponents as “the opposition.” He also complained that the “city mailing list” that Johnston used should have been available to his side, too. Using such a list for “political purposes” was “completely inappropriate,” he said.

Responding, Johnston noted that the housing authority is not part of city government. He sent the message to the 5,000 waiting list applicants who live or work in Cambridge because they have priority for housing and would most benefit from more affordable units, he said.

“If we learn of something that would create more affordable housing and thereby help those on our list, why would we not reach out to our applicants and encourage them to speak up?” Johnston said. The overlay issue is not “political,” he said.

Low-income residents may be left out of city government discussions, sometimes because they don’t belong to neighborhood groups or live in places where people get fliers or mailings, Johnston said. Sometimes they are just overlooked; Johnston said a survey of neighbors about possible uses of the abandoned Vail Court site left out low-income tenants of two housing developments on neighboring Temple Street.

Despite the raging debate, political lineups seem unclear. Some longtime affordable housing boosters have questioned the overlay; one group that favors affordable housing but generally opposes higher density, the Cambridge Residents Alliance, has not taken a position.

A Better Cambridge, which promotes increased housing at all income levels, appears often on social media in support of the overlay. Although the organization reportedly represents for-profit developers, there are no obvious ties among the contributors to its political action committee. On the other hand, some of its officers have ties to Just-A-Start, one of the city’s two primary non-profit affordable housing agencies. An email message to ABC’s president, Jesse Kanson-Benanav, senior project director at the affordable housing developer B’nai B’rith Housing, wasn’t answered.

The heat of the argument has dismayed some participants. In two months of debate, “the vitriol in [City Council chambers] and on social media has come to a breaking point,” said Charles Franklin, a resident of The Port neighborhood, in a written comment to councillors on April 25.

“If we burn more bridges now, it will be harder to work together on other needed solutions in the future,” said Franklin, who is also a declared candidate for City Council.

After the dust settles, an overlay might produce relatively few additional units. The city now supports 50 to 60 new units a year; even with the zoning overlay, the number of apartments will depend on government funding, city officials say.

“In the context of the ongoing affordable housing emergency, I think we have an obligation to pursue this strategy, even though it infringes on the expectations of some residents,” state Rep. Mike Connolly wrote in an April 25 email to councillors, referring to the overlay. “I also think we should be honest about the limitations of this strategy. In my opinion, zoning regulations and appeals processes are not the main drivers of the housing emergency in Cambridge.”

Instead, Connolly listed “profound wealth and income inequity, an economic system that too often doesn’t work for working people, the continuing impacts of structural racism and racial oppression, and decades of austerity at the state and federal levels.”

To achieve enough housing for lower-income people, “we must also look beyond zoning to other areas such as progressive fiscal policy, strong tenant protections, comprehensive planning, community land trusts, the use of public land for affordable housing and many others,” he said.