State of the City address lays out work ahead, including on controversial housing proposals 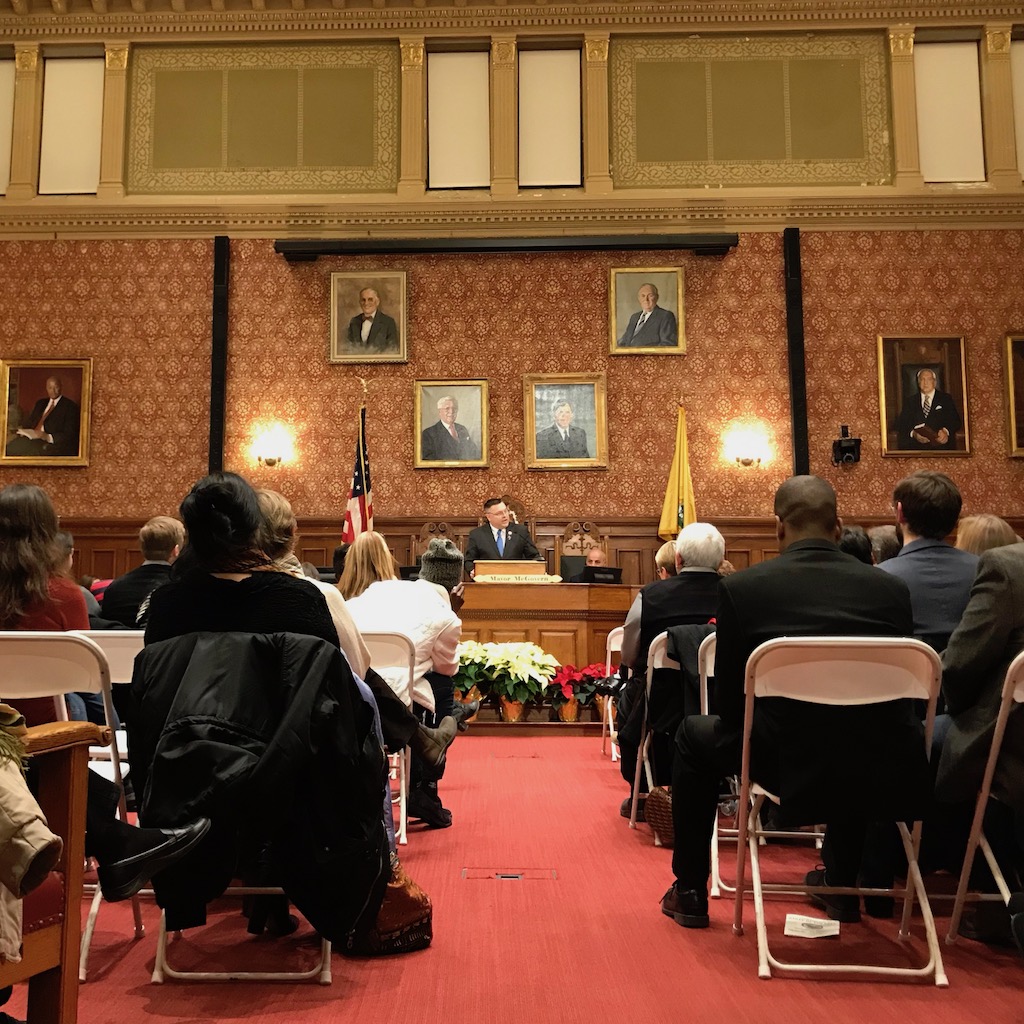 State of the City address lays out work ahead, including on controversial housing proposals

A map for change and even controversy was rolled out Wednesday by Mayor Marc McGovern during his State of the City address, including looking for tenant anti-displacement recommendations that will likely provoke landlords and a massive reworking of zoning with an affordable housing overlay found so divisive that some city councillors asked that it be downplayed so it wouldn’t taint the city’s full development master planning process.

The changes are necessary, McGovern said, because of residents who are not just being pushed out of the city, but even being made homeless and now living on the streets where they once had warmth, security and an address.

“As we move forward with debate over zoning … let us not forget that what we are really talking about is people,” McGovern said. “What we decide to do regarding incentivizing affordable housing development will directly impact who gets to live in our city and what kind of city we truly want to be.”

The creation of a blue-ribbon committee in January to address tenant protections and generate anti-displacement recommendations for the City Council to consider, to be led by councillor Sumbul Siddiqui, will be joined by work to update a nearly 60-year-old zoning code “to respond to the pressures that a global job market and spiraling rent prices are having on our residents,” McGovern said. “While we oppose walls and gated-communities elsewhere, our zoning code has created these communities here in Cambridge – walls that concentrate inequality in some neighborhoods while sheltering wealth in others, walls that are built not by a mason’s hand, but signed into ordinance by our own. Dismantling those walls, and the zoning plan on which they stand, is the work of restorative justice.”

Various tenant protections raised as ideas for exploration over the past few years have been blasted repeatedly by small landlords who believe they will lose income and value, get embroiled in court cases from tenants who abuse the rules and suffer as they did under rent control restrictions that were voted down in a statewide vote in 1994.

The overlay district had a near-toxic effect when publicized in September, leading to a council call to downplay a proposal that cast a shadow over the wide-ranging work of the Envision Cambridge master planning process; but McGovern said that when that process was complete, “I will call on us to take up the recommendations of the housing subcommittee for consideration and to pass the 100 percent affordable housing overlay.”

“If we are going to live the progressive values we say we have, then every neighborhood, every resident, must be willing to stand up and be part – must be willing to put aside their own interests to ensure that Cambridge is truly accessible to all,” he said. 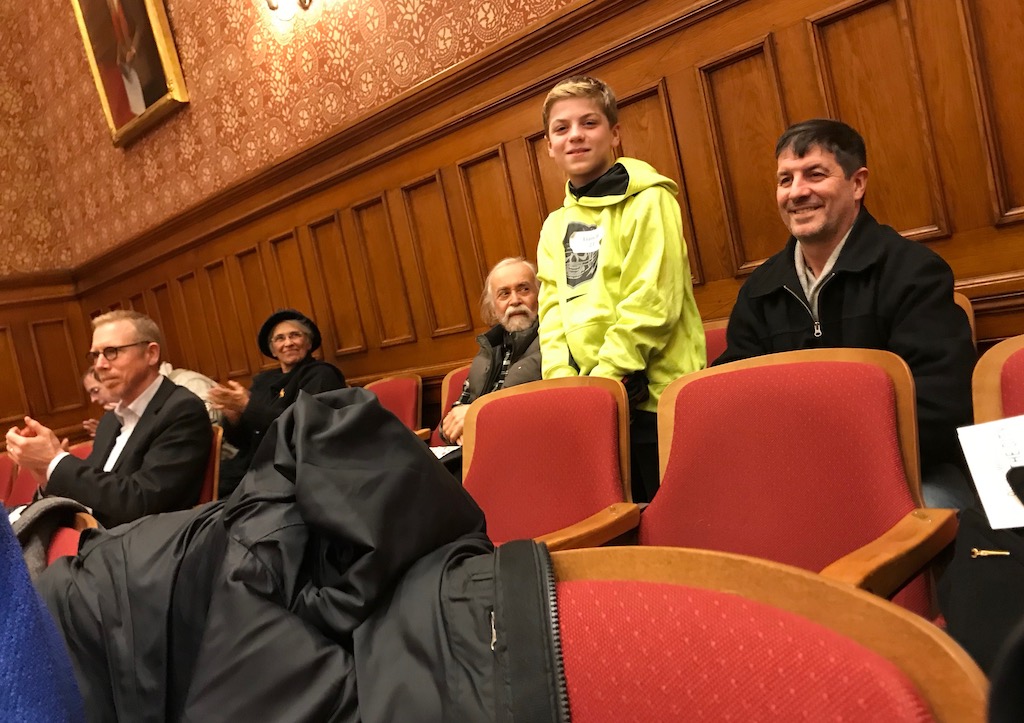 The homeless will get additional attention and funding so they can have necessary ID cards, and McGovern led applause for Liam Hannon, a 12-year-old called a “young wonder” by CNN for his work putting together Liam’s Lunches of Love, homemade meals he makes and delivers to the homeless with positive messages.

The city’s 500 homeless people are residents whose “needs for housing was not met soon enough,” McGovern said, comparing data that African-American households in Greater Boston have a median net worth of just $8 with the businesses and corporations around Kendall Square valued at a combined market estimate of $170 billion. He continued:

“It is hard to walk around Cambridge and not see the impact that opportunity gaps have in creating or widening disparities. Our city is home to some of our nation’s most influential citizens, and yet 500 of our most vulnerable sleep on our streets each night. Cambridge provides tremendous opportunities for the most highly educated who can expect an average annual wage of more than $150,000, while the median family income, however, is far lower … creating a gap that drives displacement and fuels inequality.”

His remarks were far more extensive, moving on from citing achievements such as opening Cambridge’s wintertime warming center for the homeless and opening the 1,000th unit of affordable housing from an inclusionary zoning program to launching discussions on race and class and distributing a quarter-million dollars in grants for the legal defense of low-income immigrants threatened with removal by federal actions. His work as leader of the School Committee was also addressed, including the creation of a savings program that would start to generate college money for students as young as kindergarteners.

The convening of an Opioid Working Group, work to prevent the deaths of pedestrians such as high school teacher Sam Bixler and Massachusetts Institute of Technology graduate Jie Zhao and bicyclists including Boston University grad student Meng Jin, creation of a surveillance policy and work on climate change also got recognition, along with dozens of other initiatives, in the mayor’s own 45-minute address.

City Manager Louis A. DePasquale, who spoke for around 40 minutes before McGovern, touched on many of the same issues, including work reflecting his understanding that “affordable housing is the top priority of the City Council.” He introduced his own coming initiatives, including recommending to the council that the city put 25 percent of building permit revenues toward affordable housing starting in the 2020 fiscal year, up from the 20 percent ($3.5 million, it turned out) he recommended for the 2018 fiscal year. He said he also plans to ask the council for $1 million for a new police cadet program that would give Cantabrigians between the ages of 18 and 23 training to become police officers in exchange for a two-year commitment bringing salary, benefits and vacation time.

The speeches took place in a packed Sullivan Chamber at City Hall, surrounded by city and state officials and other community leaders, as well as the speakers’ families and residents. The event included musical selections from the Cambridge Rindge and Latin School chorus and an opening reflection by the Rev. Adam Dyer, of First Parish Church.