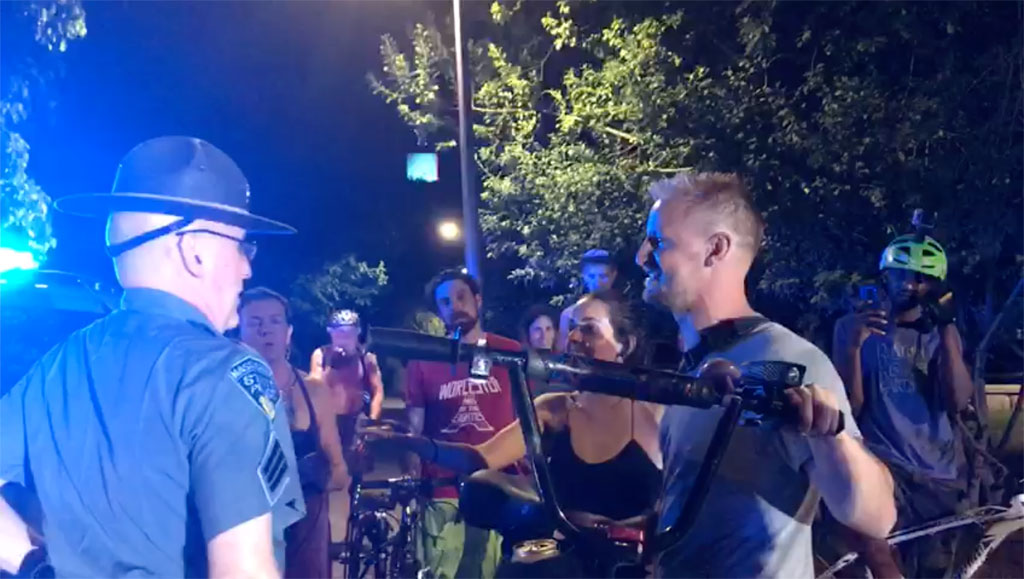 A state trooper talks with bicyclists after an arrest Saturday at North Point Park during an impromptu World Naked Bike Ride after-party. The image was taken from a video by rider Cheryl Browne.

The local celebration of the 10th annual World Naked Bike Ride ended on a sour note late Saturday in North Point Park, as up to 20 state trooper vehicles arrived to break up a post-ride hangout. Troopers arrested one person in a tense scene that included them pointing Tasers at the agitated riders who followed.

The nine-mile ride included some 205 participants who traveled in various states of undress through Jamaica Plain, Roxbury and the Seaport district, with organizers reporting a “very positive” reception. While an after-party was scheduled for Flat Top Johnny’s in Kendall Square, riders ended their two-hour trek at a previous years’ starting location for the ride, in North Point Park.

The ride reached the park at 9:40 p.m., one rider said, making for around an hour of peaceful relaxation, with some people still undressed, some people swimming and a couple of six-packs of beer being shared around. “It’s like a hippie thing going on,” said Cheryl Browne, a Cambridge resident who took part in the ride for a third year after 2016 and 2018.

“And then suddenly, it’s like a riot,” Browne said Sunday, recalling the arrival of state troopers.

State police have jurisdiction over the park, which is run by the state Department of Conservation and Recreation, so after Cambridge police got a call from a resident reporting “a group of approximately 30 people, all naked on the dock area of North Point Park,” they turned the issue over to state police with a call at 10:31 p.m., said Jack Albert, deputy superintendent of the Cambridge Police Department.

Troopers were dispatched at 10:40 p.m., said state police spokesman trooper James DeAngelis. At 10:59 p.m., the troopers sent out a radio request for assistance “for a large fight at North Point Park,” Albert said, and city police dispatched several Cambridge officers to assist at 11 p.m. – only to call them back three minutes later, when the troopers canceled the request.

From the state police point of view, the matter is simple: The park closes at dusk, and people aren’t allowed in afterward. Troopers asked the large group to leave and some did, DeAngelis said. That left “a second large group of 50 or 60 naked males and females” who were again asked to leave. (Browne recalled a much smaller number, many of them by that time dressed. A second participant, Carl Larson, also recalls a much smaller number – perhaps 25 people present when troopers arrived and perhaps only 15 after police called for people to leave.)

It was roughly reminiscent of last fall’s arrest by state troopers of two skaters using Cambridge’s Lynch Family Skatepark after dusk, after troopers arrived to kick out the roughly 40 people who were there. In that case, signs were updated quickly to say that skating was allowed at the DCR park until 9 p.m.

Michael Worrell, 37, of Dorchester, was arrested on charges of trespassing, resisting arrest and disorderly conduct. “Everyone could have been arrested just for being there at that time, never mind whatever else they were doing wrong, if they were nude in public and consuming alcohol in public and whatever else,” DeAngelis said.

Though DeAngelis referred to Worrell was being naked, a video of his arrest posted by rider C. James O’Brien on Facebook shows him wearing knee-length shorts.

Browne, who like other riders took video of the confrontation, said things escalated quickly, with “shouting and unnecessary name calling on all sides,” with tensions enflamed by the roughness with which Worrell was handcuffed and “dragged” away and with riders protesting near police, who responded by taking out their Tasers and aiming them toward rider faces, sparking in preparation for being fired. The large number of troopers and vehicles that showed up was another point of tension. On Brown’s video, which starts after the arrest, a rider can be heard commenting about the “20” vehicles, though Browne thought there may have been more.

“There were so many cop cars. How much backup do you need for naked people, who are obviously not armed,” Browne said. “These are not people who are fighting.” Last year’s event ended with riders gathered for a roughly two-hour party in Cambridge’s John F. Kennedy Memorial Park that went without incident. “It was just a bunch of naked people dancing,” Browne said.

DeAngelis did not have full accounts of the incident available readily and said state police “try to stay away” from debating the details of their enforcement.

Traditionally, police have accompanied the World Naked Bike Ride in Boston and kept riders safe as they would for any public event. But neither DeAngelis nor another trooper who spoke Sunday were familiar with the ride, and Browne wondered if their unfamiliarity caused some of the problem – seen especially as police insisted that one person cover their breasts but not another, without knowing the gender identity of either.

“This may be radical for cops, probably not so radical for the Cambridge community,” Browne said, recalling the trooper’s behavior. “There was just no understanding. It was like two completely different languages.”

This post was updated July 22, 2019, with information from the Cambridge police department and rider Carl Larson.