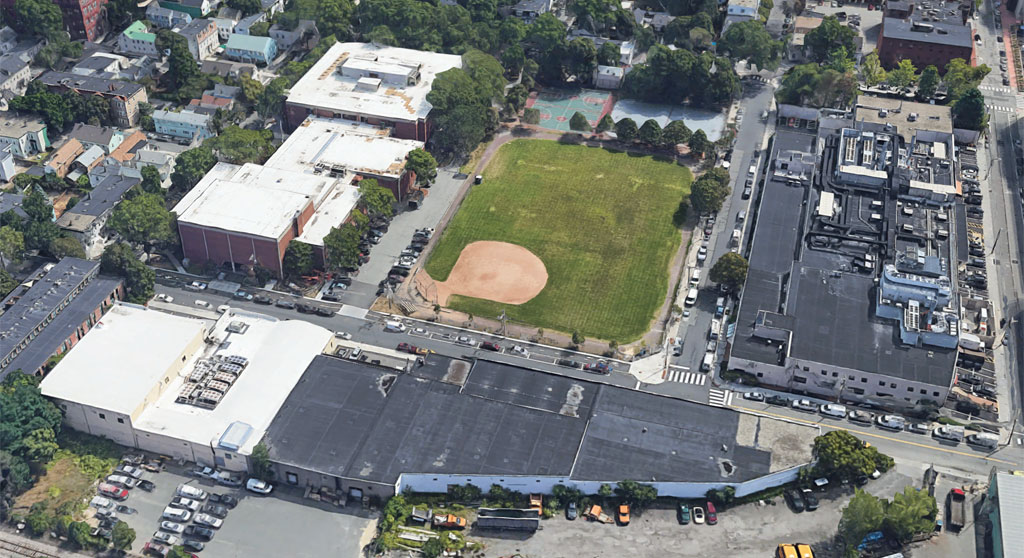 Eversource wants to build an electrical substation on the Fulkerson Street parcel seen at the bottom of this image – across the street from The Kennedy-Longfellow School in East Cambridge. (Photo: Google)

City Council at 5:30 p.m. at City Hall, 795 Massachusetts Ave., Central Square. Hold on to your butts – this is the agenda so big that its slow posting bumped the council’s sole summer meeting to Tuesday from Monday, so big that nine committee reports wouldn’t fit in the binders used for councillors’ printed-out versions, so big that councillor Alanna Mallon is proposing that the city save paper by dumping future hardcopies of “committee reports (which get referred) and … communications which we all receive in our emails.” In addition to those 800 pages of committee reports and an additional 63 communications from the public, there are 33 items from the City Manager’s Office; 25 policy orders from councillors; five items calendared from previous meetings; 11 applications and petitions; 29 resolutions; and three communications and reports from city officers. Some intriguing items include a call for the city to drop its five-year vendetta against the owners of the UpperWest bar (“an embarrassment that has gone on far too long,” in the words of councillor Jan Devereux, and “unacceptable” according to order writer Quinton Zondervan) and apologize publicly, and to find a way to get city officials aboard with the requirements of state Open Meeting Law. A request for a curb cut at the Volpe federal building redevelopment site in Kendall Square is back. And the city manager has several items of interest, including a report on a proposed elementary school-adjacent electrical substation of up to 80 feet and $130 million that Eversource has “determined [is] the only viable option”; explanation about cost overruns and controversial contractor selection in remaking Inman Square; and examination of some issues surrounding redevelopment of East Cambridge’s former Edward J. Sullivan Courthouse: As in a June 26 letter relating to the project, the city manager rejects alarms by residents, city councillors and council candidates that there’s any kind of threat from the decaying building. It “does not presently present a hazard that requires intervention,” according to acting fire chief Gerard E. Mahoney. Televised.

License Commission at 3 p.m. in the basement of the Michael J. Lombardi Building, 831 Massachusetts Ave., Mid-Cambridge near Central Square. There are disciplinary issues facing Benedetto, Commonwealth and the Martin Brothers Liquor Store in Wellington-Harrington; the short-lived En Boca may get a license taken away after non-use since June 2017; and a boutique hotel with food and entertainment takes a step forward in Lafayette Square, near Central Square.

Ordinance Committee from 3:30 to 5:30 p.m. Thursday. at City Hall, 795 Massachusetts Ave., Central Square. This committee run by city councillors Dennis Carlone and Craig Kelley will continue discussion on a proposed amendment to the zoning ordinance to create an affordable housing overlay district. Televised.