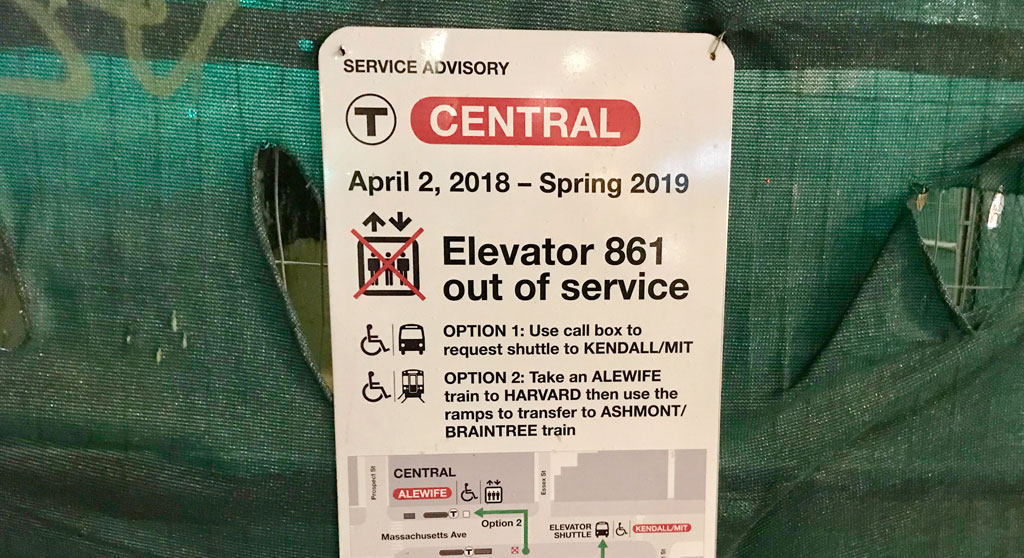 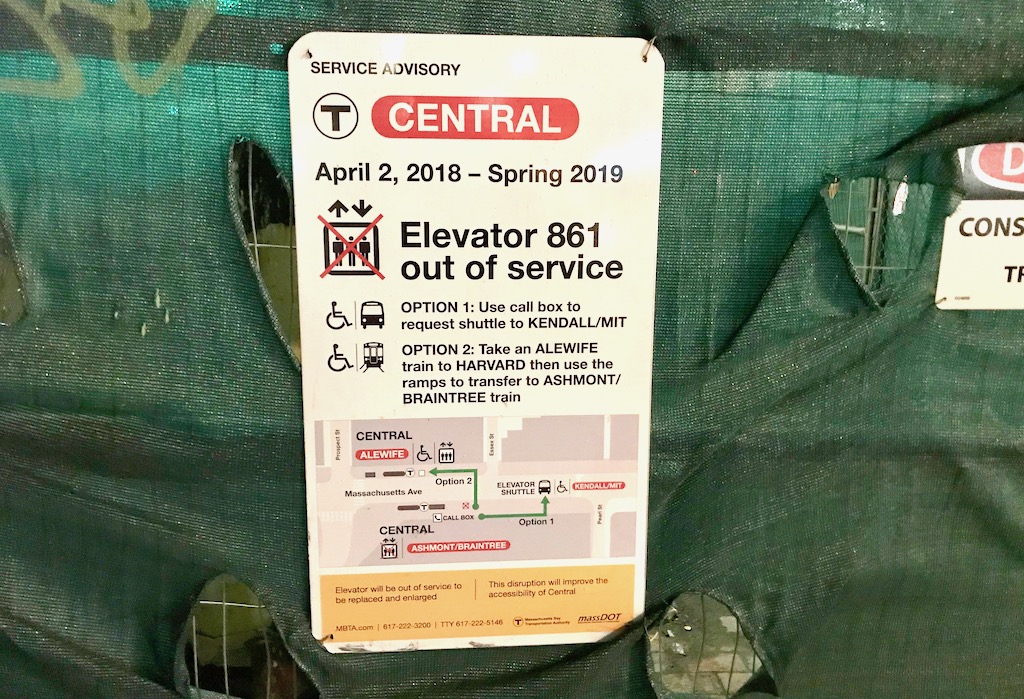 The elevator at the Central Square T stop remains out of service; there’s an elevator under construction in Harvard Square too. (Photo: Marc Levy)

City Council, 5:30 p.m. Monday. Despite inheriting items from the previous week’s seven-hour, 15-minute meeting, this agenda doesn’t look too scary. A proposal for self-storage zoning allowing a project with housing on New Street is back, drawing a Community Development Department response that is not enthusiastic about the zoning language, while some councillors are unenthusiastic about the project itself; city staff also don’t want idling vehicles added to what can be reported to the SeeClickFix program, or to quick-build separated bike lanes in Central Square on Massachusetts Avenue from Sidney Street to Putnam Avenue. Councillor orders include calls for the state to speed up repairs to MBTA elevators in Central and Harvard squares, and for the city manager to make right the abrupt cancellation of the 27th annual Cambridge Carnival. Outside of that, there remains an order for the city to apologize to the UpperWest bar for the wrongs done it through the License Commission and to make right a multiyear vendetta against its owners. A secondary order seeks a legal opinion on the commission’s powers with regard to liquor licenses. Televised.

Trees taken out of Inman Square could see new use

Neighborhood & Long Term Planning, Public Facilities, Arts & Celebration Committee, noon Tuesday. This committee run by city councillors Quinton Zondervan and Dennis Carlone will discuss what to do with some tree trunks – the remains of mature honey locust trees removed from Inman Square’s Vellucci Plaza to make way for construction reshaping its traffic patterns. The councillors want ideas on “possible future uses of the wood, which is a public resource.” Televised.

School Committee, 6 p.m. Tuesday. Concern over math at the Putnam Avenue Upper School has landed on the agenda, with member Patty Nolan noting that the school graduated only 22 students in the past seven years who successfully completed eighth-grade algebra, while the other upper schools reached average graduation levels five times that. There are also agenda items to add a ninth-grade unit on the health effects of vaping; and to explore suspension data among the youngest grades and attendance violation data among high schoolers, both from member Emily Dexter.

Planning Board, 6:30 p.m. Tuesday. Leggat McCall Properties won a state bid to redevelop East Cambridge’s 22-story former courthouse in December 2012, but a lawsuit and questions over fulfilling its special permit parking requirements has prevented construction – leading to extensions of a purchase and sale agreement with the state and, at this meeting, a request to the city to extend the special permit. (The board is likely to go along with it.) There are also agenda items for a Harvard Square pot store, called Charles River Remedies but selling recreational weed rather than medicinal marijuana, on Church Street in the former Starbucks at 31 Church St. Such businesses need a city law to be enacted first, but shop owners are raring to go. (Last week the board approved Yamba Harvest for the old Harvest coop grocery store site on Massachusetts Avenue in Central Square, making it the first special permit for retail cannabis granted in the city, then approved Western Front for recreational pot sales right across the street. But every permit is different.) Another item that’s a big deal: a City Council proposal to add review of demands put on city infrastructure by future projects’ electrical and gas needs. Growing power demand means the city faces being forced to host a new Eversource substation in a residential area across from an elementary school, and no one is happy about it.

Ordinance Committee, 11 a.m. Wednesday. This committee run by city councillors Dennis Carlone and Craig Kelley reconvenes its hearing on the Cannabis Business Permitting Ordinance – the law that will decide how recreational marijuana sales will work in Cambridge, and how those hurt the most by the nation’s misguided war on drugs will benefit now that the drug is legal statewide. Televised.

Parking disposition to be decided for courthouse

City Council reconvened special hearing, 3 p.m. Wednesday. Should the city lease out parking and retail space in the city-owned First Street Garage in East Cambridge? The five or so hours spent Sept. 9 on this was almost all public comment, with the public energized not just because 30 years is a long lease or because some find the city’s study justifying the lease to be dodgy, but because this enables the developer Leggat McCall Properties to act on its 2012 bid to redevelop the nearby 22-story former courthouse, empty and left to rot since June 2014. The project has divided the community. Note: Because this reconvenes a hearing that already took public comment, the council doesn’t intend to take more public comment now. Televised.