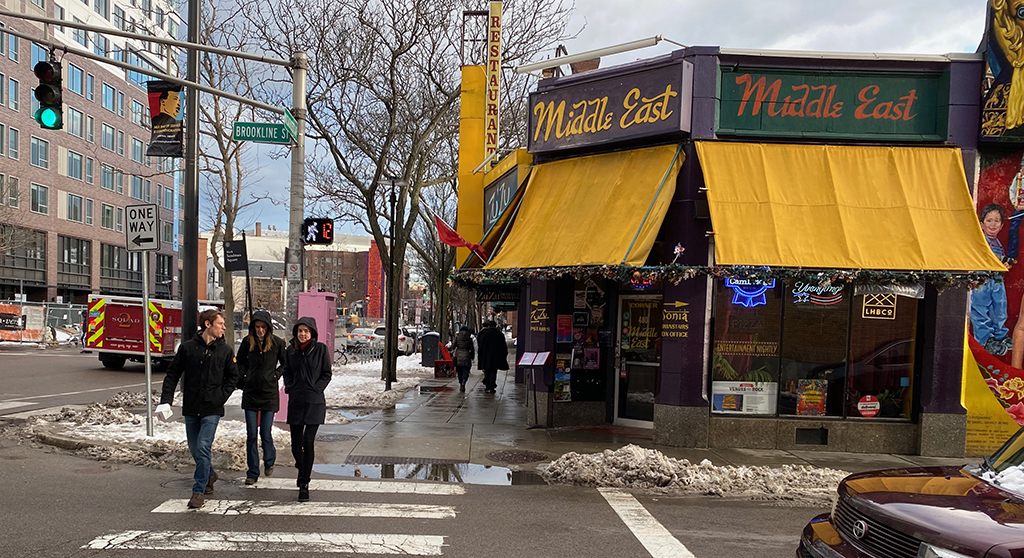 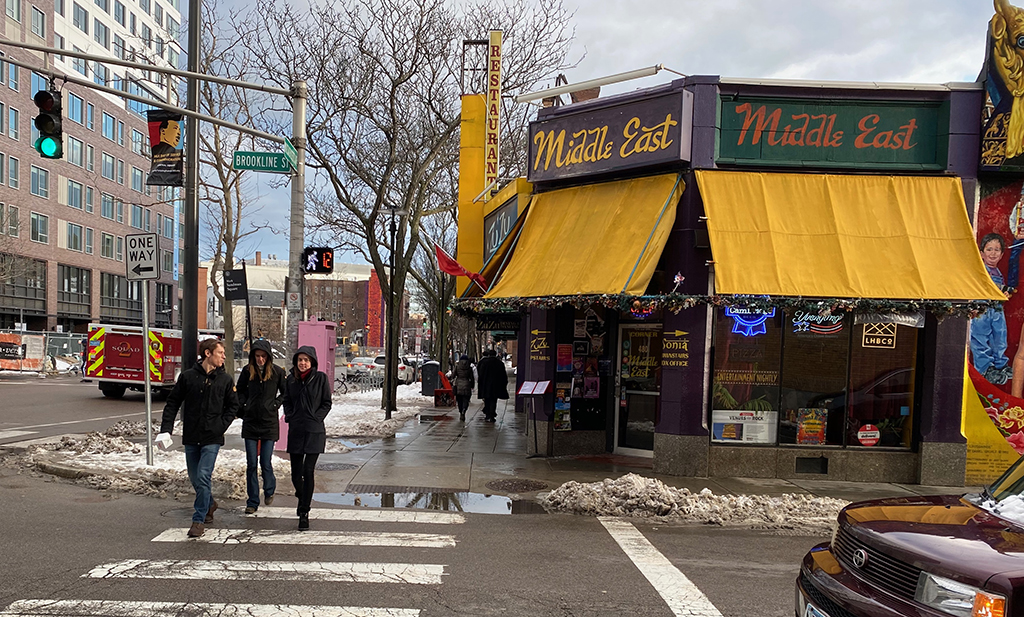 The Middle East and related property in Central Square is for sale, a co-owner said Sunday. (Photo: Marc Levy)

The Middle East nightclub complex in Central Square is listed for sale, co-owner Nabil Sater said Sunday, but he considered action on the listing to be far off or unlikely, and he said his ideal lease-back arrangement would allow the family-owned clubs to keep operating.

The Sater family bought the 23,388-square-foot property Dec. 2, 2014, for $7.1 million, seemingly ensuring the long-term life of its clubs – consisting of three stages at The Middle East and the ZuZu restaurant at 472-480 Massachusetts Ave.; and Sonia around the corner at 10 Brookline St. – but it’s been draining to pay off the high mortgage.

The listing was made with the broker Hunneman last week, Sater said. The price is reportedly $40 million. Hunneman commercial brokers said Thursday that information about the listing hasn’t been posted online, but has been sent to some 5,000 contacts. The information couldn’t be shared with a reporter unless a nondisclosure agreement was signed, a Hunneman broker said.

Though he spoke of keeping open the nightclubs that have formed much of the identity of Central Square for the past five decades, Sater was vague on how: A next owner paying anywhere upward of $7.1 million would likely demand leases of the Saters costing more than their current, already difficult mortgage payments.

But a statement from the Saters posted on Facebook late Thursday declared that not only would The Middle East remain running and open as usual during the sale process, but that “The Middle East business is here to stay and will be a part of any development at 472-480 Mass Ave.”

Losing the nightclub complex could be a big blow for Central Square, still state-designated as a cultural district despite the loss of several arts venues over the past several years and city-designated as a business improvement district as of last summer. The city designation is intended to provide the power and momentum to preserve what makes the square unique and even funky, despite pressures from inevitably soaring real estate prices.

But he supported the Saters’ listing of the property for sale. “After putting in decades of hard work, the Sater family has earned the right to get a return on their investment, and we support them wholeheartedly,” Monestime said, issuing a warning to a potential buyer:

“For anybody with thoughts of buying this important building where the plans do not include the rebuild of the three nightclubs that we are losing: I hope you’re up for a hard fight. For anyone to think this is going to become a lab space or anything like that, in our Cultural District we will fight you at every step.”

Sam Potrykus, director of the Brain Arts Organization, was among those in the community unhappy to hear of the proposed sale.

“The Middle East was one of the first places I experienced culture in Boston, so I hold that building close to my heart,” Potrykus said. “It’s painful to think that what it needs may not actually exist – someone of significant means that understands how essential the community is to the success and longevity of a business, especially a music club.”

He compared it to the loss of the EMF Building music community near Central Square, which was bought and is being turned into high-end office space, with the musicians and artists within evicted. “It’s another example of how … greed and myopia will most likely wash away invaluable creative space and those responsible will never understand or care what happened to our culture,” Potrykus said.

The Saters’ own mountainous mortgage took a big toll in 2015: When the Saters became the landlords of the nightclub T.T. the Bear’s Place, they said they were forced a raise rent by an additional $3,000 monthly. T.T.’s shut down in July 2015 after 42 years hosting live music, and the Saters replaced it with a rebuilt club called Sonia in March 2017.

A promise, then a step back

In August 2018, when it looked as though Club Bohemia was shutting down below the nearby Cantab Lounge, Middle East co-owner Joseph Sater, brother to Nabil, was asked about the longevity of his own music stages. He offered an assurance that the family establishments would be around so long as his generation lived, but could offer only hopes that the next generation of Saters would stay in the music business. “All that I know is that we’re not going anywhere. It’s our livelihood,” Joseph Sater said. “And hopefully the kids will carry the torch onward.” (The family also owns the Armory building in Somerville and The Firehouse in Allston.)

He scorned the generational turnover that is flipping properties and longtime businesses elsewhere in the city as heirs ratchet up rents, turn management over to impersonal companies or sell outright. “They just cash in,” he said. Especially for arts-related businesses, owners “have to do it for the love of it.”

But that month, Joseph Sater stepped away from management of The Middle East after a sexual assault allegation began affecting bookings at the club. “We can say, unequivocally, that the allegations being spread online are absolutely not true and that just being publicly accused is absolutely devastating,” the venue said in a statement given to WBZ. Joseph Sater’s retirement left the family short one hardworking employee, and while the complex’s stages are filled nightly, tensions have remained over the sexual assault allegations even years later, drawing resistance from some to performing or attending shows at Sater-run properties. Even the occasional national act takes a stand: Last August, Seattle rock band Thunderpussy moved its show to the Once Lounge + Ballroom in Somerville from The Middle East, pointedly making it a free benefit for survivors of sexual violence.

Angelle Wood, host and programmer of the “Boston Emissions” radio show, said she was “disappointed that it has come to this” for the Middle East and its history of supporting music and the community, but saw the sexual assault allegations as taking a toll after attempts by many to get to the bottom of the story ended in frustration.

“In terms of supporting a venue where you’re not sure if people are safe there … I have not gone to The Middle East since this information started to materialize,” Wood said. “You can’t have something like this be talked about and not addressed.”

The musician Edrie said her band, Walter Sickert & The Army of Broken Toys, chose not to play The Middle East until the situation was fixed – acknowledging that it’s already “a very tough environment to sustain any sort of music career, including being a venue.”

“I know that they have been thinking of selling for quite a while,” Edrie said. “I think this is a way for them to give that music venue back to the community so that people can now go there again.”

The Middle East began in 1969 as a restaurant featured belly-dancing and Middle Eastern music and one weeknight each dedicated to jazz and blues. That formula started to pall when political differences throughout the geographic Middle East raised tensions among patrons in Cambridge, Joseph Sater recalled, and the family turned increasingly to rock under the guidance of legendary promoter Billy Ruane, who died in 2010.

Upon hearing news of the proposed sale, Potrykus said: “Billy Ruane is rolling in his grave.”

Michael Monestime in the past called losing The Middle East unthinkable.

“The Middle East has become the heart and soul of Central Square. The Saters have run that corner at Brookline Street and Massachusetts Avenue like the living room of their home – where guests come in and feel welcome and invited,” Monestime said. “That’s such an important piece of Central Square. If it was ever at risk, I would be all in to make sure we retain it.”

The Saters’ first notion for securing the site financially came in 2013: adding four or five stories of condos over the clubs, built on trusses so the businesses could stay open during construction. Ultimately, the idea didn’t seem workable, and the Saters abandoned it.

Diego Marcano contributed to this report, which was updated Jan. 24, 2020, with comments from Michael Monestime, Anngelle Wood, Edrie and the Sater family.