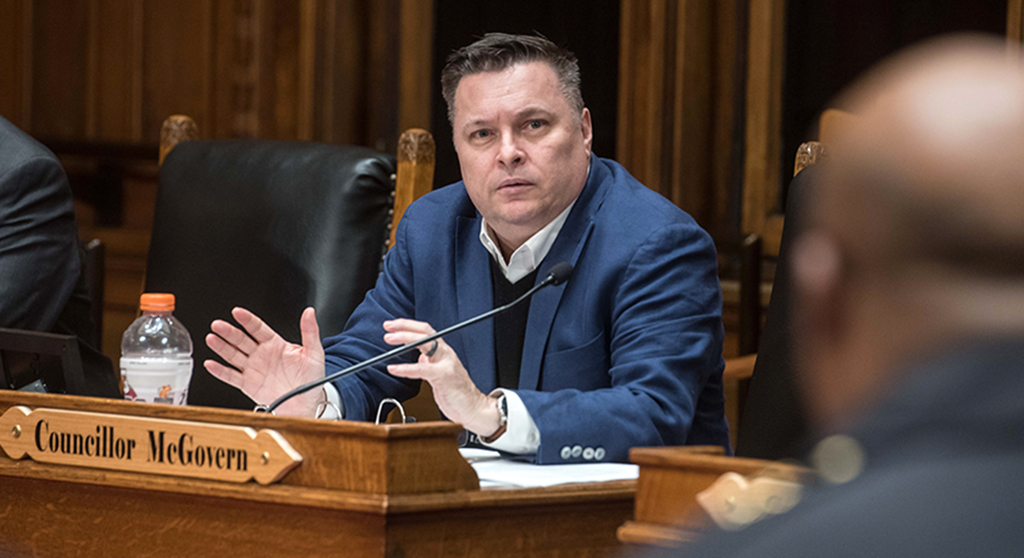 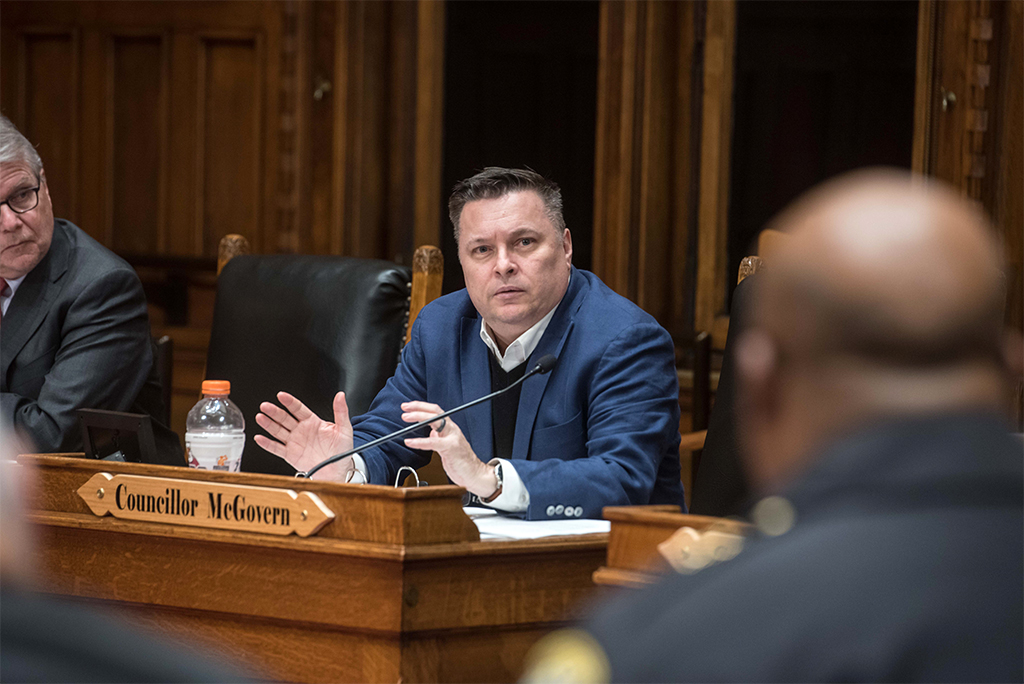 The affordable housing zoning overlay tabled in September after a year of controversy and divisiveness returned to the City Council on Monday, heading off to committee after drawing familiar-sounding public comments pro and con and some foreshadowing of councillor debate.

It will be scheduled for an Ordinance Committee hearing as soon as possible, likely being heard in less than a month, said committee co-chair Dennis Carlone, who promised to report a date at next Monday’s council meeting.

“I think maybe councillor Carlone is still having PTSD about the 2,700 hours we spent in the Ordinance Committee talking about this,” joked councillor Marc McGovern, the other committee co-chair, after reintroducing the overlay.

The zoning is intended to eliminate design limits and development hurdles for developers putting up buildings of 100 percent affordable housing, including in parts of the city dominated by single-family homes and lacking in affordable housing. But questions on its effectiveness and approach – and, conversely, whether those opposing it were being racist, classist or just selfish – led to the certainty last year it would not get enough votes to pass. The start of a council term in January doesn’t mean just a fresh look, but a changed council that many believe now has the six of nine votes needed for a zoning overlay to become law; in the past term, only five councillors had been willing to vote it in.

That was after were more than 20 community meetings overall, including nine Housing Committee hearings, with 62 amendments proposed and 46 of them passed into the zoning to be considered, McGovern said.

He said all of those amendments are in the document councillors agreed to send on to the Ordinance Committee and Planning Board – following procedure for citizen zoning petitions, although this is a council proposal – but the “clean version” he made was perhaps an omen of the complicated conversations to come. Even after McGovern said he believed the document held only the existing, approved amendments, councillor Quinton Zondervan made a request showing caution, if not wariness: that a “red-line version [of any new changes] would be helpful.” A letter from resident Stephen Kaiser also urged a version formatted like the ones by city staff, since McGovern’s version didn’t show changes from the Aug. 29 version or, for that matter, a date or page numbers.

McGovern agreed to reformat the document as needed to show any changes since the final round of amendments last year, staying focused on moving the document forward in the process. “We heard from a few folks tonight, and even those who continue to have concerns about the overlay all said that they want more discussion. This is how we get more discussion, is we go to the Ordinance Committee,” McGovern said.

Some 20 speakers during the public comment part of the meeting addressed the overlay, including representatives from each of the city’s nonprofit developers of affordable housing that might benefit most directly. Rebecca Schofield of Homeowners Rehab Inc. – who noted that she herself was priced out of Cambridge a couple of years ago – called it an “essential tool for building more affordable housing” that was ready “as currently proposed.” A counterpart at Just-A-Start, Lauren Curry, agreed it was “ready for enactment, and desperately needed” considering the thousands of applications received recently for a building of only 98 affordable units.

There were still skeptics among the speakers, though, who pointed to the need for traffic studies before approvals, questioned if open space requirements were adequate or reminded that for all the energy it was taking, the zoning promised almost nothing in terms of producing units – including for Cantabrigians, since the state is pressuring the city to deemphasize housing priority for people who live or work in Cambridge. There were “valid sticking points” to the overlay, and the huge number of amendments last term “showed how much work it needed. And you know, you can’t put the genie back in the bottle with bad legislation,” resident Marilee Meyer said. “Legislative surgery is needed, not this heavy-handed approach.”

“Let’s look for collaboration, not just a total win at any cost,” Meyer said. “Above all, let’s hope civility rules.”

In other affordable housing action Monday, the council passed to a second reading an interim update to the city’s “incentive zoning” that sets a per-square-foot “linkage fee” for big non-residential construction. Intended to make up for resident displacement caused by bringing in new, likely high-earning residents, the fee was recommended to rise to $19.10 from the current $17.10. But at a Feb. 12 meeting of the Ordinance Committee, first-term councillor Patty Nolan proposed going up to $20.10, drawing approval of the members.

“When the rate was raised just a few years ago, it clearly didn’t have one iota of impact on the amount of development that happened in the city,” Nolan said during the committee hearing. “The sooner that we can get to a greater amount of linkage fees, the better.”