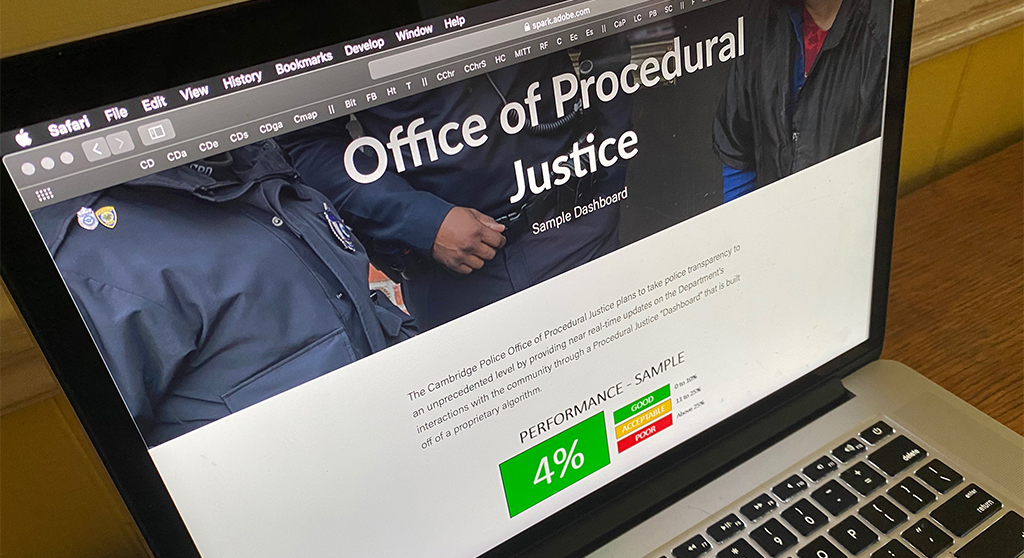 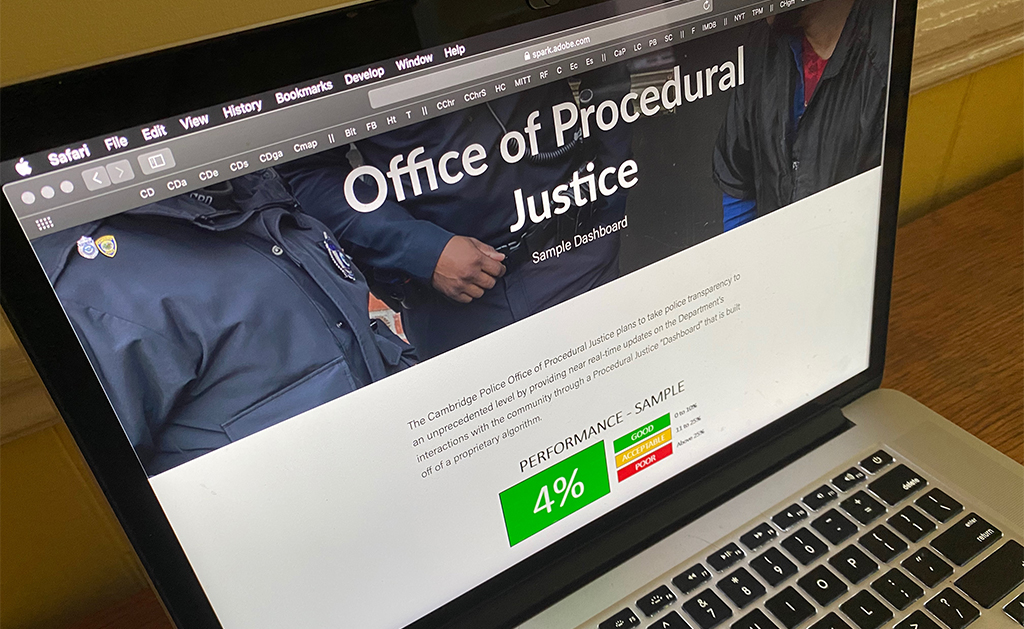 People looking forward to the arrival of the Cambridge Police Department’s online Procedural Justice Dashboard, which is supposed to bring transparency to the department’s treatment of different racial and ethnic groups, may have a longer wait than they expected. It’s not clear whether the dashboard will include information on police stops by race and other basic data used to investigate racial profiling, at least not at first.

On Thursday, police spokesman Jeremy Warnick said the dashboard initially “may not be as robust as we had intended” because of hiring and financial delays as well as the planned diversion of funds from the department to housing and social goals. He previously said it’s too early to discuss details of the plan because it’s still being developed.

The department’s Office of Procedural Justice was created in 2018 with a mission of “proactively monitoring data relating to police-citizen interactions for indications of possible racial profiling, racially biased policing or use of force incidents, as well as assessing the department’s compliance with statutes, ordinances and regulations aimed at mandating accountability,” a description in the 2018-2019 city budget said. And the public would know how police performed in these areas through a public “dashboard.”

As the department’s website now says: “The Procedural Justice ‘Dashboard’ takes police transparency to an unprecedented level by providing near real-time updates as to differences in how the department treats the public.”

Yet so far there is nothing but a “sample” dashboard that does not include any examples of data. Instead, there is a hypothetical score: a number that compares perfect performance – equal treatment of white and nonwhite citizens – to Cambridge performance. How is performance measured? Through a “proprietary algorithm,” meaning the method is not public.

Warnick said last month that “it’s too premature to delve into the dashboard at this time,” as things could change as it’s developed. The sample “is only intended to give residents a sense of what type of information could be available,” he said; detailed plans aren’t available.

Five months for a response

Police commissioner Branville G. Bard Jr. gave some additional details in March, responding to a City Council request for updated information on the “progress” of the dashboard. (That request was made to the city manager in November.) Bard said that initially the Office of Procedural Justice will examine information on traffic stops; later, data on pedestrian stops and use-of-force incidents.

“The information used is protective of the public and fair to the men and women who enforce the law,” Bard’s response said. “Once calculated,” it will be posted in “(near) real time” on the dashboard.

Councillors did not question Bard about details of the dashboard at the March 2 meeting. They were more interested in the schedule. Bard said the office had decided recently that it needs to radically change how it collects data to automate the process and allow the public to “interact” with the information, presumably choosing how to make their own comparisons.

No request for funding

An unnamed “local company” volunteered to help automate data collection, and ultimately the department decided to buy new software, Bard said. As a result, the department must remake its data reporting and collection systems, he said. It could take six to nine months.

Bard said a request for money to buy the software was “imminent” and he hoped to have the system up and running by the first half of this year and the dashboard available to the public “shortly thereafter.”

Four months later there has been no request for money. Warnick said Thursday the earliest date for a submittal would be late this month. One of the two positions in the Office of Procedural Justice, an informatics analyst, was not filled as of March and remains vacant, Warnick said Thursday.

“However, with the recent developments in reallocating funds from the Cambridge Police Department toward other city initiatives, both of these matters may be delayed,” he said. At last report, City Manager Louis A. DePasquale had planned to redirect $2.5 million from the police budget toward housing, social work, education and the Human Rights Commission by freezing vacant police department jobs.

Separately, councillors at a Wednesday meeting of the City Council’s public safety committee pushed for more disclosure of complaints and disciplinary action against officers. “I think people would want to see that we are taking those complaints seriously, and that if someone is found guilty of that complaint that they are held accountable, and I don’t know if that information is public,” councillor Marc McGovern said.

Bard said information on complaints against police is “readily available,” but in line with the city’s interpretation of state law, discipline is not public. In May, city solicitor Nancy Glowa told councillors they could not find out, even in a closed-door session, what happened to Police Superintendent Jack Albert after Albert accidentally used the department’s Twitter account to call U.S. Rep. Joseph Kennedy III “another fucking liberal jerk.” And although the information on the number and year of complaints is public, getting details requires filing a public records request; Cambridge Day has submitted a request for the specifics, including racial information, of the eight complaints that have been made since 2016.

One of the eight was substantiated and one, made this year, is still under investigation, Warnick said. In the others, police officers’ actions were upheld.

Bard said at the committee meeting the department uses software to identify officers with multiple complaints or use of force incidents. He didn’t say how many incidents would trigger action, but spokesman Warnick said those with at least three cases and possibly fewer were selected.

“Intervention includes counseling, retraining and psychological evaluation if warranted,” he said. “It is intended to serve as a tool to help supervisors and commanding officers determine if job stress or performance problems exist.”

The number of use-of-force incidents has declined in recent years; there were 59 in 2018, the most recent year for which there is an annual report. One officer had seven incidents in 2018, including three where he pointed a gun at a suspect, according to the department’s annual report. The department found force was justified in all 59 cases in that year, and in 2015 and 2016. There was no report in 2017 because of staff turnover.

At the committee meeting, vice mayor Alanna Mallon said not enough people realize they can file a complaint about police with the Police Review & Advisory Board, a panel of civilians that can hold hearings on complaints. Mallon apparently did not know that the board can do no more than make recommendations to the city manager on police discipline and does not even investigate its own cases; police investigate first and the board, which sits with police officers as de facto members, acts if it disagrees with a finding.

The board has substantiated or partially substantiated four complaints since 2016. One resulted in a recommendation, according to a Dec. 19, 2017, letter from PRAB to deputy superintendent Paul Ames, then head of the Professional Standards Unit, which investigates complaints. The name of the police officer was blacked out in the copy obtained by Cambridge Day with a public records request.

The board said the officer had violated a department rule forbidding “discourtesy, rudeness or insolence to any member of the public” when the officer “indicated a complainant should ‘stay off’ the Tinder website.” Tinder is an online dating app with a reputation for facilitating casual sex.

The letter didn’t give details of the complaint; its language suggested that the complaint involved sexual harassment or assault and that the complainant was a woman. “Given the context and sensitivity of this case – and the larger dialogue about sexual assault, gender issues and respecting women’s rights in the current moment – we believe this officer was not sufficiently sensitive and respectful,” the letter said.

It went on to praise the police department for “quickly introducing mandatory trauma-based policing training for officers that investigate sexual assault,” but added: “More broadly, we urge the department to take this opportunity to reflect on how this incident can inform ongoing improvements in training, policy and procedures.”