Councillors return to City Hall for budget votes, one voice in dissent on police and school items 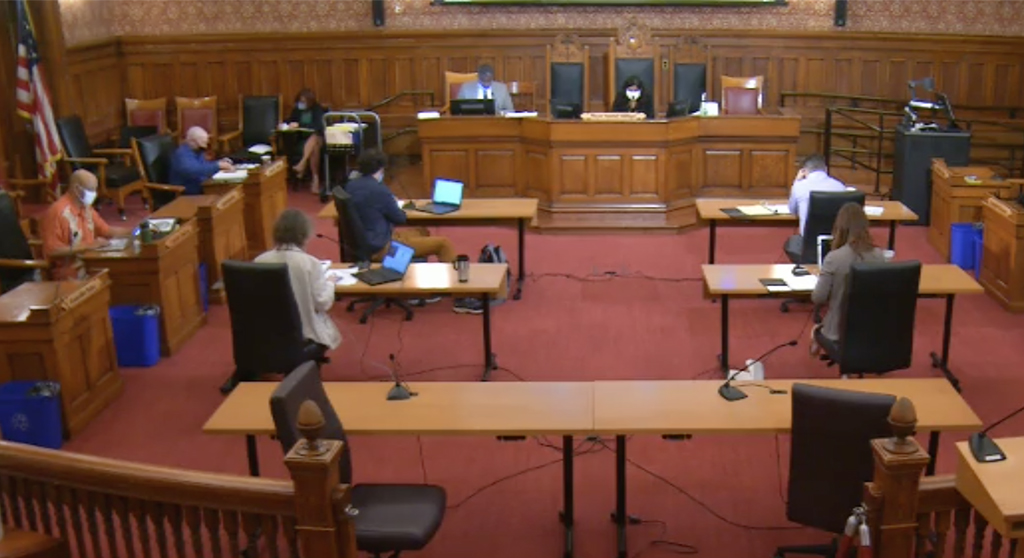 Councillors return to City Hall for budget votes, one voice in dissent on police and school items

City budget appropriations of more than $1 billion were approved Monday by the City Council in a series of votes that included impassioned discussion of police department funding – a return of the topic that dominated last week’s council meetings – and questions about a $250 million school project.

In a change from meetings since March, most of the council was together again in Sullivan Chamber at City Hall rather than calling in from home. Social distancing to avoid spread of the coronavirus was achieved by alternating councillors at the desks around the sides of the chamber and putting others in new, forward-facing desks in the middle of the room. It put councillors mostly face to face for some contentious topics.

But what seemed to spark the most violent differences of opinion a week ago took a largely benign form Monday, with the question of “defunding” the police department by $4.1 million now sparing police projects seen as in line with community and council wishes – such as programs aimed at getting more locals patrolling their own city – and finding $2.5 million to redirect by freezing police department vacancies.

The positions were once to be delayed while the city assessed the impact of the Covid-19 crisis, budgeted for only three months for fiscal year 2021, which begins July 1. Now they will be filled instead of police vacancies.

“I’m thankful that councillor [Jivan] Sobrinho-Wheeler and the mayor and others came together within the past few days to work on the policy order and arrived at what I think is a workable compromise,” councillor E. Denise Simmons said.

Sobrinho-Wheeler and councillor Quinton Zondervan brought forward the defunding proposal last week, reflecting the spirit and goals of the Black Lives Matter protests raging around the latest rounds of killing of people of color by police or under other suspicious circumstances. It sparked hours of public comment, mainly in support, and denunciation from police commissioner Branville G. Bard Jr. Simmons had also spoken at length about it in anger, though her final verdict was that “I certainly agree with the overall intent” – and on Monday she got credit for working with Sobrinho-Wheeler on the amended version; Zondervan seemed all but forgotten in the discussion until councillor Dennis Carlone reminded the room of his involvement. “I’m also part of this collaboration,” Zondervan said, after thanking Carlone.

Zondervan added an amendment to clarify that no cuts to the police budget would jeopardize the hiring of Cambridge community members as patrol officers or “otherwise reduce the diversity of the police force” – which led to debate as vice mayor Alanna Mallon sought to avoid the term and substitute “police department.” Zondervan pushed back, clarifying that he meant specifically officers on patrol, but Mallon’s term won out in an 8-1 vote, with Zondervan the holdout.

It would mean cuts in services and staff, because some of the rise in budget from one fiscal year to the next are contractual obligations such as cost-of-living salary increases, budget guru David Kale explained. City Manager Louis A. DePasquale simply complained that Zondervan’s proposal “takes the order that we worked on all weekend and just really places it back to where we were.”

The motion failed 7-1-1, with Zondervan in favor and Sobrinho-Wheeler voting “present.” Councillor Patty Nolan said she was not in a position to undo the $2.5 million redirection of funds, but like Zondervan was willing to start work “tomorrow” on systemic changes to Cambridge as a city and any racism built in to its governing structures.

The other sticking point was over the the $250 million Tobin Montessori and Vassal Lane Upper Schools overhaul, $237 million of which was before the council Monday.

“Spending $237 million to rebuild a school right now, in these uncertain times, doesn’t make sense to me. I think we can wait a year and see how the economy develops and how our approach to education evolves based on not just the pandemic, but our growing recognition of how pervasive racism is in our system of government and education,” Zondervan said. He proposed delaying the project by a year.

Nolan again was sympathetic to the somewhat staggering expense of the proposed construction – being fresh from the School Committee before her November election to the council, she said she knew of similar projects done for less money. But while Carlone wondered if a recession wouldn’t lower construction and material costs, DePasquale’s message won out: “If there is a delay, and it could be because of Covid-19, the number’s going to grow. So we can make the number lower, but realistically, we’ll be coming back for another appropriation,” he said. “This is an incredibly expensive project, let’s not kid ourselves … I’m really working hard to make sure it’s not over $250 million.”

The price was solid even cutting the number of preschool classrooms on the campus to four from eight, DePasquale said.

The council ultimately approved a series of budget items that would make most other cities gasp, from a relatively minor water budget of $13 million and investment fund of $37 million to a general fund budget of $675 million – including an Information Technology budget that had been rejected in committee on its own but now was approved in the whole – and appropriation orders of $702 million. (DePasquale made the Information Technology budget more palatable by acceding to a councillors’ rebellion, agreeing to a feasibility study of a city-owned broadband network after long resistance.) On the general fund budget, Zondervan was again the holdout in an 8-1 vote, explaining an essentially symbolic vote that was a lonelier repeat of his no vote the previous year: “It’s not just the police department budget that’s racist. It’s the entire city budget that needs to be reconsidered and reallocated to address institutional racism.”

In May, before the city manager acquiesced on a broadband study, it looked like he would be joined by Sobrinho-Wheeler.