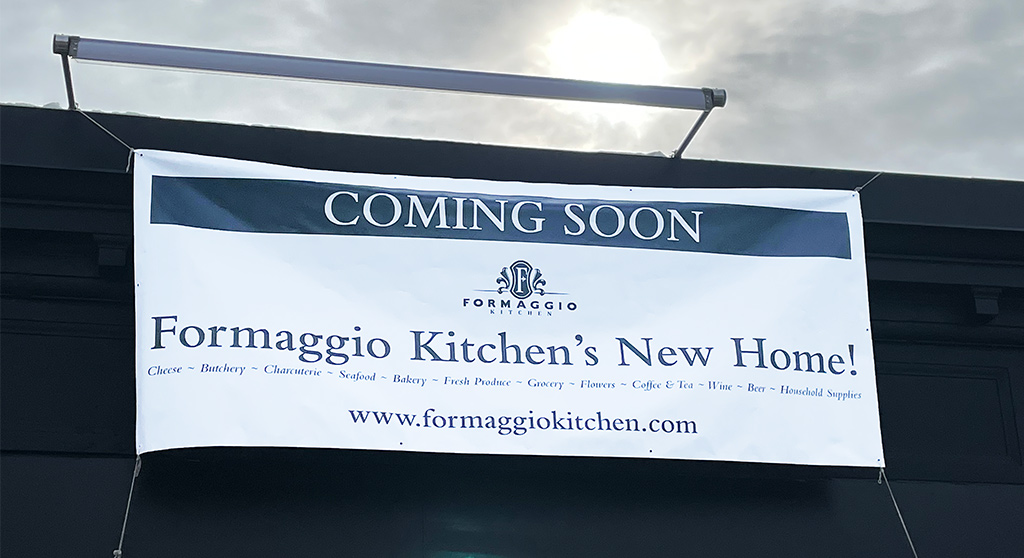 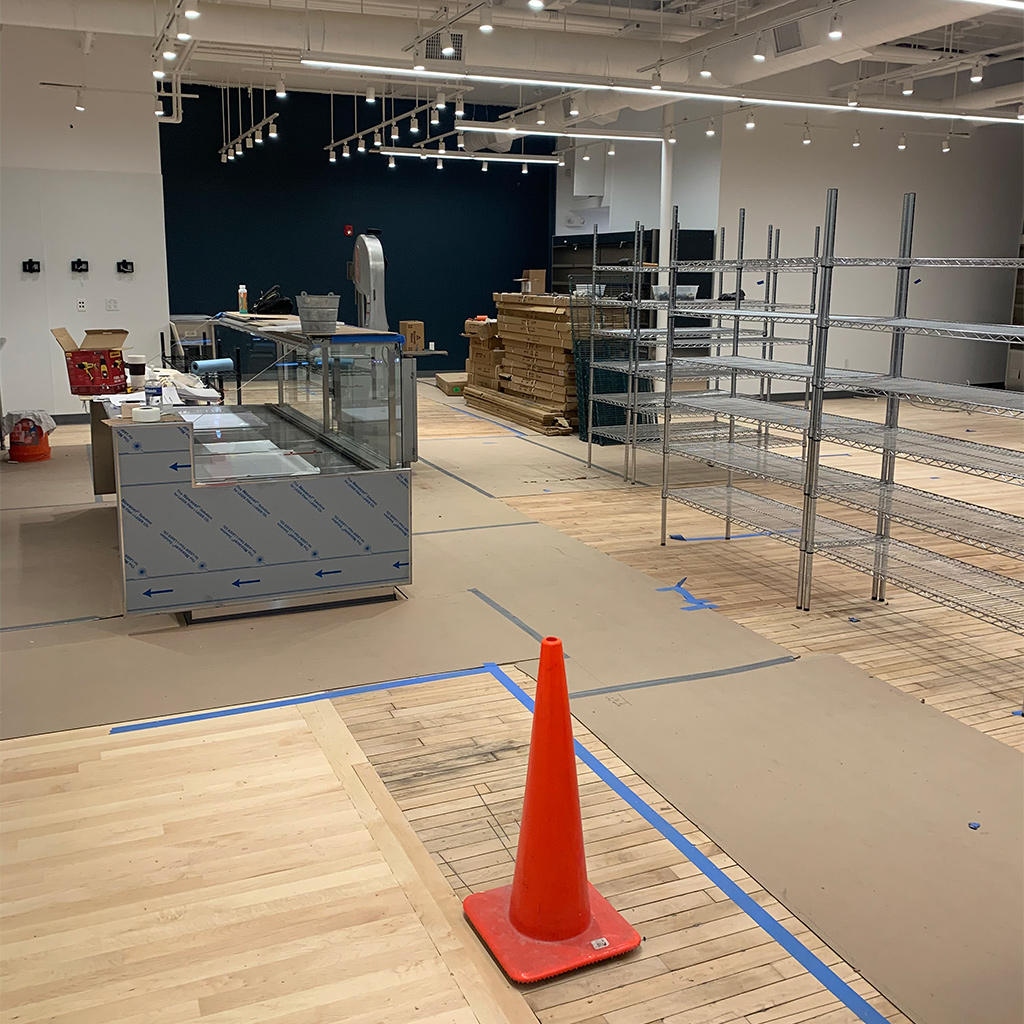 Formaggio Kitchen announced last week that it would close down its original store at 244 Huron Ave. and relocate fully to the old Fresh Pond Market locale at 358 Huron Ave., though when rescuing the closing grocery store in 2019 owners said they planned to keep both businesses.

“Incredibly disappointed,” one poster wrote on the site Nextdoor, saying Huron Village residents expected Formaggio to run the market as it had been, as well as keeping its specialty offerings and famous cheese cave where they’ve been since 1978.

While that was the intent, the coronavirus pandemic, economic challenges and other unforeseen factors – most having to do with the reconstruction of the circa 1922 market – have forced a change, Formaggio co-owner Ihsan Gurdal said Tuesday.

A sign on the new Formaggio location shows the same product categories as at the original location up the road. (Photo: Tom Meek)

“When we tore down the walls we found structural problems. The fire department had us put in a sprinkler system. And then when Covid hit, the city shut down construction for five months – and then after, it was really hard to get people to come back,” Gurdal says. Fresh Pond Market was initially expected to reopen last spring. Now the goal for opening is March 1.

Even in the fall of 2019, the Gurdals were finding that renovation of the 6,000-square-foot space needed a gut rehab costing “more than we wanted” – that even “scared” the couple to think about. The property was listed in the millions of dollars; in addition to rehab costs, the pandemic meant months of paying rent with no progress on the work.

After 42 years, it will be a bittersweet departure from 244 Huron Ave., Gurdal said. From that address he and his wife and co-owner, Valerie, have launched three other Formaggio locations, one in the South End, one in New York City and the last where Edible Arrangements was on Hampshire Street, just outside Kendall Square. Cognizant of the neighborhood’s expectations, the owners say they look to have a blend of classic specialty food shop that has become the mini-empire’s signature, as well as the bodega-plus offerings Fresh Pond Market brought to the area for nearly 100 years. “We’ll sell dishwasher liquid, Band-Aids and other essentials,” Ihsan Gurdal says. “We’re going to listen to neighbors and their desires. We’ve been having conversation with those who provided to Fresh Pond Market.”

The Najarian brothers held off selling their family-owned market until they were satisfied they’d found the right buyer, an independent owner who would keep it a market as neighbors were used to, including a full-service butchery. 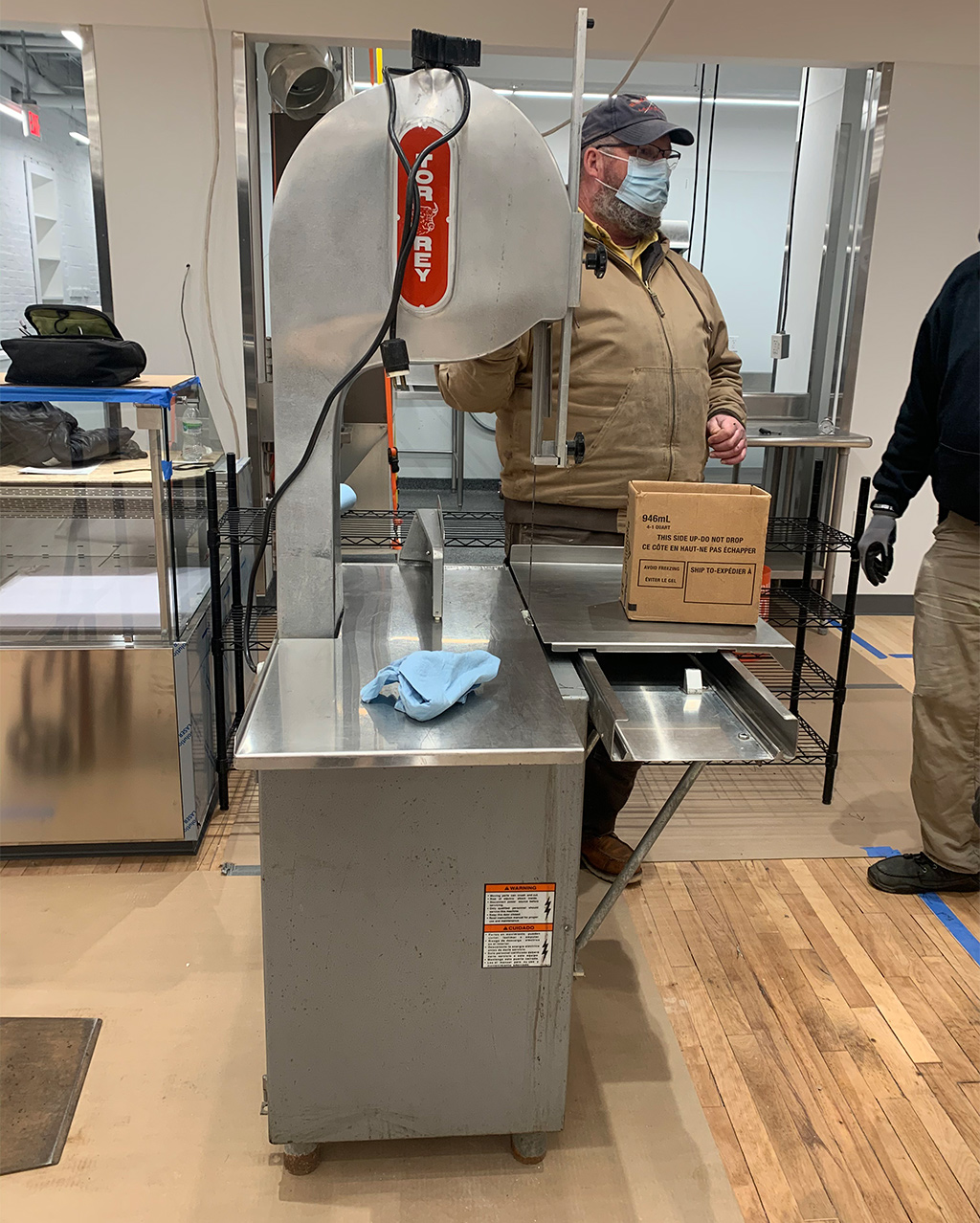 Butchery gear is ready for eventual use at the new Formaggio location. (Photo: Formaggio)

“The new place is twice as big as our current place,” he noted. “In the old place we were all on top of each other – the butcher shop staff, the bakers and then there was catering.”

That world-renowned Formaggio cheese caves also will move down the street. The subterranean expanse – a series of multi-climate chambers accommodating the environmental needs of varying European varieties – will be bigger and perhaps allow Formaggio to age its cheese organically, keeping it longer and providing customers with new and even more nuanced offerings. Customers should expect to find $10 to $15 organic wines and not just higher-end labels that have been standard at Formaggio, though not more commercial and lower-quality brands such as a Yellow Tail. “Balance” is how Gurdal describes the undertaking. “We’ll flex and bend and go with what works.”

As to the location he’s leaving behind, Ihsan Gurdal hoped it might become something that would enliven the neighborhood, such as a restaurant or flower shop.