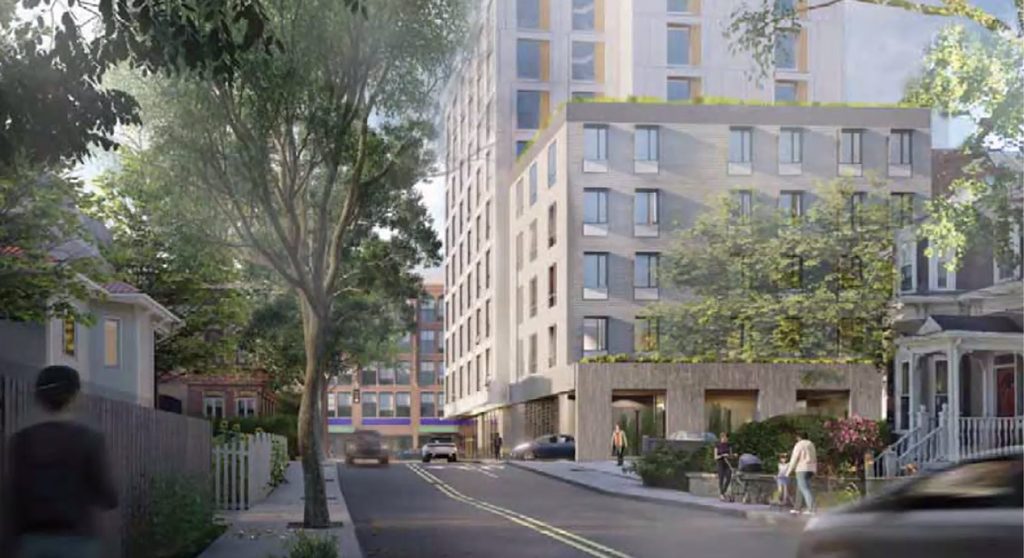 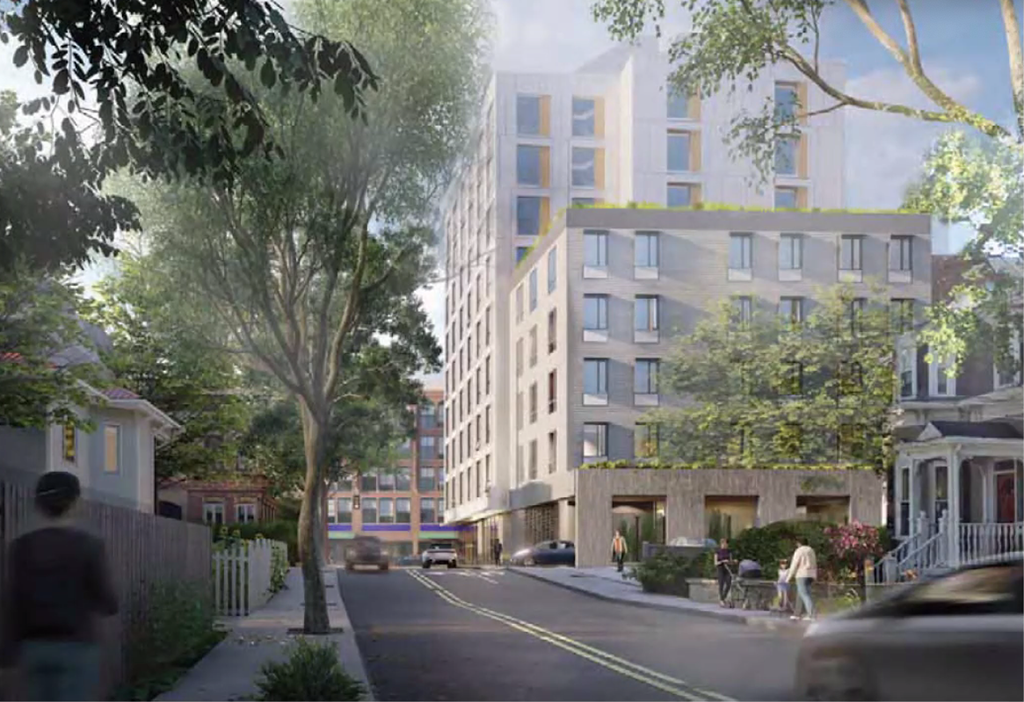 Developers of a proposed affordable-housing building for North Cambridge have lowered a rear portion to five stories from six along Walden Street in renderings.

Changes in the all-affordable building proposed for 2072 Massachusetts Ave. didn’t change how the Planning Board felt about it, and members voted 5-0-1 on Tuesday to affirm its endorsement of the North Cambridge project to the Board of Zoning Appeal, where it goes next.

The abstention was vice chair Mary Flynn, with the explanation that she hadn’t been a part of discussing the project at its previous hearing in December.

The building is proposed by developers Capstone Communities and Hope Real Estate Enterprises as keeping its nine stories at the front but dropping a rear portion along Walden Street to five stories from six. The change boosts the number of one-bedroom units slightly while dropping the number of two- and three-bedroom units; overall, the project is proposed as having 48 units, down from 49, with two-thirds expected to rent to families now, down from 71 percent. (The developers briefly proposed lowering the tower portion of the project to eight stories, with six stories along Walden Street.)

There will also be a smaller roof terrace, a lowered parapet that the developer said would still serve to hide rooftop mechanicals such as air conditioning and heating, and four fewer windows to the east that would have looked most directly at the senior housing next door, the Cambridge Housing Authority’s six-story Leonard J. Russell Apartments.

Aside from some concerns about parking – the building will have only three accessible spaces – Planning Board members called the building “handsome” and “beautiful” at that Dec. 1 meeting, said they were not worried about traffic or adding up to 200 residents to the area, and in the words of member Steven Cohen, found the added affordable housing “politically and socially and morally needed in the city.”

None of that had changed Tuesday.

“The changes that are proposed are in the nature of refinements. The essence of the design that we reviewed is really the same,” member Hugh Russell said. “If we supported that before, I can’t see why we would change our minds.”

Board members saw the changes as small enough that they rejected taking more public comment Tuesday. “We had a lengthy hearing on it. And we received many, many pages of additional comments,” H Theodore Cohen said. “I really would not want to [again] hear all of the comments about traffic and parking and whether it’s appropriate for the neighborhood and so on and so forth, which we have heard in great detail and received thousands of pages of comments about.”

Though Cohen proposed taking comments only about the changes from the previous version of the proposal, the idea was not discussed further or voted on, and members went directly to affirming their position to the BZA.

Co-developer Sean Hope said he and partner Jason Korb had a nearly 300-person petition in support of the project from around the neighborhood, but did not ask supporters to speak because “there has been robust dialogue already.”

Opposition and a complaint

There also remains significant opposition to the project from neighbors on Walden Street who do worry about its size, density and effect on traffic, and particularly from Russell Apartments residents who say they will lose their sunlight, privacy and safety as pedestrians when the building goes up.

“The current proposed design will have a significant and permanent negative impact on us. The proposed building is to be built with no setbacks and will tower over us,” Russell Apartments resident Margaret Rueter said in a letter to the Planning Board.

The Russell Apartments’ size compared with the proposal had become a point of contention with the developers, with residents complaining that renderings of the project misrepresented the contrasting heights. On Tuesday, Korb agreed that the residents had a point, and presented a new set of images that showed the heights corrected – the senior housing looking even more dwarfed by the proposed nine-story tower. “By triangulating surveys, counting bricks and measuring the building, we’ve are now showing it at 59 feet high, which we believe to be its accurate height,” down from renderings that showed the Russell Apartments as 70 feet tall, Korb said.

A plan for the Broad Canal in Kendall Square was also heard Tuesday, but underwhelmed Planning Board members voted to continue the hearing in hopes developers would bring back a better one. Beals Associates hoped to create a pass-through between buildings that will connect Main Street and the canal while adding 7,000 square feet of commercial and entertainment space, but drew questions about the quality of the proposal and its lack of housing. After proponent Larry Beals had shrugged off housing as a “subjective” decision based on how he assessed the area, several board members came back and stressed it as vital.

“That whole mixed-use concept is actually built into [decades of] planning studies and design guidelines – specifically the K2 study looked at this … and I guess I have yet to hear a compelling reason why this proposal improves upon those ideas,” said Catherine Preston Connolly, chair of the board, saying the Beals proposal “doesn’t do anything to improve on the existing buildings, which everyone on this call seems to have agreed are dated at best, and does do some things that might reduce the value of the public realm.”

The proposed amenities were nice, she said, “but to me not as valuable as providing meaningful housing opportunities.”

Speaking after public comment that noted opposition by the neighborhood group the East Cambridge Planning Team, Russell summed up the Broad Canal zoning proposal bluntly: “I’m appalled by this.”

Height at 2072 Mass. Ave. project again rejected by zoning board; project to return in September