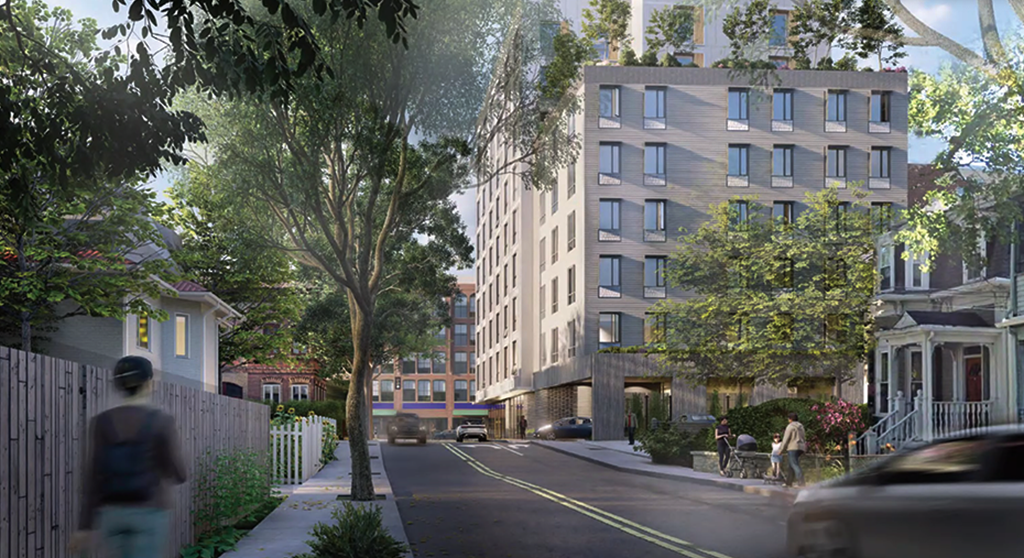 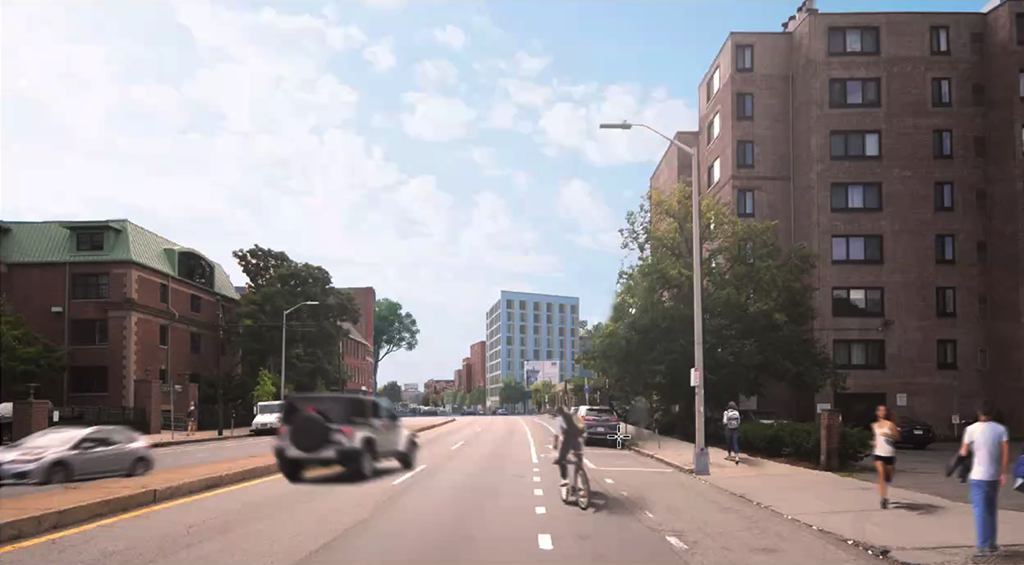 A building proposed for 2072 Massachusetts Ave., North Cambridge, is seen at a distance in a rendering provided by the developers.

A nine-story building with all affordable apartments – 49 in all, of which 71 percent are for families – arrives Thursday before the Board of Zoning Appeal with a positive recommendation from planning officials, but some riled-up neighbors and serious concerns from one city councillor.

“It’s like context does not matter anymore. And my biggest fear is that this opens the door to other upzonings,” said councillor Dennis Carlone, referring to the building proposed for 2072 Massachusetts Ave., North Cambridge, replacing a one-story, freestanding Darul Kabab restaurant. Carlone is an architect and urban planner with extensive experience on Cambridge projects, including many affordable projects.

During a call Sunday, he expanded on the concerns he expressed Dec. 1 to members of the Planning Board: That the project will “set a precedent for every new affordable housing building. I think that’s dangerous.” 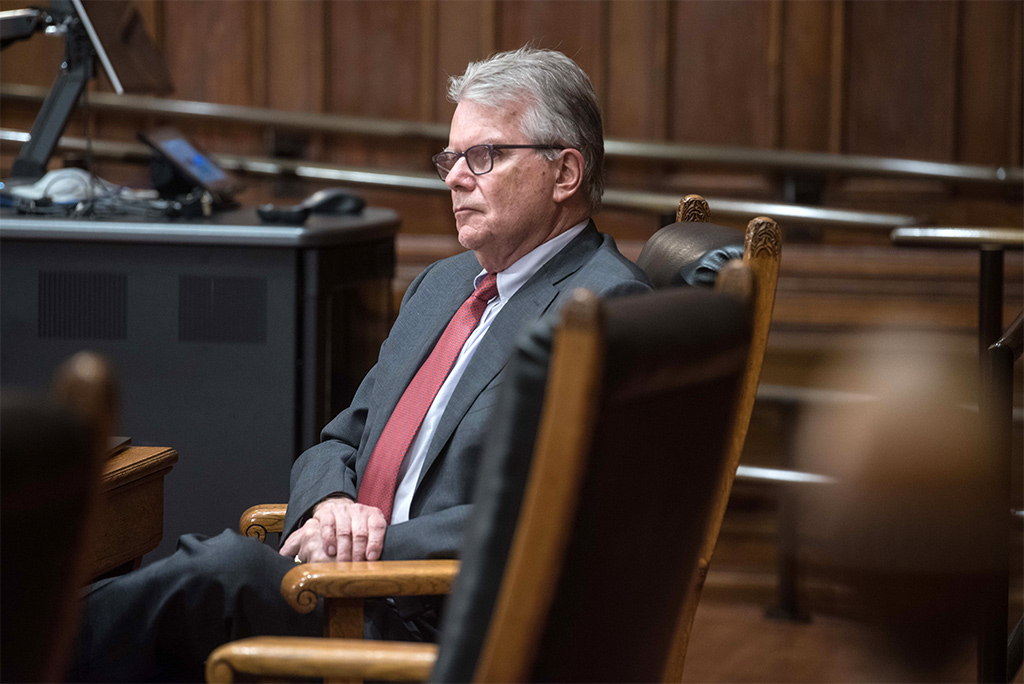 The city approved citywide affordable housing overlay zoning in October that was meant to pave the way for more 100 percent affordable projects by reducing location and design challenges – but the overlay calls for buildings of up to 70 or 80 feet that “relate [to] existing adjacent buildings,” while the proposed project peaks at 102 feet, and its neighbor is a 60-foot building with senior housing. Instead of relying on the overlay zoning, the proposal looks to 40B zoning, which refers to a state law that overrides some planning guidelines and is more typically used when a community has less than 10 percent affordable housing. (Cambridge has around 15 percent.)

The developers plan to ask Thursday for 17 exemptions from city ordinances and regulations. While some are as slight as relief from having the City Council “assign numbers to houses,” one crucial request is to use 40B and be released from “Article 19” project review requirements and the need to litigate special permits from the Planning Board. The design of the project, including its height, density and placement, as well as some traffic and parking needs, departs from city guidelines, though it bows to one: It steps down in its rear to acknowledge the relationship to lower homes. While once eight stories across, it is now pitched as nine stories on the avenue and six stories behind, with greenery on the overlooking deck.

The original project and the two-level version slated to be heard Thursday by the Board of Zoning Appeal, seen in renderings provided by the developers.

The building is proposed for a 8,515-square-foot lot at Massachusetts Ave. and Walden Street, which grows abruptly residential after leaving the avenue, with low-slung buildings and many single-family homes. But the Porter Square-adjacent traffic doesn’t reflect that, and some neighbors to the project have formed a group called the North Walden Neighbors to say it’s too dangerous for an additional 200 residents – especially in a building with three parking spaces and two spaces for deliveries or ride-share pickups, and despite the developers committing to widening Walden Street at the intersection.

“I get that the Planning Board’s goal is to help the city with affordable housing. I get that. But to me, after all that work for the AHO, to completely throw it aside and just use it as a steppingstone is wrong,” Carlone said.

Carlone said he’s already heard discussion of a Central Square residential upzoning, where limits rose to 85 feet just two years ago, after his similar fears of the precedent-setting power of Mass+Main, an apartment building now known as Market Central. In a real estate prospectus shopping a sale of the Middle East nightclub complex, Hunneman brokers have envisioned a tower rising to match Market Central’s height across the street.

In endorsing the 2072 Massachusetts Ave. project, Planning Board members spoke to the overlay zoning anyway. “The overlay basically said, push the envelope for all affordable projects. It’s a way of making them happen,” board member Hugh Russell said Dec. 1. “I think this building responds to this spirit of the affordable housing overlay. It would be, in my sense, more attractive if it followed the actual letter of the AHO, but I doubt if it could be built.”

“If you want it, I think you have to go for it,” Russell said – and he was among the more dubious of the board.

Member Tom Sieniewicz, though, noted that 40B is also applicable in Cambridge “to examine the project and make a judgment about whether the need for housing in this community outweighs planning concerns.” And there was an urgent need for affordable housing, he said, “as a question of social justice.”

In addition, board members agreed with Sieniewicz’ appraisal of the proposed building as “beautiful.” 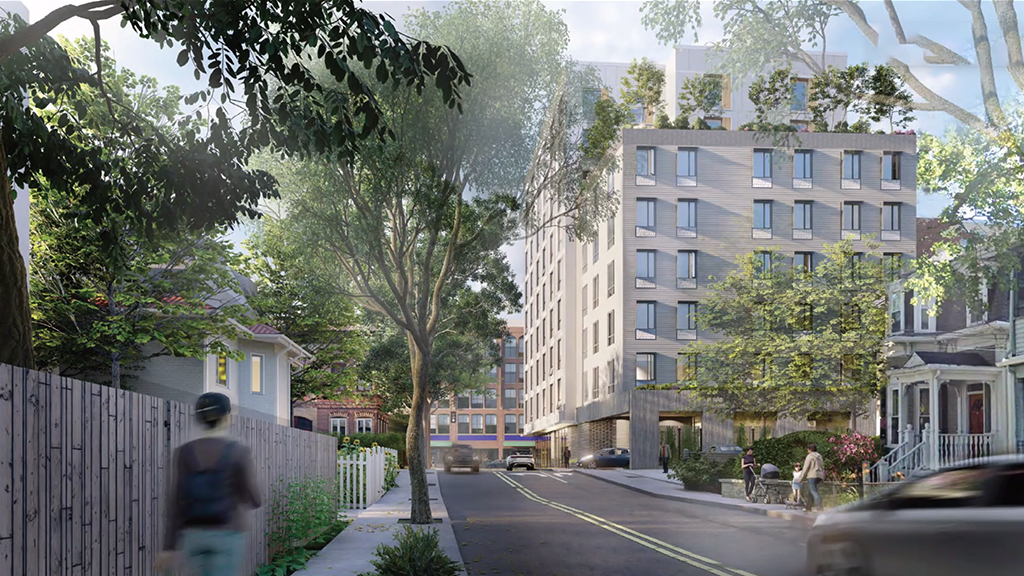 A view of the building from Walden Street in a rendering provided by the developers.

In answer to parking concerns expressed by some neighbors, member Steven Cohen proposed that tenants who drove be discouraged from renting there as “a practical and moral acknowledgment that this excellent building was designed specifically for people who don’t have and need cars.” (Joseph Barr, director of the city’s Traffic, Parking & Transportation Department, had to clarify later that while car ownership was expected to be lower than in some other parts of the city, Cohen’s proposal raised constitutional issues.) A parking study by the developers suggested that there might be 25 cars among tenants, but their drivers could use some of the 281 spaces available even at peak hours within a quarter-mile of the building.

During a Friday meeting with developers Capstone Communities and Hope Real Estate Enterprises, some neighbors said they found the parking claims dubious and could not understand why there was a parking study but not a study of traffic at the site. They were not mollified by learning from principal Sean Hope that “a traffic impact study wasn’t part of the conversation. If you want to understand why he asked us only to do a parking study, you need to ask [Barr].”

Carlone said Sunday that he was upset that the Planning Board felt the need to eschew planning in favor of getting the maximum number of affordable units – “Good planning and development can occur together,” he said. But he placed much of the blame on the city’s failure to build affordable housing on property potentially bought through the Cambridge Redevelopment Authority, which would lower costs down the line, and on land it already owns, such as parking lots.

As he understood the costs of the 2072 Massachusetts Ave. site, the developers could make back their money with a much smaller project more appropriate to the size of the lot – 30 units in a 70-foot building, Carlone said. “I’m told the original proposal was 60 feet. And why it kept going up, I don’t know,” he said, wondering if it was “greed by the development team” who will be paid by the unit.

The development companies, led by Hope and Jason Korb, have a history of building all-affordable projects, though, including the 20-unit Port Landing near Kendall Square and 40-unit Frost Terrace, which is, like 2072 Massachusetts Ave., near Porter Square.

“The real issue is that we’re in a housing crisis right now. Our people are suffering,” Korb said, underlining his message to the Planning Board that “demand is off the charts. It was off the charts prior to Covid. And since Covid, it’s become incredibly more severe.” At Frost Terrace, they have answered calls for 400 applications, he said, and Finch Cambridge, the former Concord Highlands, recently saw more than 2,261 applicants for 98 apartments. “This is real,” Korb said.

“It would be easier just to do a six-story AHO building,” Korb said. “We believe in” building affordable projects.