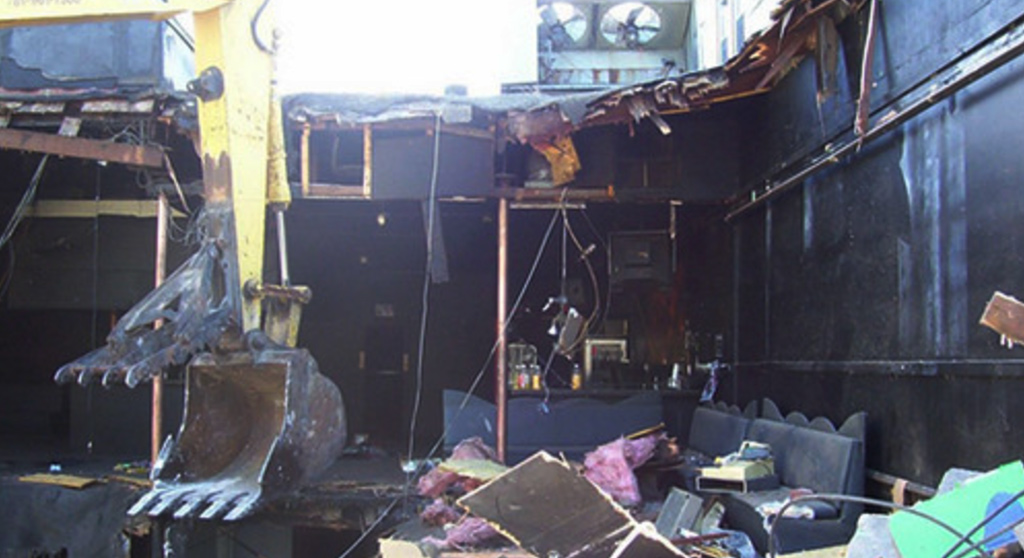 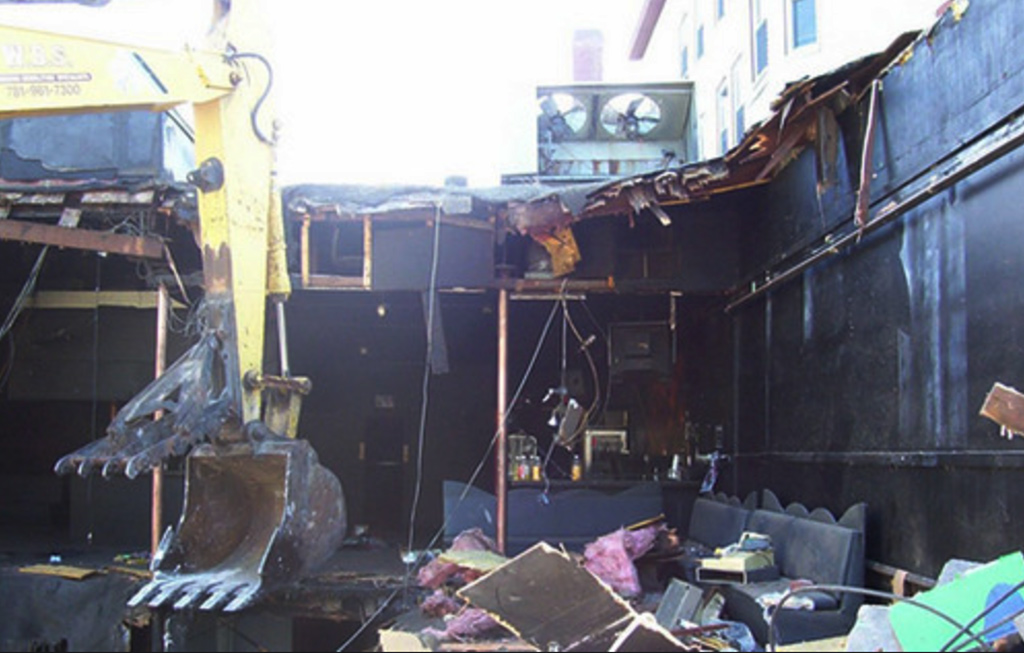 Demolition in 2005 at ManRay on Brookline Street in Central Square. The photographer is unknown.

Returns of Cambridge institutions are in the works: The Cantab Lounge is on the License Commission’s agenda Wednesday with proposed new management, and there’s chatter online that the People’s Republik bar will reopen – possibly as soon as July, if licensing issues can be worked out – as New Republik, taking over the Inman Square space that once held The Rising sports bar. Its Mid-Cambridge site closed permanently in February, ending a run begun in the 1990s; the Cantab looked dead in July after 82 years of beer, music and poetry.

But perhaps the biggest news is that Don Holland is seeking to resurrect his legendary ManRay nightclub at 40 Prospect St., Central Square, a space the ImprovBoston comedy club vacated in November under financial pressure from the extended coronavirus lockdown.

ManRay, a goth fetish club, lasted at 21 Brookline St. in Central Square from 1983 (starting as Campus, with ManRay emerging two years later) to July 2005, when its distinct, bunker-like structure was razed to make way for an apartment building. ManRay was home to the area’s goth, fetish, LGBT and BDSM scenes while hosting such performers as Nirvana and Bauhaus’ Peter Murphy; since its closing those scenes have dispersed to other area clubs, and ManRay regulars hold reunions regularly. Former ManRay DJ Chris Ewen and bartender Terri Niedzwiecki host nights at clubs in Cambridge and Boston, including Halloween and New Year’s Eve spectaculars.

Ewen declined to comment for this story when contacted Wednesday.

Holland faced a series of disappointments in trying to resurrect his club over the years, and eventually had to surrender the site’s unused liquor license.

Four months ago, those hopes were rekindled, Holland said on a Monday call. “I got my lawyers, I got my architect,” Holland said from a home in Maine. “I’m still trying to get my permit.”

Holland said he plans to take down walls inside the Prospect Street space, where ImprovBoston had separate stages, but wanted to leave details vague – including a potential opening date – until he was further along in the permitting process. He has yet to come before the License Commission. “It’ll be similar to what I did before,” he said of the future ManRay.

When he goes out to events run by Ewen and Niedzwiecki, “100 people come up to me and say, ‘Why don’t you reopen?’” Holland said. While researching a reopening he encountered “negative people saying, ‘Oh the ManRay people are all gone, it’s a new era’” and the club isn’t needed in 2021.

“It’s not true,” Holland said. Though times have changed in other ways, with more attention to cultural and sexual sensitivities, ManRay was a safe space that never incurred violations or allegations of allowing criminal activity, he noted.

Over the years, Holland has said he hasn’t wanted MayRay to be anywhere but in Central Square – Holland’s brother ran Hi-Fi Pizza for more than 45 years in Central Square – a message attorney James Rafferty transmitted to the Licensing Commission all the way back in 2013.

All is not lost for ImprovBoston, either, managing director Josh Garneau said Monday. Though his “homeless theater” is focused on performances at the open-air Starlight Square next, we “are seeing where else we can fit ourselves in.”

“We are looking for new space,” Garneau said. “And while we explore the options for new spaces out there, we are planning on visiting various venues throughout the city.”