Grants to arts nonprofits flowing, but amounts aren’t enough to save ImprovBoston’s theater 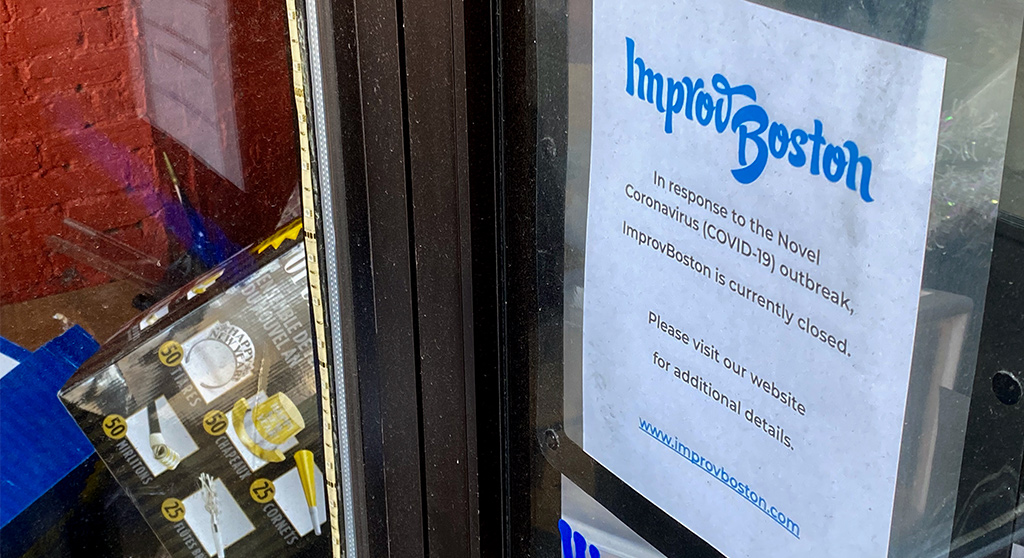 Grants to arts nonprofits flowing, but amounts aren’t enough to save ImprovBoston’s theater

The ImprovBoston comedy club is giving up its theater space in Central Square after months without revenue resulting from a coronavirus lockdown. (Photo: Marc Levy)

The city and Cambridge Community Foundation have delivered on long-awaited help for arts nonprofits battered by coronavirus closings, but the size of the grants are, for some, simply not enough. The ImprovBoston comedy club in Central Square, despite getting money through the fund, is giving up its theater’s lease.

A crew is in the 40 Prospect St. space this weekend cleaning up its two stages, crew space, lobby bar and basement from March’s abrupt shutdown, clearing it out and “bringing community members in to say goodbye,” said Josh Garneau, managing director for ImprovBoston. “It feels like it’s saying goodbye to a childhood home. This place has a lot memories.”

ImprovBoston has been able to survive for decades on ticket sales, class enrollment and other forms of revenue. (The theater’s first storefront was in Inman Square space in 1990.) But after furloughing most of its staff in July, the club had also given up its Bishop Allen Drive space several months ago; it plans to maintain a foothold in Cambridge at its 620 Massachusetts Ave. training space. “But we won’t be putting on shows any time soon,” Garneau said Friday.

ImprovBoston’s space at 40 Prospect St. is being dismantled and cleared out this weekend. (Photo: Willy Hennigan)

Arts nonprofits were last in line after grants were made through the Mayor’s Disaster Relief Fund to residents, then businesses and finally other kinds of nonprofits. Grants specifically for arts nonprofits citywide were proposed at the City Council on July 27, but councillor E. Denise Simmons acted to delay approval of them until Sept. 14. The resulting Cultural Capital Fund with upward of $600,000 was announced Oct. 28 – with $500,000 reallocated from the Mayor’s Disaster Relief Fund and the other $100,000 donated by the Wagner Foundation. The Cambridge Community Foundation said it has committed to building an endowment for the city’s arts and culture sector of $5 million over five years.

Local businesses were invited to apply for grants of up to $25,000 for facilities or $10,000 for programming. The donors “wanted to touch as many institutions as we could … [We were] trying to be adaptive to both kinds of needs,” assistant city manager David Kale said. He couldn’t supply a number of applicants, because submissions were still being processed this week; one figure mentioned in the arts community suggests there are more than 60 eligible arts organizations whose “primary mission must promote access, excellence, diversity or education in the arts and culture,” among other qualifications. (Though the foundation’s Cambridge Artist Relief Fund awarded individuals such as choreographers and sculptors, the new grants are not available to “individual artists and groups.”)

That’s when leaders at ImprovBoston had to make a difficult decision. “We were talking about it through the whole week,” Garneau said. Nov. 6 is “when we said, ‘We can’t do this.’”

“We are hopeful that come spring or summer, when real estate is back to normal and there is a vaccine, we will be able to … resume our operation,” Garneau said. The theater group opted for programming funds despite it being the lesser amount “because we knew that unless we had more operating money we would just spend [the capital funds] and turn the lease over to the landlord.”

It’s the lack of influence over landlords that limited the effect of the city’s money, Garneau said. “The city has been doing everything they possibly can” and has artists’ “best interests at heart,” but it simply isn’t enough for his group, or others. “Times are really tight right now, and there are a lot of people who are on the fence about whether to hang on to their leases,” he said. “We’re all paying for space that we cannot use, and it feels like a financial anchor around our necks.”

Like the comedy club, The Dance Complex in Central Square is long-established and large. With its annual operating budget of around $800,000, the biggest grant available from the Cultural Capital Fund would not be a one-stop solution, said Peter DiMuro, executive artistic director of the dance organization. “We’re always looking for money. But in a good year, we’re seeking $100,000 just to get a smattering of programming,” he said Friday. “It’s a continuing battle.”

The Dance Complex was finishing up work on other grants and hadn’t yet applied to the Cultural Capital Fund, DiMuro said. The city is now seeking letters of intent, DiMuro said, and he was curious to see if there would be an amendment allowing the money to be used for a mix of facilities and programming needs.

While he was “grateful” for the grant opportunity, DiMuro said he wished The Dance Complex had been eligible for more grants throughout the crisis as a “true business” that employed many and was an economic driver for the city.

Michael Monestime, executive director of the Central Square Business Improvement District, agreed there was reason to be grateful.

The fund is an acknowledgment of how Cambridge’s nonprofits, small businesses and the arts and culture organizations contribute to the city’s economic well-being and vibrancy, City Manager Louis A. DePasquale said, and city officials said they were inspired to fund the nonprofits because they believe in the importance of Cambridge’s artists and their institutions.

“This work is a testament to the fierce commitment to our city’s cultural vibrancy that we’ve seen in our residents’ advocacy and our city’s leadership … We’re incredibly fortunate and extremely thankful to have the City of Cambridge’s partnership and the Wagner Foundation’s support in addressing the urgent needs of our arts organizations who are near closure due to the pandemic,” said Geeta Pradhan, president of the Cambridge Community Foundation. She invited donors and partners to join in supporting the organizations with a lasting endowment.

Josh Garneau, managing director for ImprovBoston, takes part this week in a tradition at the comedy club: Signing a green room support beam as performers leave the theater for the last time – in Garneau’s case, after 12 years. (Photo: Willy Hennigan)

As the fund rolled out in October, vice mayor Alanna Mallon – the de facto “arts councillor” leading efforts for the sector since the EMF music community was ousted from its building near Central Square in 2018 – spoke of the fund as a ray of hope. “Arts organizations were the first to close in March and will be among the last to open their doors. Without this financial support from the city, and other donors, we can expect sector-wide closures with staggering ripple effects,” she said.

ImprovBoston’s Garneau hoped there were small organizations in Cambridge for which the capped grants would be the solution that saw them through the coronavirus crisis.

Either way, he didn’t blame the city for the club’s “slim” odds of reopening fully.

“If I was to assign blame somewhere … the lack of response from the federal government is really where I’d focus on. There has not been any significant movement since the CARES Act was passed at the beginning of all this, and we’ve just been sort of left to flounder, which has been disappointing … I know that ImprovBoston is not the only group that has been feeling this way.”

The organization was doing well before Covid-19, and “the fact that it could go from thriving to shut down within a few months is very sad,” he said.