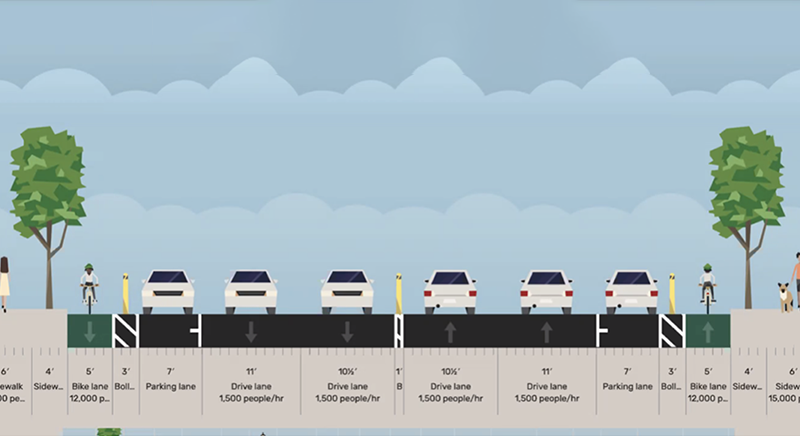 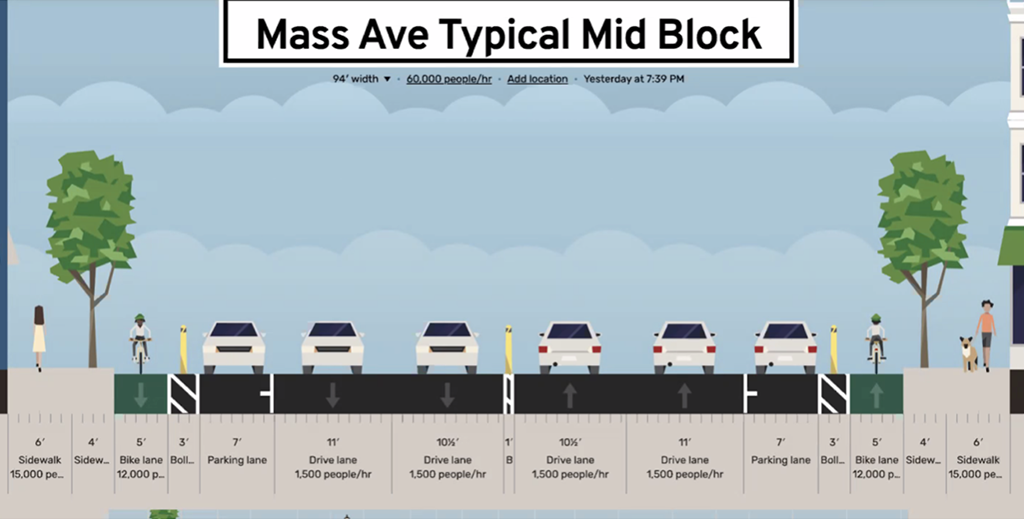 A potential design of Massachusetts Avenue by the Porter Square Neighbors Association relies on elimination of a concrete median.

City staff allayed community concerns Wednesday around losing Massachusetts Avenue parking spaces to bike lane installations, telling residents during a hearing that “we do not intend to implement that version of the plan.”

“It’s really the starting point for a conversation about how we move forward with putting in separated bike lanes and what that looks like,” said Joseph Barr, director of the city’s Traffic, Parking & Transportation Department, during his opening remarks to a City Council Transportation and Public Utilities Committee.

A report issued by the city in May had worried many people about the city’s approach to fulfilling obligations from a Cycling Safety Ordinance to install protected bike lanes along the so-called “MassAve4” – four particularly difficult segments of Massachusetts Avenue.

Barr pointed to the city’s plan to install 4.9 miles of protected bike lanes in 2021 as a sign of its commitment to the ordinance. “Hopefully, the progress both this past year and in the coming year demonstrates we are obviously taking this ordinance and its requirements extremely seriously and working very hard to get all that work done,” Barr said.

The ordinance lays out a variety of requirements to install separated bike lanes along all of Massachusetts Avenue. City planners must submit plans by April 30 detailing which segments of the MassAve4 will get quick-build bike lanes – meaning those that do not require major construction – and which need full reconstruction.

Kathy Watkins, the city’s engineer, said residents could expect full reconstruction of two small segments of Massachusetts Avenue in Harvard Square “identified as extremely difficult” because of narrow roadways and a mix of bike, bus and car traffic. The city proposed a model similar to the “floating” bus stop island at Western and Putnam avenues, where a bike lane separates it from the sidewalk, with work falling into the 2023 and 2024 fiscal year budgets.

The proposal is the first of what could be many the city will detail over the next 10 months to meet the 2022 planning deadline. “Our intent is that we’re going to be working collaboratively in consultation with the community and with other stakeholders, and very importantly with the entire City Council, to figure out what is the best plan,” Barr said.

Bike activists and city councillors are expected to look closely at the city’s timelines and repeat calls for urgency in addressing safety on Massachusetts Avenue. The updated Cycling Safety Ordinance includes a poison pill to install quick-build bike lanes by April 30, 2024, if staff and councillors cannot come to an agreement on reconstruction plans. “I also emphasize that street design is a life-or-death public safety issue. We’ve had multiple people killed while walking or biking on the parts of Mass Ave we’re talking about today,” said councillor Jivan Sobrinho-Wheeler, chair of the committee.

The Porter Square Neighbors Association formed a working group to study the report issued by the city in May and presented its findings at the hearing. In general, the group took issue with the one-size-fits-all approach outlined in the report and presented four alternate designs for segments of the MassAve4.

Steven Beaucher, owner of Ward Maps in Porter Square, and Katherine Beaty, of the Cambridge Bike Safety group, presented a design that eliminates the concrete median that runs along certain parts of Massachusetts Avenue. They said removing the median would free up space to “meet all the stakeholders’ needs with fewer tradeoffs”: separated bike lanes, parking and loading zones and motor vehicle lanes.

PSNA member Jeanne Oster, the owner of Guitar Stop in Porter Square, also highlighted unease in the business community with the city’s report, where results included elimination of all or most parking along large stretches of Massachusetts Avenue. “We want bicycles to be safe, but we don’t want to kill our businesses in the meantime,” Oster said.

Discussion foreshadowed a process of public engagement and planning leading up to an anticipated April council vote on final plans for the MassAve4. “I think we do want to lay out a process going forward over the next six to eight months to have all these conversations in more detail,” Barr said.

Councillors at the meeting expressed a strong desire to be part of the design process. “I think there’s a huge desire you’re probably hearing from the whole committee to be kept up to date and not be surprised about what is happening,” vice mayor Alanna Mallon said.

The council expects to reconvene in about four months at another transportation committee hearing for an update from staff. Residents can expect more public comment periods on potential designs in the meantime, transportation officials said.

Though not the focus of the meeting, the city pointed out that its Mid-Mass Ave project – which spans Massachusetts Avenue from Inman Street to Trowbridge Street – is “pretty much ready to implement” but has run into supply issues resulting from the Covid-19 pandemic. “We’re waiting on our vendor in our contract to be able to supply the flex posts for that project, so that may delay us a little bit,” Barr said.