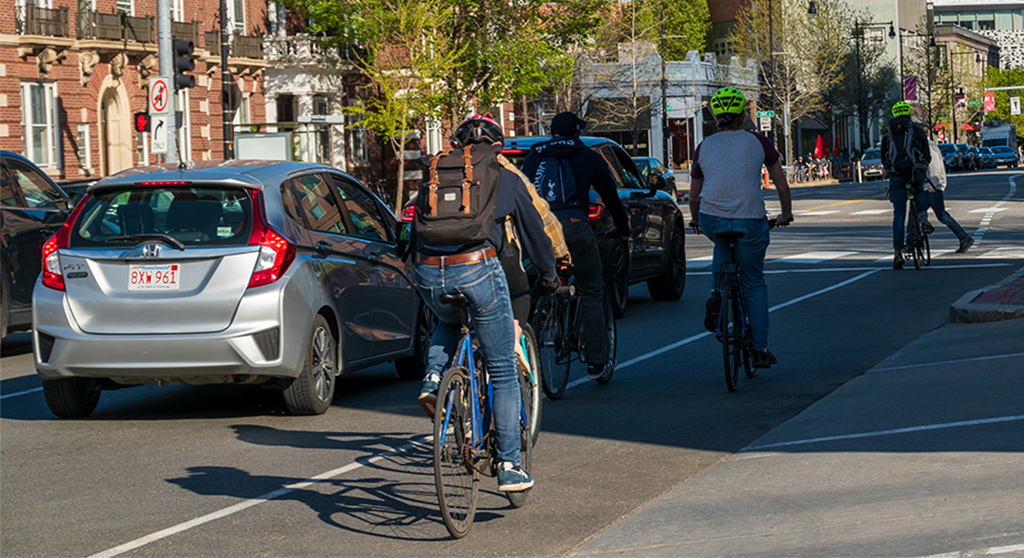 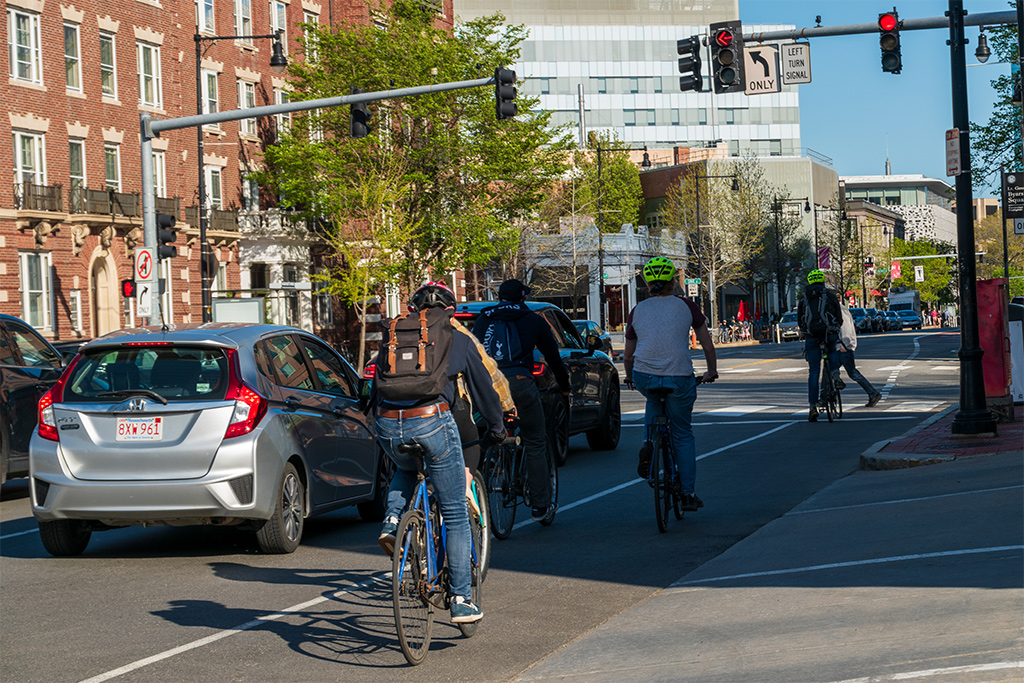 The release of an impact report marks the first milestone in a sprint to develop protected bike lanes along Massachusetts Avenue, one of Cambridge’s busiest streets – one that some officials and cycling supporters fear will slow down and take years to see action on.

While the April 30 report says it “does not indicate whether or not we will proceed with installing quick-build separated bike lanes,” cycling advocates are worried that hyperbolic language on the negative impacts of quick-build installation will push public opinion and the city manager toward a full-scale reconstruction that will take years to realize. “A capital project will push making Mass. Ave. safer” by years, said Nate Fillmore, of the Cambridge Bicycle Safety Group.

Mandated by an update to the Cycling Safety Ordinance passed in October 2020, the report studies the impact of installing quick-build bike lanes along some of the trickiest stretches of Massachusetts Avenue. Quick-build bike lanes usually consist of repainting the street and installing flex posts and do not require digging or major construction.

The report, released just in time to beat a May 1 deadline, foreshadows a looming fight to install separated bike lanes between Harvard Square and Davis Square. The updated Cycling Safety Ordinance requires the city manager and City Council to reach an agreement by April 30, 2022, on which areas will be eligible for quick-build bike lanes and which will require full-scale reconstruction. In the event the two sides are unable to come to an agreement, quick-build bike lanes must be installed by April 30, 2024.

All sides are eager to acknowledge that the so-called “MassAve4” — four particularly difficult segments of Massachusetts Avenue — will require special attention due to their unique features, including bus stops and overhead catenary wires for MBTA buses. “We knew going in that they were going to be very challenging to do,” said Joseph Barr, director of the city’s Traffic, Parking & Transportation Department, in an interview on May 12.

The report acknowledges the same, and its authors contend they are “simply providing information on the impacts of installing quick-build separated bike lanes” so the city manager can make an informed decision when recommendations are delivered to the council.

The report lays out a number of general benefits to adding separated bikes lanes. “Separated bike lanes are safer than standard bike lanes because they significantly reduce the potential for a conflict between people driving and people biking,” the report says. For pedestrians, “bike lanes make streets more comfortable for people walking, because they generally reduce the number of lanes that people have to cross at one time.” 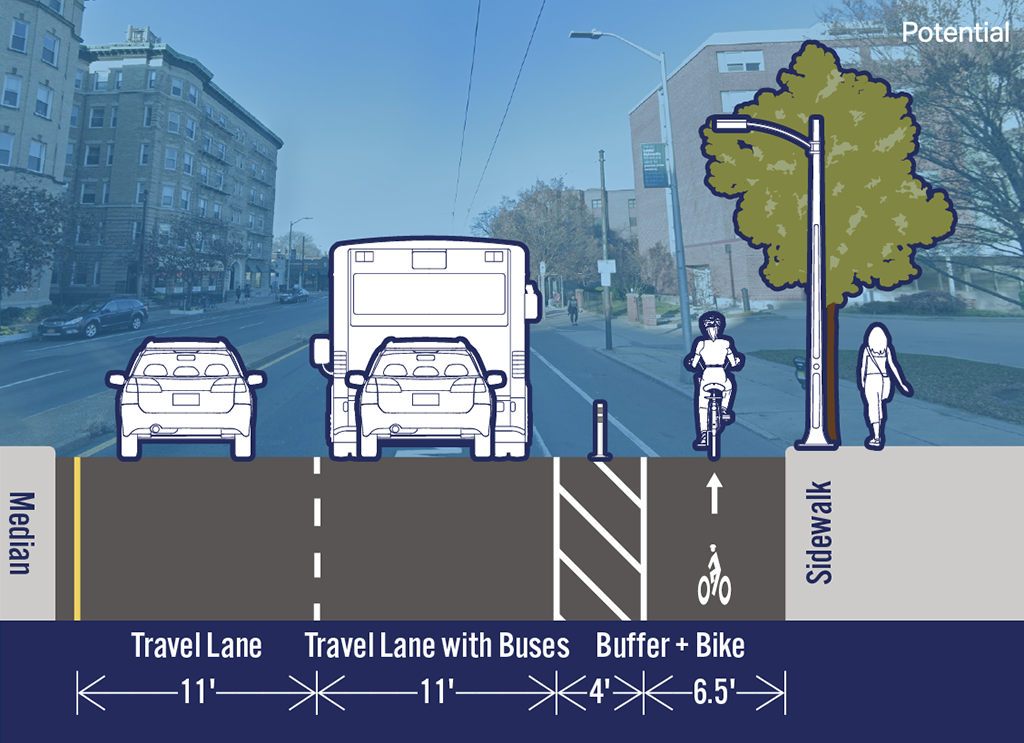 A proposed separated bike lane from Everett Street to Hudson Street between Harvard and Porter squares.

The impact report studies a new configuration of Massachusetts Avenue with separated bike lanes replacing parking and loading zones as the rightmost traffic lane, a separated buffer with flex posts, and then two lanes — or in places where the road is too narrow, one — of mixed bus and car traffic.

The city summarizes the impacts as “severe” and “extreme” to car and bus traffic in areas where the addition of a bike lane narrows the road  to one lane of car and bus traffic from two. It also notes the implied opportunity cost for dedicated bus lanes because the inclusion of a dedicated bike lane makes a dedicated bus lane impossible due to the width of Massachusetts Avenue. Many segments studied would remove all parking or loading zones, which would affect parking and business activities, the report notes.

The city admits the design is a first attempt to study the problem. It was “based on a very basic review of the corridor,” Barr said. “We absolutely want to delve more into this.”

The report notes two other potential configurations, but does not study them in depth. Instead, it rules them out across all of the studied areas due to concerns along particular sections of Massachusetts Avenue. 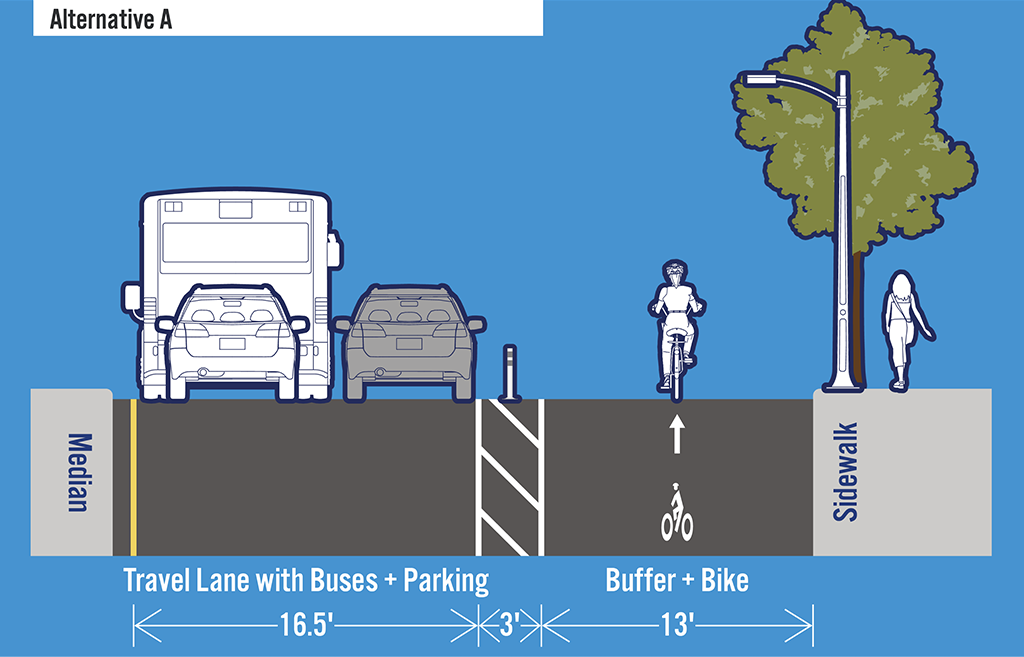 “Alternative A,” which features one travel lane for buses and cars, a floating parking lane, buffer and then bike lane, is ruled out because of fire department concerns about the location of catenary wires in Harvard Square. Firetrucks would be unable to reach some floors of buildings in the area with the wires in the way. 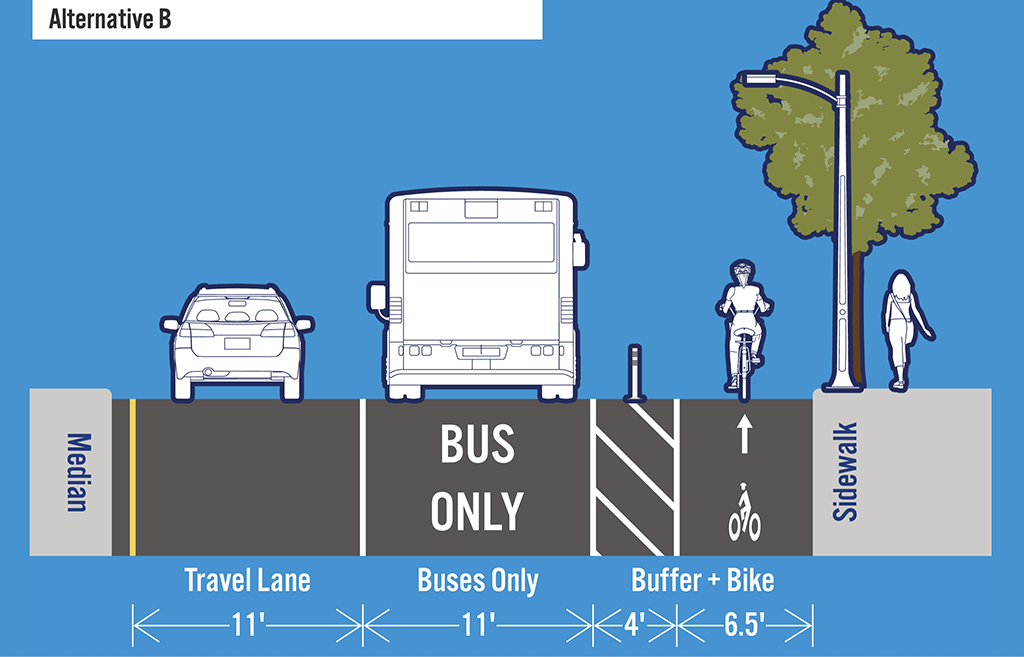 “Alternative B” considers a dedicated bus and loading lane, but is ruled out due to concerns raised by traffic simulation showing long backups at each intersection. While the city did not release its traffic simulations, Massachusetts Avenue features many left turns, which could lead to backups when a driver in a single lane of traffic needs to wait for a break in traffic to make a left turn.

Cycling advocates wish the same in-depth analysis applied to the main design proposal was given to these alternatives. “The city’s report focuses on one of a number of possible design options and applies that single design uniformly to every block. The analysis of impacts is done block-by-block, but only one single design is applied to every block regardless of the abutting land use or community preference. This is not reasonable, is not something the city would realistically proceed with and definitely is not something we would ever support,” Fillmore said May 11.

A more comprehensive approach would have included an analysis of which of the possible design options might work best on each block of Massachusetts Avenue, Fillmore added, including different mixes of parking, loading, bus lanes and turn lanes depending on what works best on each individual block.

“It’s not reasonable to eliminate all parking between Harvard and Arlington and make no changes to buses. It’s not what the bicycle community is asking for,” Fillmore said.

The City Council became aware of the report when it appeared on its May 10 agenda. Councillors who spoke on the report expressed hope that the city and community would continue to work collaboratively to solve the safety issue facing cyclists. “I appreciate the report and look forward to discussing it in the transportation committee,” councillor Quinton Zondervan said.

While the councillors acknowledged the time and effort put into the report, at least two expressed reservations with the content. “I know I had a number of questions on it and other councillors and community members did as well,” said councillor Jivan Sobrinho-Wheeler, chair of the council’s Transportation Committee, before referring discussion of the report to a future transportation committee meeting.

“Some of the language was pretty ‘This is going to be a disaster’-type of thing. It does tend to sway the conversation one way,” councillor Marc McGovern said. “It gives an impression that leans in one direction. I think it can get people nervous. As we write the report, I hope we pay attention to the language that we use.”

Zondervan said he was “disappointed with the answer in the report. It basically says we can’t or shouldn’t do a quick build, and that really means we’re looking at years and years and years before we get protected bike lanes on this section of Mass. Ave.”

The city’s transportation department sees the report as the first step in developing a strategy to implement separated bike lanes on Massachusetts Avenue. “I definitely recognize that there are some concerns about seeming like or being overly negative, but I think we really are just trying to start that process by understanding those impacts and then coming back over the next year for discussions with the City Council,” Barr said.

Discussions of the report will continue in a transportation committee meeting scheduled for this summer. Details for the meeting will become available soon.