‘Zola’: Stripper showdown in the Sunshine State, increasing in tension with every raunchy tweet 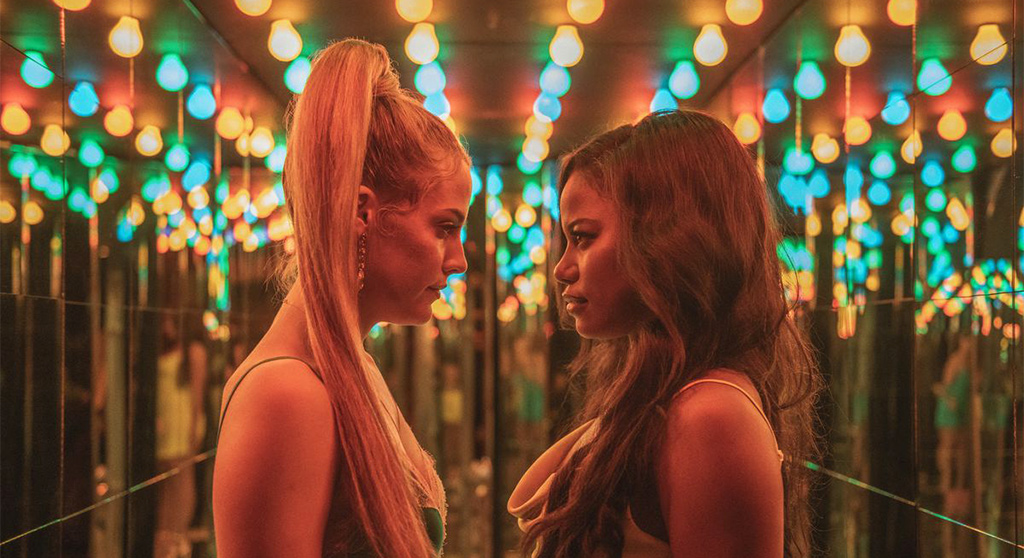 ‘Zola’: Stripper showdown in the Sunshine State, increasing in tension with every raunchy tweet

Well, here we are, people, the first movie adapted from a tweetstorm. Not an incoherent, three-in-the-morning political shaming from @realdonaldtrump (account suspended) but one from a 19-year-old Detroit server and exotic dancer named A’Ziah “Zola” King, who chronicled her 2015 shitshow of a road trip to Florida after being enticed along by a fellow dancer under false premises. The 148-tweet thread that plays out like “Hustlers” (2019) on steroids even garnered King an exchange with “Selma” (2014) director Ava DuVernay: “There’s so much untapped talent in the hood,” DuVernay said. Zola’s response: “I’m not from the hood tho Ava. Ima suburban bitch. Still love you tho.”

The real-life King worked at a Hooters. In this stylish, day-glo rendering by Janicza Bravo (episodes of “Dear White People” and “Them”), Zola, played by Taylour Paige, works in a diner and pole dances at night. One day when waiting on an interracial couple, the trashy girlfriend (known as “the white bitch” in the tweet blasts, tagged here as Stefani and animated effusively by Riley Keough) chums up to Zola. “Wanna dance?” she asks casually. Even though we’re in Zola’s head, with her tweets and thoughts coming to us in voice-over, we don’t get much of an inkling as to what the conversation is really about until we land at a male entertainment club.

There’s an immediate bond between the two, as well as a distinct unease that hangs in the air and helps drive the film. For a bigger payday, the two pile into a luxe van with Stefani’s hapless boyfriend Derrek (Nicholas Braun) and roommate X (Colman Domingo, finding his niche) to go dancing in the Sunshine State. Turns out that doesn’t pay so much either, and X is really Stefani’s pimp; this is all unbeknownst to Zola and Derrek, who’s left in a raunchy motel to stew.

Zola’s got a beau back home and has boundaries, and even though X menacingly forces her into a call, the film lets Zola steer her way to just helping garner Stefani better johns on certain blacklisted social media sites, upping the dollar value. Stefani’s all too happy to please and seemingly has no boundaries and limitless energy. Her justification, when pushed, is that she has to support a child back home. She also has masterful control over Derrek, who spends the night frantically calling and texting.

Things get increasingly dicey as another pimp circles, X seems ready to explode into violence and Derrek declines emotionally as he wakes to the harsh reality about Stefani he’s buried through denial, puppy dog love and doofus gullibility. Stefani knows just when to throw the dog a bone, though, and Zola is always there to reluctantly watch the carnal play. It’s also here in the middle of the film that the arc really has nowhere else to go. Guns and group sex don’t raise the stakes; the action has crested, and it feels like the filmmaker and writer Jeremy O. Harris (“Slave Play”) – working off King’s tweets – are happy enough to hang it all on the frenemy chemistry of their two leads. I get the why, but it’s not a very satisfying choice in the end.

That said, the two actresses do play off each other brilliantly. Paige (“White Boy Rick”) is the anchor and holds it all well, but the film is really Keough’s. It’s not a big surprise, as the granddaughter of Elvis has landed in similar roles before in Andrea Arnold’s envelope-pushing “American Honey” (2016) and the streaming series “The Girlfriend Experience,” with those notable turns feeling akin to research for this culmination. Looking like one of the robotic beauties from the “Neon Demon” (2016), Keough nails the white-wannabe-from-the-hood vernacular (think a subtler form of Gary Oldman in “True Romance”) and the race differential between the women only adds to the tension.

The important thing to bear in mind is that this is all based on King’s tweets; in follow-up stories, the “white bitch” known as Jess has said she turned no tricks, and it was Zola who was down for it. Ostensibly trying to give a nod to that, Bravo and Harris switch perspectives to let Stefani share some thoughts with us, but in the end what happened in those bedrooms happened. Since it doesn’t rescript the facts, this comes off as awkward and distracting, though the leads and Bravo’s stylish eye push the film above its narrative deficiencies with 16mm camera work by Ari Wegner – remember the name – that is vibrant and mood setting. “Zola” begins with all the dark, captivating allure of Nicolas Winding Refn’s “Neon Demon” and Harmony Korine’s wicked descent into Floridian fun-time hell, “Spring Breakers” (2013). It just doesn’t know how to finish, and simply ends when you think the big turn is just around the next bend.