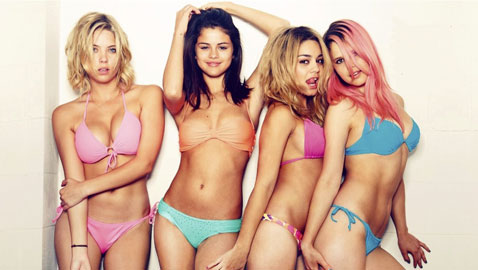 “Spring break forever” and “pretend it’s just like a video game” are just a few of the naive, saccharine-sweet platitudes that roll off the lips of a quartet of sexually budding coeds in Harmony Korine’s cautionary tale of innocence adulterated and gone grotesquely awry, “Spring Breakers.” By the end of the film, those flighty mantras expand and take on a prophetically deep meaning that their utterers and the audience could not have predicted or prepared for. It’s one of the many charms Korine imbues into the Day-Glo road trip to hell.

Much has been made of the film’s casting, which dips into the well of Disney and transforms girly icons Selena Gomez and Vanessa Hudgens into wanton purveyors of hedonism. This is Justin Bieber’s ex and the wholesome lead of “High School Musical” running around in bikinis, snorting coke and kissing other girls. But what else would one expect from the scripter of the enfant terrible eye-opener “Kids” and his subsequent turns as director of such psalms of sociopathy as “Gummo,” “Julien Donkey-Boy” and “Trash Humpers”?

The plot, which is thinner than a string bikini strap, has four college friends pining for Spring Break revelry without the cash to get there. But problems have solutions, and three of the four steal a professor’s El Camino and rob the local Chicken Shack. If the needle just skipped angrily across the vinyl and this seems implausible, the film does build up a hefty dose of claustrophobic ennui among the girls; by the time they take action it feels natural, like a dare that feeds on itself and grows. “Pretend like it’s a video game. Act like you’re in a movie or something.” And so it goes.

The scene is shot smartly from inside the cab of the El Camino (driven by Korine’s wife, Rachel) as it circles the restaurant slowly while two of the girls (Ashley Benton and Hudgens) don ski masks and, armed with a fake gun and mallet, ransack the place. From there it’s on to Tampa, where bare-chested babes ride the shoulders of sculpted Davids and down funnels of beer while swaying to the baritone rhymes of shirtless rappers with gilded teeth, tight cornrows and face-consuming shades.

In short, these stage-bopping demigods are about as inhuman-looking as a human can get, which is fitting, because one of the rappers goes by the handle Alien (James Franco giving his finest if not most indelible performance to date), and it’s Alien who keeps the dream of paradise alive by bailing out the girls after they’re arrested at a house party. Alien’s really a drug dealer, and he’s got the lifestyle down to a cliché with a beachside crib accented by a Liberace white piano poolside and an arsenal of guns that would make Tony Montana jealous. He’s even got “Scarface” on continual replay. 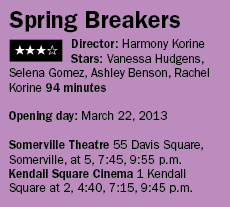 There’s an unease between Alien and the four, and he’s drawn to the one (Gomez) who is most wary of him. As time goes on, some of the girls opt out; the others jump in, full force. It’s quite a sight to see three of the girls in breast-cancer-pink ski masks and flimsy bikinis do a waltz with assault rifles as Alien taps out a Britney Spears’ tune on the piano. The film nearly becomes a PSA for gun control and the war on drugs.

“Spring Breakers” doesn’t have the realness of “Kids,” but it does have an edge that lies mostly in the girls’ outrageous character arc and Korine’s loose use of nonlinear storytelling. If it seems unlikely a vapid school girl would transform into a gun-toting vixen over a brief vacation break, just remember Patty Hearst. And remember Hudgens too; the whole cast is excellent, but this is Hudgens’ breakout and probably the most commercial film we’ll ever see from Korine. “Spring Break forever, bitches.”