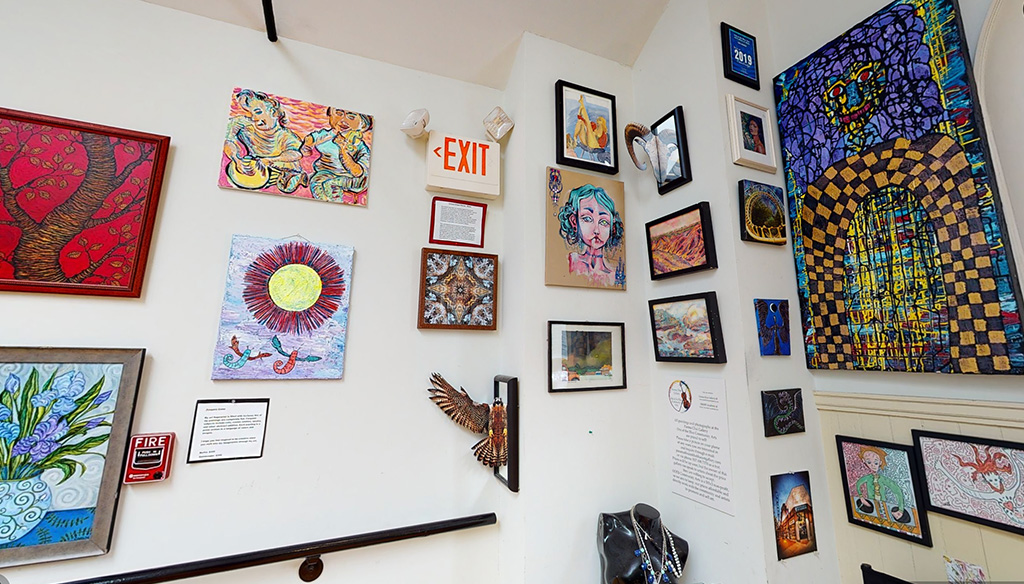 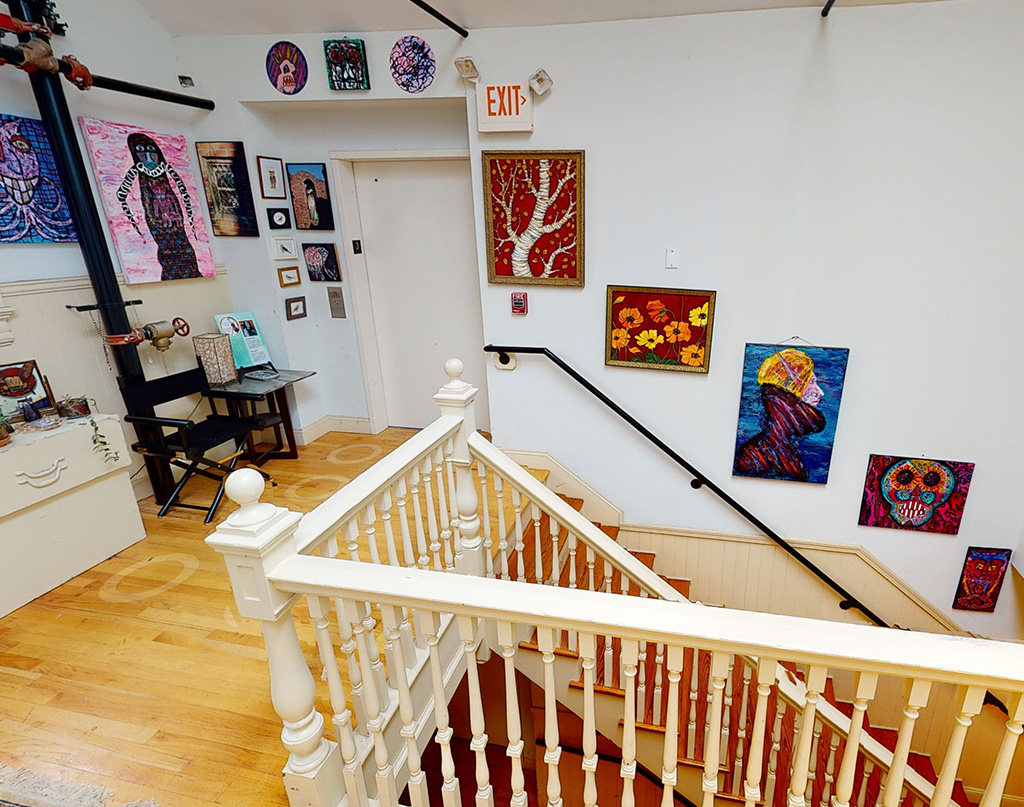 The Out of the Blue Art Gallery has placed art throughout the Armory building now owned by the city of Somerville. (Image: Tourit)

Despite assurances by a Somerville official that the city would work with tenants of its Armory arts building not “to dismantle [it but] to make it work,” leases were sent Thursday that suggests all will be homeless as of Dec. 31.

While tenants expressed hope that it was just a first step to be followed by a lease renegotiation process, several described a lack of communication that left them not knowing what to expect and, in the words of one who asked not to be named, “not sure what is true.”

Somerville took the building in May from Cambridge’s Sater family with a City Council-approved $5 million eminent domain land taking. The seizure was to “preserve the facility for arts uses” after hearing the Saters might convert the 191 Highland Ave. building to business uses amid money troubles brought on by pandemic lockdowns.

Tenants such as the Out of the Blue Art Gallery were concerned immediately that the city would evict them, if only for other artists with better connections among Somerville Arts Council members, but George Proakis, executive director of community development for Somerville, offered official assurances that “there’s incredibly interesting things going on in the Armory, and there’s no interest in changing the nature of that. Our goal is to figure out how to make that thrive.”

Still, on Thursday leases arrived at the Armory building telling tenants that whatever contracts under the Saters said, they could stay only until Dec. 31. Overstaying the lease would cost $300 a day, based on a copy of the lease provided by Out of the Blue’s Parama Chattopadhyay for review. Other tenants confirmed Friday that their leases were similar, including a clause barring subleases that might affect a sheet music business within the Acoustic Strings of New England rental service and at least one other office.

If there’s a legal clash over an Armory tenancy that causes the city to hire an attorney, it’s the tenant who “will pay the fee of such attorney, all court costs and constable charges,” according to the provided lease.

The new lease preempts one Chattopadhyay said she had with the Saters that ran for an additional two years, though it does not raise the amount that the gallery must pay monthly.

“No one knows what they’re doing”

There was no mention of renegotiations, Chattopadhyay said, and lengthy efforts to talk with Proakis, Somerville Arts Council executive director Gregory Jenkins and others had met with silence.

“I’ve been trying to connect with them for the last two months. I’ve given up,” Chattopadhyay said.

Another tenant said they expected that the lease was a precursor to a renegotiation process, possibly in September, that might be used to redefine who gets to rent. In the meantime, the building has not been cleaned or maintained, the tenant said, and no one at the city seems to be in charge or available to talk. “No one knows what they’re doing,” the tenant said.

A post on social media about the situation by Chattopadhyay drew considerable attention Thursday, including a reader’s call for Somerville Arts Council members to respond that went unheeded. An email sent through the city’s director of communications and community engagement, Denise Taylor, went unanswered Thursday and into Friday, when Taylor explained that City Hall business had been disrupted by severe weather warnings after a tropical storm threatened flash floods and even a tornado.

Art throughout the Armory

Tenants of the Armory building range from Dead Moon Audio to the poetry-focused Červená Barva Press we well as the Great Way Wellness Center and John Lavoie Training fitness studio. Out of the Blue moved into the Armory in February, seeming to find a permanent home after a 21-year run in Cambridge ended in 2017. Chattopadhyay is in a unique situation in the building as its sole live-work tenant – a situation she said was set up by the Saters with the idea that she would hang gallery art throughout the building.

“This was a very special thing for me. And I wanted to give back to the tenants that I love here,” Chattopadhyay said. “I’m so grateful. And now it’s just being thrown away.”

Art has been put up by Out of the Blue throughout much of the building for the first time in 16 years, as shown off in a 3D walkthrough by the company Tourit – actually a fly-through, as the company captured the four-story environment by sending drones hovering through rooms and up and down stairwells. The tour is here.

Arts communities in Cambridge and Somerville face challenges from the pandemic as well as from rising rents and the temptations of development profits in a rapidly gentrifying environment. More than 20 artist-tenants at Somerville’s Central Street Studios learned in mid-June that they will be displaced come Sept. 1 from their building, which has been studio space for some 35 years; the nonprofit makerspace Artisan’s Asylum closes Aug. 31 on Somerville’s Tyler Street for a move to Harvard property in Allston-Brighton. Somerville Arts Council officials say they are also worried about the Vernon Street Studios and Joy Street Artists Studios, artist Bethany Noël said in July.

Chattopadhyay seemed at times Thursday to be both angry and resigned about the uncertainty facing her and the gallery.

“I have no stupid ideas in my mind that I can definitely stay here. The city can do what they want,” Chattopadhyay said. But she also said she was talking with a lawyer who was fired up about getting back the money she has invested in moving herself and the gallery into the building, where she expected at least two more years of residence.