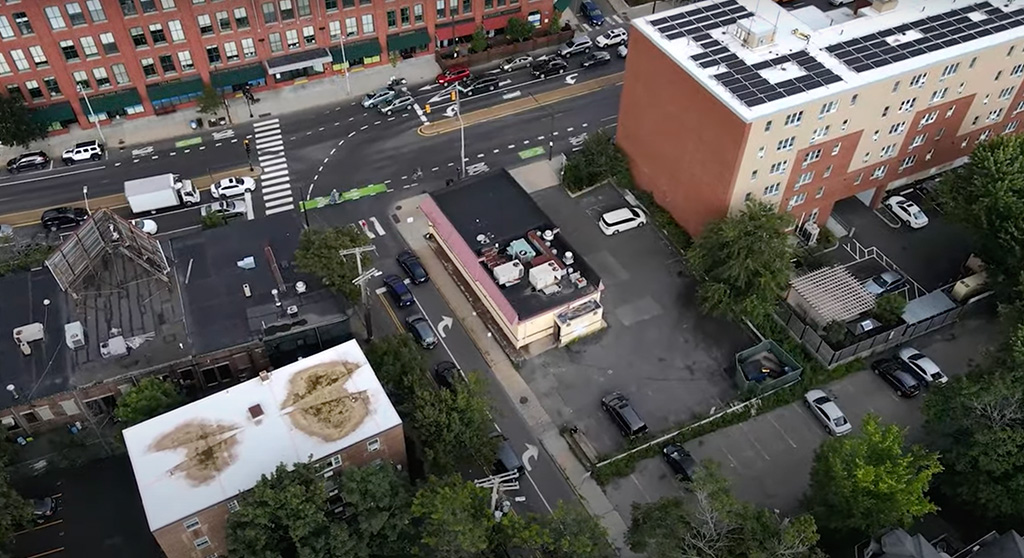 Drone footage from a video opposing an affordable-housing proposal near Porter Square shows the site’s current use – a one-story restaurant and parking lot.

The affordable housing project at 2072 Massachusetts Ave., North Cambridge, was withdrawn by developers Friday in a letter to the Board of Zoning Appeal.

The project near Porter Square, which is scheduled for a continued public hearing at the board on Sept. 9, has drawn opposition from neighbors concerned about a range of issues, including its height, which reached as high as nine stories on Massachusetts Avenue but had a lower section as it stretched back on Walden Street. The potential height and number of units varied during discussions with officials and neighbors but could have provided as many as 49 affordable units, many of them intended for families.

The announced withdrawal is to “allow the applicant and project team the time to respond to BZA and community feedback while also safeguarding the project’s significant benefits,” the letter said.

The developers are Capstone Communities and Hope Real Estate Enterprises, led by Jason Korb and Sean Hope, respectively. Korb said Friday by phone that they remain “100 percent committed to building an affordable housing project on that site. At this point, I can’t give you any details, because I don’t know any details.”

The letter points to “confusion” that resulted from the two kinds of permitting available for the site, which now holds a one-story restaurant called Darul Kabab and its L-shaped parking lot.

“Because of the misunderstanding,” the letter says, “the applicant is compelled to withdraw its pending application to protect the public benefits of the project.”

The letter drew objections from at least one resident. Young Kim, of Norris Street, felt its claim that developers had “spent years engaging with the community and stakeholders” was misleading, considering that even their own website noted that the first community engagement came Sept. 29 – a little less than 11 months ago.

The Affordable Housing Overlay won approval from the City Council on Oct. 5, so it wasn’t an available option when the developers began designing the project. “There was absolutely no confusion,” Kim said, citing the language of the letter. “AHO was not yet adopted and therefore was not available to them when they started the project.” He also said there were various ways that the process violated the laws around 40B.

Kim also scoffed at the letter’s claims of needing more time. “They could have simply asked for another continuation,” he said.

Before the Affordable Housing Overlay was finalized and ordained, the developers applied for a so-called comprehensive permit under Chapter 40B, the state’s “anti-snob zoning law,” which let them seek all needed discretionary permits from a single local entity – the Board of Zoning Appeal – in a one-stop-shopping exercise. (In communities that have less than than 10 percent of affordable housing overall, 40B gives developers special financial arguments and appeal rights in the event of a denial. But because Cambridge is above the state threshold, 40B serves to reduce administrative hurdles.)

Under the Affordable Housing Overlay, “the largest affordable housing family project that could be delivered at this site would be approximately 30 units, which would be 38 percent less than what the project could deliver … through the comprehensive permit process,” the letter says. When the developers studied a scaled-down version of the project under under the AHO, they “found it to be financially infeasible.”

Asked about a possible path forward on the site, Korb said Friday: “We don’t know. I wish I had a better answer for you. I think the letter speaks for itself.”

The project was pitched initially in September as a uniform eight stories but was revised to drop the rear of the building on Walden Street to six stories while simultaneously raising the Massachusetts Avenue portion to nine. Lower versions were considered as well over the months.

A four-hour zoning board hearing in May included a 4-1 rejection of a set of conditions proposed for attachment to the project’s requested comprehensive permit. Board member Jim Monteverde suggested during the meeting that the building should be no higher than would be allowed under the Affordable Housing Overlay, roughly seven stories.

Most objections to the project voiced at the hearing related to the proposal’s limited off-street parking – three accessible parking spaces and two time-limited loading spots – and the potential for the building’s residents to park on neighborhood streets. The high-rise tower’s impact on the neighboring Leonard J. Russell Apartments, run by the Cambridge Housing Authority to house seniors and disabled people, was another concern.

“The project was just too tall,” city councillor and architect Dennis Carlone said in a video released Tuesday by opponents of the project.

Those opponents were relieved by the outcome Friday, with nearby resident Merry White saying by email that she was “lifting a cold beer to the better affordable building that’s going to be there.”

Height at 2072 Mass. Ave. project again rejected by zoning board; project to return in September