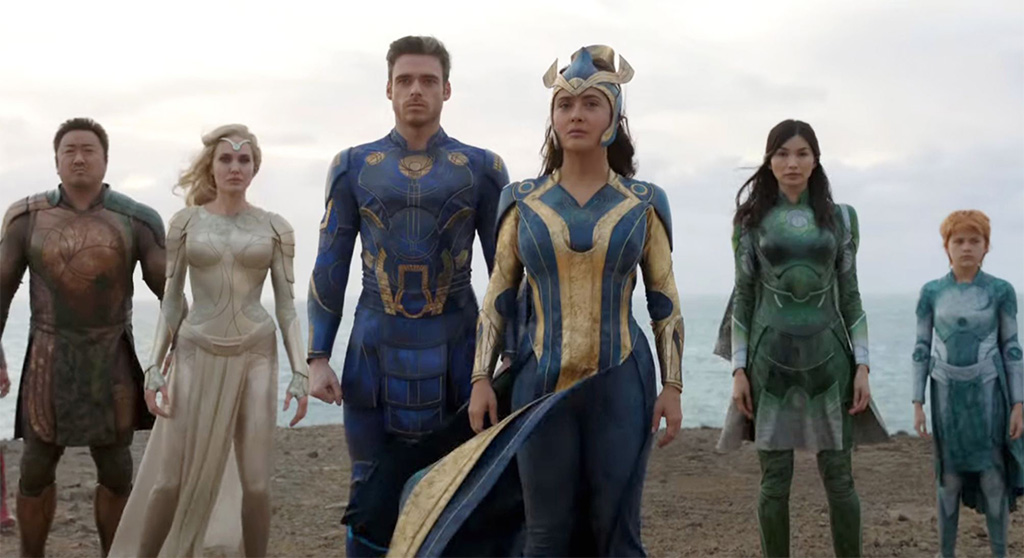 And so the Marvel Cinematic Universe expands in a way it hasn’t since 2014’s “Guardians of the Galaxy,” when joyous, self-deprecating humor propelled a merry band of misfits across the stars on their mission to save a star system. That goal has been a thing in any MCU chapter. It’s how it gets dressed up that’s key to the film’s success. In “Eternals,” directed by recent Academy Award-winner Chloé Zhao (“Nomadland”) we get a whole new slate of superheroes, notably diverse (it’s a multiracial lot, with one gay hero, one who is deaf and another battling metal illness) but suited up in unis that have to be some of the most generic, least-inspired Lycra designs in decades. The depth of character too is slight, and the CGI effects don’t really break any ground – and occasionally look “Sharknado” cheesy.

The Eternals of the title are a race of immortal superhumans created eons ago by the Celestials to protect planets such as Earth against ravenous entities known as Deviants. What the what? Yeah, there’s a lot in those big bland tags, barely a notch above Decepticons and Autobots, but Celestials are universe-forming gargantuans akin to the Titans in Greek mythology (Thanos and Ego from earlier MCU chapters are similar in powers and scope), while Deviants are hellish beasties that look a lot like the Taotie from the 2016 Zhang Yimou miscue “The Great Wall,” a hybrid of wolf and dinosaur stripped down to sinew and bone and equipped with flowing tentacles that allow them to sap the energy of their target. Eternals wiped out all the Deviants in the early days of civilization and now hang among us, awaiting their next call to duty.

Keeping with that lazy borrowing of classic mythos, we catch up with the Eternal Sersi (Gemma Chan) posing as a London museum curator and involved with a mortal named Dane (Kit Harington). She used to be married to Eternal alpha stud Ikaris (Richard Madden), but they drifted apart and haven’t seen each other in centuries – until one day, or one date night with Dane, a deviant crawls out of the Thames and Ikaris drops in out of the blue to help Sersi thwart the malevolent with his laser-beam eyes and square-jawed bravado. One might imagine there’d be some kind of intimate pause here, a “Dane, meet my ex” and perhaps some edgy love triangle dynamics (“Is he super good in bed too?”), but no, bigger MCU matters abound: Why are these things back, and what is Sersi to do?

To get answers, Sersi tries to reach out to Ajak (Salma Hayek), the leader of the Eternals and the only one of the Earth clan who can commune with the Celestials. Getting in touch with Ajak proves to be a complicated matter, so Sersi sets out on globe-spanning mission to reassemble the team and snap them back into deviant-busting mode. Along the way we meet some interesting sorts: Sprite (Lia McHugh), an illusionist stuck in an androgynous tweener’s bod, Kingo (Kumail Nanjiani, “The Big Sick”), making Bollywood films and the posse’s much needed comic relief, and Druig (Barry Keoghan), living as a god among the indigenous people of the Amazon. They’re all fairly one-note but more interesting and deeper than Ikaris, who’s pretty much a blanched-out, watered-down version of The Homelander from the comic book and television show “The Boys.” Better is Thena (Angelina Jolie), a super warrior with a Blanche DuBois complex. During bouts of delusion she’ll lash out occasionally at a random colleague with one of her lightning-etched weapons; thankfully she’s under the eye of group strongman Gilgamesh (Don Lee), who knows how to apply a calming hand. The most robust Eternal is Phastos (Bryan Tyree Henry), whose superpower is to create technology and weapons. What makes him stand out is his innate humanity: In a flashback, we witness him so outraged over his role in helping develop the A-bomb and the subsequent obliteration of Hiroshima that he refuses to use his powers in the human balance anymore and, like Sersi, embeds deeply with the mortals, marrying and bringing a child into the world. The portrait of family life is the most anchoring aspect of the film, and the film’s secret superpower, most notably unleashed when Phastos gives Ben, his partner, an “off to save the world” smooch. It’s seamless and natural, and anyone thinking otherwise is likely a card-carrying member of the Proud Boys. That said, The Homelander and Ikaris may just be.

Too many themes get parboiled in “Eternals”: creationism (think “Blade Runner” and Frankenstein), the notion of an altruistic greater good (that may not be so good, depending where you stand) and supreme beings above moral reproach, to name a few. They’re meaty matters but, like the Eternals themselves, are just surface scratches that never draw blood. Chan, so vulnerable and lending such depth to her wronged wife in “Crazy Rich Asians” (2018), is asked to yoke a heavy load as the lead. She’s up to the task, but the obstructions of the MCU allow for little interest in Sersi’s soul; it’s an amazing miss for a script co-written by Zhao, who made her name with deeply real – in fact, neo-realistic – portraits of people seeking light amid personal woes (“Songs My Brother Taught Me” and “The Rider,” along with “Nomadland”). Taika Waititi, whose career trajectory is similar to Zhao’s (“What We Do in the Shadows” and “Hunt for the Wilderpeople”), scored well with his 2017 outing “Thor: Ragnarok.” His dark wit went far to elevate that film above the usual MCU trappings, and he promptly returned to more provocative, tightly focused fare with “Jojo Rabbit” (2019). Zhao may take a ding on this one, but she’s still got that Oscar, and this paycheck should seed a few small-scale endeavors of her own choosing.