Moving forward together on Mass. Ave. 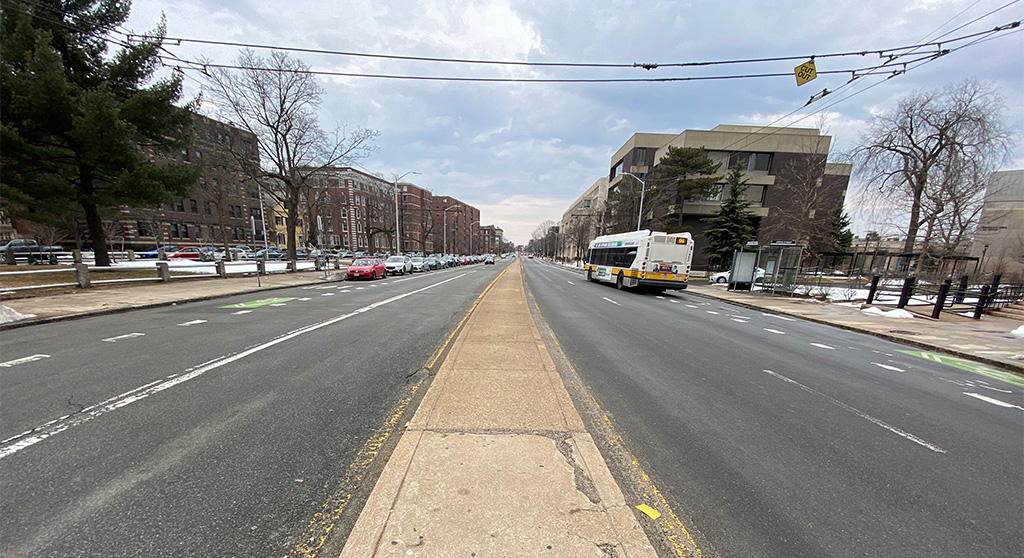 Moving forward together on Mass. Ave.

Our streets are not wide enough to do all the things we would like to do – but changes still need to be made, city councillors say.

Many residents have reached out to share their thoughts and concerns about planned changes in Porter Square. While it may seem that there is no common ground, those who are concerned about potential impacts to local businesses or neighborhood streets agree on many things with residents who support the implementation of protected bike lanes. One central theme we have heard from nearly all residents is that they want our streets to be safe for those who walk and bike, and that the design should consider the interests of all stakeholders along the corridor. We agree.

In 2019, the council passed the Cycling Safety Ordinance to build out the Cambridge Bike Network within about seven years, adding dedicated bike lanes to many roads in the Cambridge Bike Plan. Timelines were added in 2020 that include changes to Massachusetts Avenue and other dangerous routes. Although this involves changing the status quo, we support this plan because we believe that our streets are not as safe or comfortable to use as they should be. More people are walking and cycling, and we have an obligation to make sure they can do so safely. We also understand that we need to reduce potential negative impacts from these changes as they arise, including those to small businesses.

As often happens when discussing topics that elicit strong feelings, there is a great deal of information being shared. We would like to provide you with additional details in the hopes that our discussion can be better informed. There are three conversations taking place that are adding to some of the confusion. 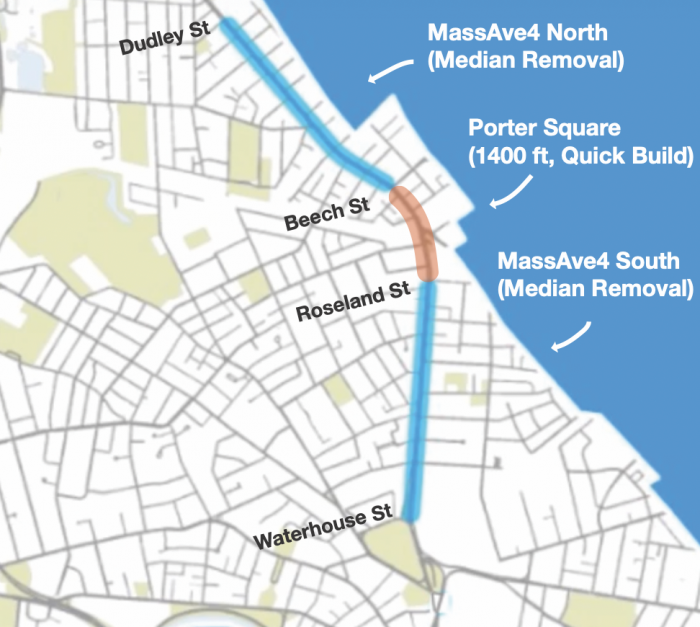 This took place on the section of Massachusetts Avenue between Route 16 and Dudley Street. This section was slated to be a “quick build” project, which means that no physical changes are made to the curbs or road surface aside from paint and bollards. Metered spaces were removed and put on adjacent side streets; an expanded loading zone for commercial use (30 minutes at a time) and short-term personal parking (15 minutes at a time) was added between 9 a.m. and 10 p.m. Upon hearing concerns from local businesses, the city put in additional metered spaces along adjacent streets and is now looking to expand the times allowed for loading-zone parking, improve signage and rent parking spaces in privately owned lots. We believe this project has been considerably improved by the recent changes, and that additional updates will continue to alleviate concerns.

This one, which has the tightest timeline, involves the Porter Square intersection along Massachusetts Avenue between Beech and Roseland streets, covering 700 feet in each direction. This is another quick-build project, and will be completed by the end of this construction season. This project will also likely move a substantial number of metered parking spaces onto adjacent streets next to commercial areas. The city is also looking at renting parking spaces in privately owned lots along this stretch. We believe this project is small but important to address urgently, as Porter Square is a challenging and dangerous intersection for all road users.

This involves two longer stretches of Massachusetts Avenue between Roseland and Waterhouse streets and Beech and Dudley streets – 1.25 miles in total. Importantly, the most likely plan will preserve a great deal of existing parking. Any parking changes will not begin for at least a year, after a thorough community design process. At the most recent project meeting on March 3, city staff outlined three possible options:

For the much larger portions of Massachusetts Avenue next to Porter Square, we support the city’s preferred option of a partial build. It is a balanced solution that got an overwhelming amount of public support at a recent meeting. Retaining a substantial amount of parking will reduce impacts to businesses and neighbors, allowing meters to be placed along 100 feet of commercially zoned frontage on adjacent side streets. While this approach will take considerably longer than a quick-build project, it ultimately will reflect the many needs of all road users, including small businesses, neighbors and those who walk, bike or take transit.

The MBTA’s overhead catenary wires have created challenges, but changes to the electric bus fleet means the wires will be de-electrified and removed in time for this project. City staff are meeting regularly with the state to coordinate the removal of these lines, and we have encouraged the city to move expeditiously – and even help pay for their removal.

We know this process has resulted in a great deal of consternation in the community and know there have been many strong feelings. These are challenging problems we are trying to solve. Quite simply, our streets are not wide enough to do all the things we would like to do. Given that road changes need to be made, the question is how we make those changes in a way that minimizes impacts to businesses while ensuring that the streets meet modern design and safety standards.

We would like to thank the staff at Traffic, Parking and Transportation, Public Works and Community Development who are working hard on resolving these issues. We encourage everyone to continue to take part in this discussion, but to do so in a respectful and forward-thinking way. The city has a great deal of information about the projects along Massachusetts Avenue and the Porter Square intersection that can answer many of your questions. Thank you to the hundreds of people who have commented and shared their thoughts. Let’s work together to reach a solution that works for all members of our community.