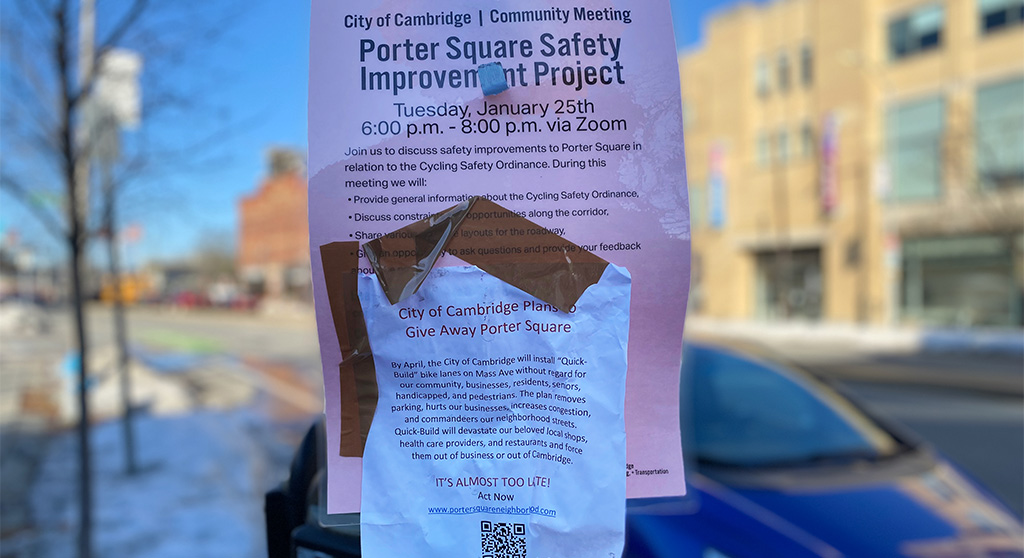 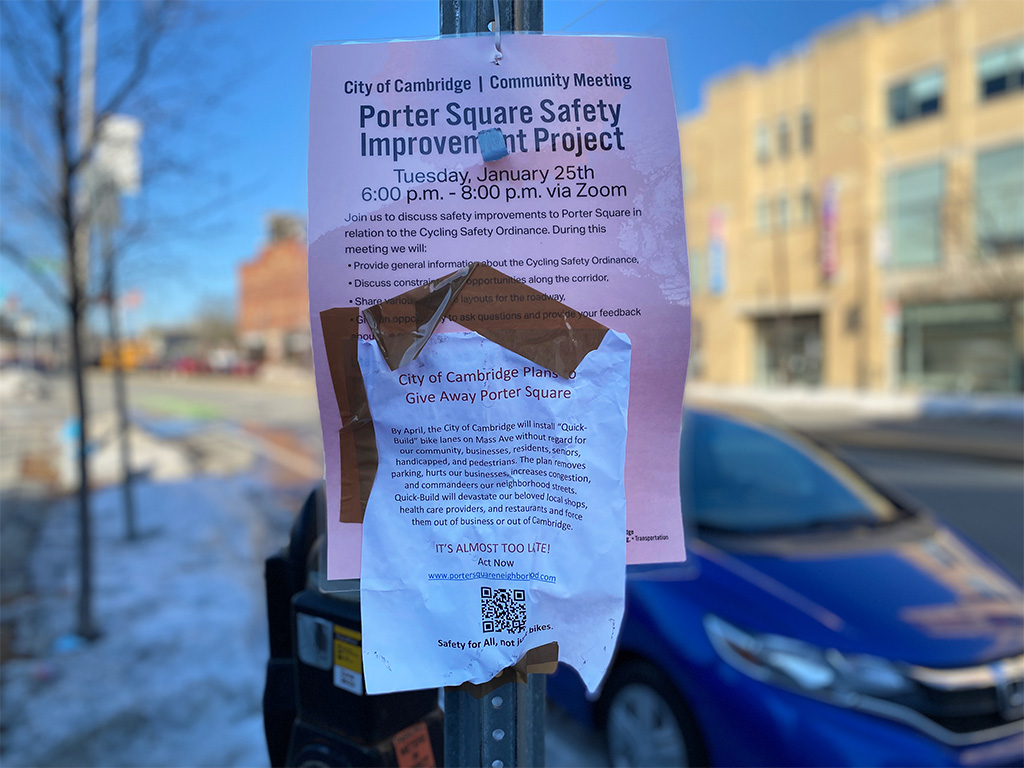 A sign taped to a municipal meeting notice warns that the city plans to “give away” Porter Square with quick-build bike lanes. Unlike with many websites, the URL on the flyer works only when https:// precedes it. (Photo: Marc Levy)

Transportation officials are moving toward removing overhead trolley wires that will allow an approach to building bike lanes that keeps more parking along Massachusetts Avenue in the northern parts of the city, representatives for the city and state said in two community meetings this week.

The MBTA held an information session virtually Tuesday on bus electrification and the North Cambridge depot redesign, drawing more than 150 attendees. Scott Hamwey, the MBTA’s director of bus modernization, said the state planned to de-electrify overhead catenary wires and switch to battery electric buses beginning in mid-March, removing the wires sometime in late 2023 or 2024. The North Cambridge depot would shut down for two years as it was turned into a bus-charging station; construction would start within the next year, Hamwey said. While just 3 percent of the fleet is electric now, the agency plans to make it fully electric by 2040.

Many in the audience argued that the current, wired buses were cleaner than the BEBs, which would be equipped with a small diesel engine cycling on and off to add warmth for riders on days cold enough that the buses’ electric heat is inadequate. The rebuilt depot would include a 5,000-gallon diesel tank on the north side of the site.

Only a small amount of the bus fleet use the overhead wires, which are deployed in only a small part of MBTA territory, and the system and buses that use it are aging and will require significant cost to upgrade and maintain, said Hamwey and senior director of vehicle engineering Bill Wolfgang. 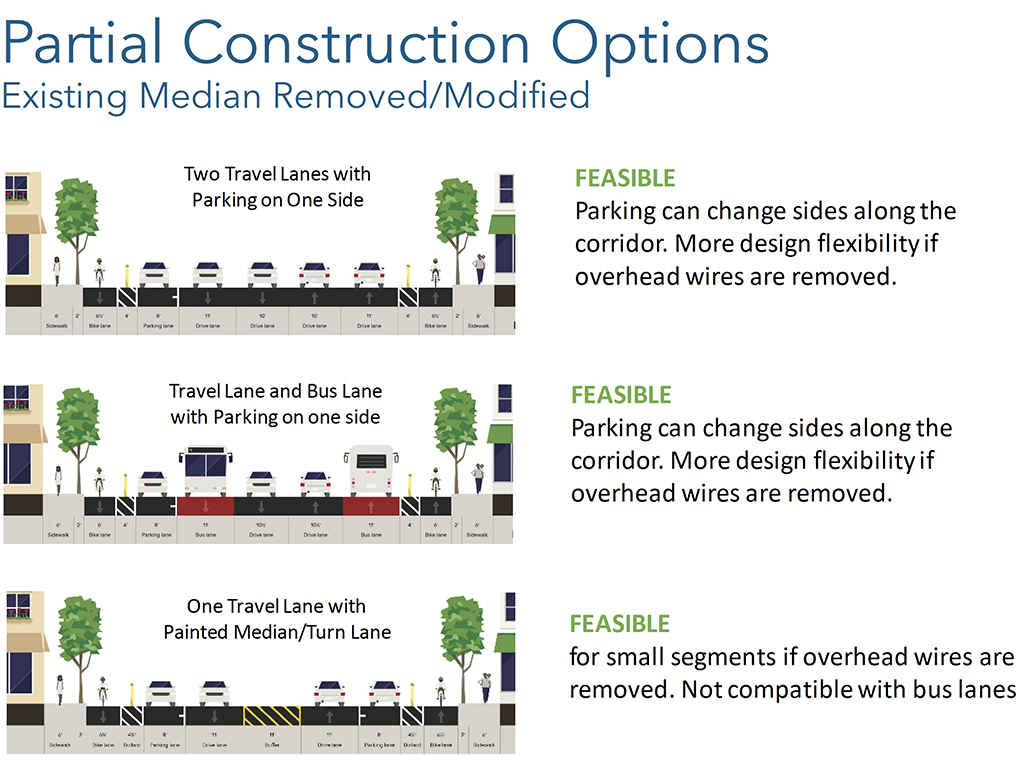 The city showed “partial” bike-lane constructions options as part of a Wednesday presentation.

The catenary wires’ removal also would free up road planning solutions in Porter Square, possibilities outlined Wednesday in a joint meeting of the city manager-appointed pedestrian, transit and bicycle advisory committees. The meeting drew 28 members of the three committees and 86 members of the public.

Diane Stokes, a senior engineer with the city’s Department of Public Works, and Rosie Jaswal, a senior engineering consultant from Toole Design Group, ran through the Porter Square design options, from a quick-build that would keep few parking spaces to a full reconstruction that could preserve much of the current parking capacity.

The issue with full reconstruction, Stokes said, was having to coordinate with utility and water agencies and telecommunications companies with underground infrastructure. A project that big “can take over 10 years from start to finish,” she said.

The middle ground laid out was partial reconstruction, which would be changed by the wires coming down and removal of the Massachusetts Avenue median, with a timeline Syokes called “somewhere between quick-build and full reconstruction.” In her presentation, the partial construction options allotted for maintaining about half of the current parking capacity along the corridor. Andreas Wolfe, a city street design project manager, said that could be a mix of parking and loading zones; all parking designated for people with physical disabilities would be maintained and potentially increased, he said.

Another factor to partial reconstruction: water and gas mains beneath Porter that are more than 100 years old that will be affected by the work. “If you have an old gas main or an old water main that’s made of a certain type of material, just the vibrations from the activity could cause some problems,” Stokes said. “Does all of Mass. Ave. need to be reconstructed at some point? Absolutely. But we don’t want to propose that now.”

Under the city law, the two segments of bike lane construction discussed on Wednesday – the other two segments are down in Harvard Square, around Dunster and Church streets – must be quick-build or get a council-approved construction timeline by the end of April.

Members of Cambridge Bicycle Safety, the bloc of advocates behind the cycling law, said they liked the partial construction option, but embraced it with caution. “Due to the urgency of making safety improvements along all of Mass. Ave., it is critically important for the city to scope a project that can happen in the next couple of years, not four or five or more years from now,” said Nate Fillmore, one of the group’s founding members.

Bike advocates contacted since the meetings were generally enthusiastic about what lies ahead.

“It felt from this presentation like there are some pretty good possibilities for better bike lanes and bus lanes while also providing some parking. They also have a longer timeline, which will hopefully help the community feel like they get to be heard. I hope that makes everyone more amenable to the project,” said Nathaniel Smith, a King Street resident. Itamar Turner-Trauring, of Oxford Street, said he was “happy they’re pushing for the middle option, since that allows for both parking and bike lanes and bus lanes.”

Former city councillor Craig Kelley, though, saw getting rid of the safety median without a plan to avoid cross traffic and U-turns as a “horrible idea.” After removing a chunk of median a few years ago by Cogswell Avenue, the city had to replace most of it because cars were turning too quickly onto Russell Street from Massachusetts Avenue southbound. “Drivers could only make those fast and dangerous turns because the removal of the safety island allowed them to cut the turn earlier. As a cyclist, I felt I was in the crosshairs,” Kelley said.

During the meeting, comments appeared in favor of protecting parking and wary of change. Attempts to contact those more cautious or skeptical about bike lane plans were unsuccessful. Emails were sent Thursday to Porter Square Neighbors Association leadership and citizen groups called Mass Ave. 4 All and Save Mass Ave that formed in response to the plans. But by Friday evening, there were no responses. A few members of the PSNA responded, mostly in support of the plan. Kelley was the dissenter.

At the heart of the matter lies the city’s Bike Safety Ordinance, passed in 2019 and amended in 2020, requiring the installation of more than 26 miles of protected bike lanes throughout Cambridge, including the entirety of Massachusetts Avenue, by 2024. Much of its lower stretch, from Harvard Square to the Charles River, has been completed without removing significant amounts of parking; the main challenge for stretches of what’s labeled the MassAve4 for planning purposes (Waterhouse Street to Roseland Street, and Beech to Dudley Street) has been the median and catenary wires that power two bus lines from Harvard Square to the MBTA bus layover depot at Dudley Street.

An impact analysis released by the city in April kicked off a firestorm by suggesting that in installing quick-build bike lanes – which separate bikes from cars without construction by putting in flex posts, signs and road paint – it wouldn’t be possible to do a parking shift that put cars to the left of a new lane, forming a barrier against motor vehicle traffic. Instead, the removal of parking was likely needed. Citizen groups called Mass Ave. 4 All and Save Mass Ave formed in response.

Fears were further stoked in November, when more than 70 parking spaces were removed in North Cambridge to install a quick-build lane – not part of the MassAve4 – along the one-mile stretch from Dudley Street to Alewife Brook Parkway. Some businesses said the loss of parking could be fatal to them.

The Porter Square Safety Improvement Project reviewed Wednesday was the same as during a community meeting Jan. 25: a quick-build solution losing roughly 30 parking spaces on the avenue but with metered spots possibly added on side streets like in North Cambridge. The prospect of making traffic on Upland Street one-way to add parking drew attention, but most committee members opposed a change.

This story was updated Feb. 19, 2022, to clarify that Porter Square Neighbors Association members responded to a request to comment about the week’s community meeting proposals, though leadership did not. It was updated Feb. 20, 2022, to show how a URL in a photo can be made to work.