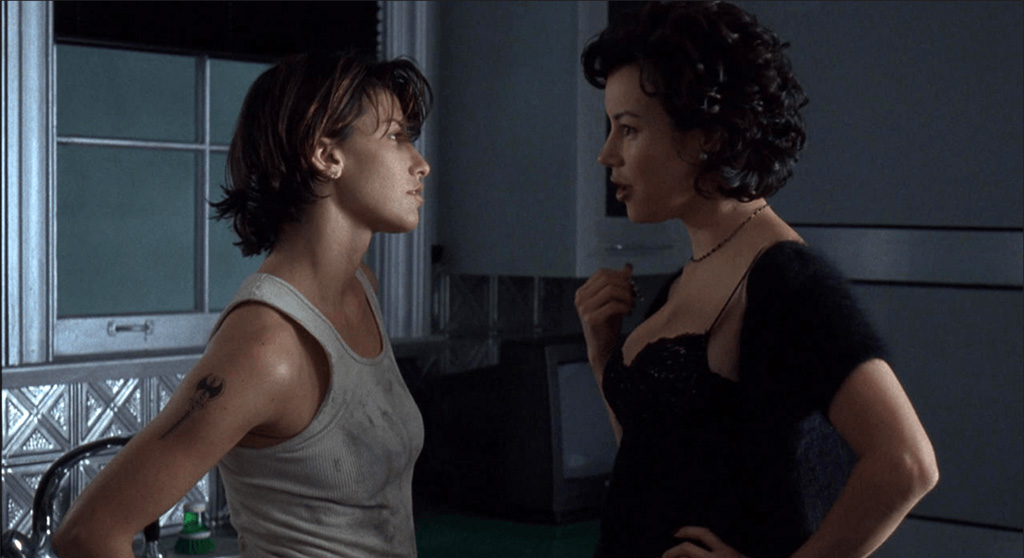 Aptly for Pride Month, “The Pop-Art Cinema of the Wachowski Sisters” continues this week at The Brattle Theater with the time-weaving adaptation of David Mitchell’s bestselling sci-fi novel “Cloud Atlas” (2012, Monday), co-directed by Tom Tykwer of the time-manipulating “Run Lola Run” (1998) and starring Tom Hanks, Halle Berry, Hugo Weaving, Jim Broadbent and Jim Sturgess (many in multiple roles, some with gobs of makeup that make it hard to discern who they are). Also on tap is their 2015 space curio “Jupiter Ascending” (Thursday) and the big-screen blow-up of the 1960s cartoon “Speed Racer” (2008, Tuesday). The most spot-on selection for Pride Month, however, comes Wednesday in the brothers’ first directorial feature, “Bound” (1996, before which they had pretty much just been the scribes of the 1995 Sylvester Stallone and Antonio Banderas thriller “Assassins”). It pairs a breathy moll (Jennifer Tilly) with a just-out-of-jail lesbian (Gina Gershon). The chemistry between the two, the noir-ish ambiance and scenes of erotic entanglement – including one of the best first kisses on screen ever – are hard to top. Joe Pantoliano is in the mix as the small-time mobster with big ambitions but unaware his gal (Tilly) is stepping out on him with the handyperson remodeling the apartment next door (Gershon).

Speaking of noir, The Brattle launches “Noir City” this week in conjunction with the Film Noir Foundation, featuring rarities that have been rescued and restored – some never screening before at the theater. This week’s slate includes Jerry Hopper’s “Naked Alibi” (1954, Friday), starring Gene Barry, Gloria Grahame and noir stalwart Sterling Hayden; the 1949 version of “The Great Gatsby” with Alan Ladd (“Shane”); and two from John Farrow (Mia’s dad) in “Night Has a Thousand Eyes” (1948) starring Edward G. Robinson and “Alias Nick Beal” (1949). All three play Saturday. On Sunday, it’s “Too Late for Tears” (1949) and Ann Sheridan (“Kings Row,” “They Made Me a Criminal”) in “Woman on the Run” (1950). (Tom Meek)

Can’t make it to Italy this summer? “The Complete Federico Fellini” series at the Harvard Film Archive from Friday through Aug. 15 might be the next best thing. A consummate showman and ringmaster of his own cinematic circus, Fellini (Il grande maestro, if you will) made 24 films over a 40-year career. Almost all of his orchestrated endeavors of comedic chaos were shot on Cinecittà’s now legendary Stage 5 studio just outside Rome.

Series highlights include “Amarcord” (1973, playing Aug. 7 and 15), Fellini’s joyous reminiscence of his adolescence in the Adriatic seaside town of Rimini. The title’s taken from the region’s vernacular expression a m’arcôrd (“I remember”). “Roma” (1972, July 25 and 29), Fellini’s genre-busting fictional documentary about his adoptive city, tells of the young director’s early days in the Italian capital. The film’s most famous sequence, a liturgical fashion show, features a catwalk with increasingly kitschy and outré papal outfits modeled by aging clerics.

Fellini’s wife and occasional muse (it’s complicated) Giulietta Masina appeared in five of the director’s films, most notably “La Strada” (1954, June 12 and 18), in which she played the delicate and fragile Gesolmina, a member of itinerant street performer troupe who suffers the slings and arrows of strongman Zampanò (Anthony Quinn). In “Nights of Cabiria” (1957, June 12 and 24) she plays a prostitute living in Rome looking for love in all the wrong places who gets conned out of her life’s savings. And then there’s Fellini’s valentine to Masina, “Juliet of the Spirits” (1965, July 3 and 9), which chronicles the travails of a middle-aged woman trying to emancipate herself from her unfaithful husband. In “Ginger & Fred” (1986, Aug. 8), Masina and longtime Fellini alter ego Marcello Mastroianni depict aging ballroom dancers modeled after Astaire and Rogers and caught up in a gaudy television empire. Charlie Chaplin once confessed that of all filmdom’s stars it was Masina who touched him the most. And it’s no wonder – there’s a Chaplinesque bittersweetness to be found in many of Fellini’s works, which at their core bear the conflict between selfishness and generosity, cruelty and love. But Fellini was allergic to labels (“Tags are for suitcases,” he once quipped) and relentless in his pursuit of originality.

Working with the droll, handsome Mastroianni, Fellini crafted his two most critically renowned films, which would ensure his place in the canon of cinematic greatness: “La Dolce Vita” (1960, June 11 and 17) and “8½” (1963, June 26 and July 1). That earlier effort, which pretty much made “the paparazzi” a thing, was a love letter to and an indictment of Rome’s glitterati as seen though the eyes of a tabloid journalist. Anita Ekberg’s scene with Mastroianni in the Trevi Fountain blends passion, lust and decadence into a single metaphorical moment that mirrored Rome’s culture of debauched excess of the time. In the film’s closing scene, Mastroianni’s disillusioned gossip columnist catches a glimpse of hope and redemption in the face of a young and innocent girl. Fellini often ends his films by the sea, and “La Dolce Vita” is perhaps his finest example.

Acknowledged as Fellini’s capolavoro, or masterpiece, “8½” is at once an introspective auteur film and a groundbreaking experiment in cinematic form. It remains the quintessential movie about making a movie, with Mastroianni playing Guido Anselmi, a director working on his ninth film (hence the film’s title) but stuck in creative limbo. Neither his estranged wife (Anouk Aimee) nor his mistress (Sandra Milo) can help. His producers are impatient, aspiring actors accost him and beg for work and the press wants to know what the film is about, but poor Guido can’t help anyone, much less himself. It may be cinema’s greatest sleight of hand, as we are watching the very film Guido claims he is unable to make.

If you’ve never seen a Fellini film, they’re lush, surreal three-layer cakes, filled with profound meditations on the human comedy. His vision was so original and unique it defied categorization, but then again, as il maestro liked to say, “Do the critics have to understand my films? Isn’t it enough that the public enjoys them?” All of Fellini’s films will be exhibited during the program. (Federico Muchnik)

The penultimate crime drama double shot from the “Hard Boiled Double Features” series at the Somerville Theater serves up two 1975 releases Wednesday about internally struggling investigators, weary and longing for a human connection while tasked with unburdening others. First up it’s Gene Hackman as a private gumshoe looking for a lost daughter (a very young Melanie Griffith) in Arthur Penn’s “Night Moves,” then Robert Aldrich’s “Hustle” with Burt Reynolds as a detective urged by a grieving father to investigate the suspicious circumstances surrounding his daughter’s alleged suicide. For Penn, “Night Moves” marked a very different crime picture in tenor and tone from his dark, bawdy “Bonnie and Clyde” (1967), the film that lit the way for the great New Hollywood movement of the late ’60s and ’70s – which many say fizzled out with the advent of the blockbuster (“Jaws” and “Star Wars”) and post-Watergate malaise, making “Night Moves” a fitting bookend to an era.

At the time of its release, one of the most eye-popping aspects of “Hustle” was the pairing of Reynolds with revered French actress Catherine Deneuve (in her second English-language film) as his love interest – a high-class escort in whose arms he seeks comfort. Reynolds had proven himself extremely bankable at the time with “The Longest Yard” (1974, also directed by Aldrich),“White Lightning” (1973) and “Deliverance” (1972) recently registered on his CV, but “Hustle” was indifferently received critically and commercially. The film’s tagline, “They’re Hot,” belied the film’s tense emotional undercurrent – yes, they are extremely attractive humans captured by Aldrich’s lens, but the film is much more than that and subtly tapped into the milieu of the Nixon era. The incredible cast included “Wild Bunch” actors Ben Johnson and Ernest Borgnine, Eddie Albert, Ellen Brennan, Paul Winfield as Reynolds’s partner and a young Robert Englund (Freddy Krueger) as a punk hood and plot changer. It’s also important to recognize Aldrich’s impressive repertoire: “The Dirty Dozen” (1967), “The Killing of Sister George” (1968), “What Ever Happen to Baby Jane” (1962) and “Kiss Me Deadly” (1955) are among his many great accomplishments, a body of work that goes largely, sadly unnoticed.

Also this week the Somerville Theater screens several classics in the big-screen form intended by the filmmakers. Screening Monday and Tuesday is “Zulu” (1964), the dramatization of an 1879 siege in the Anglo-Zulu war in which 150 British soldiers were pitted against 4,000 Zulu warriors. The “300”-esque film made a star of Michael Caine, a relative unknown at the time. Hitchcock’s “Vertigo” (1958), which should only be seen on a 70 mm big screen, and Alain Resnais’ French New Wave staple “Last Year at Marienbad” (1961) – his follow-up to “Hiroshima Mon Amour” (1959) – play Thursday. Then things get all Tarantino with “The Hateful Eight” (2015) and “Once Upon a Time … In Hollywood” (2019) over the weekend. QT’s western version of “Reservoir Dogs” (1992), which finally won composer Ennio Morricone an Oscar after all his indelible work with Sergio Leone, was shot on 70 mm with an Ultra Panavision lens (a format not used since the late ’60s), and Tarantino dictated that for the first two weeks of its release it be shown only on 70 mm projectors with a Panavision lens. Know how many theaters in the United States were even close to accommodating that? Twelve, with two being here: the Somerville and Coolidge Corner theaters. So it’s fitting that the Somerville is again showing the film in its designated format; the widescreen shot 40 minutes in of a stagecoach outrunning a massive, valley-consuming snow squall is daunting. And of course, “Hollywood,” Tarantino’s best history-manipulation spin, is a perfectly nostalgic homage to Tinseltown transitioning from studio lots to New Hollywood location shoots and to the late 1960s, and one of his top efforts to date. It was my favorite film of 2019 and a top 10 pick by the Day’s film staff. (Tom Meek)

Part pacifist manifesto, part gay melodrama, the latest from British filmmaker Terence Davies (“Distant Voices, Still Lives”) chronicles the life and times of Lt. Siegfried Sassoon (Jack Lowden), a real-life British poet and conscientious objector. In July 1917, Sassoon penned his “Soldier’s Declaration,” writing: “that the war is being deliberately prolonged by those who have the power to end it.” Sent to a sanatorium for neurasthenia, Sassoon falls in love with fellow patient and serviceman Wilfred Owen (Matthew Tennyson). When Owen is discharged, returns to the battlefront and is killed, Sassoon gets his first dose of love and loss, establishing a pattern that will continue for the rest of his life. Affairs come and go, most notably with one of the era’s famed singer-entertainers, Ivor Novello (Jeremy Irvine). There is, of course, betrayal and heartbreak, and while most of it is rendered with classic stiff-upper-lip British restraint, we still get plenty of wit, cutting and ironic repartee and piercing, jealous glares. Sassoon eventually gets the memo: Gay non-monogamy isn’t for the faint of heart. When the young ingenue Hester Gatty (Kate Phillips) appears, he confesses that “If I was selfish enough I’d ask you to marry me,” to which she replies “If I were foolish enough, I’d accept.” Sassoon’s bisexuality fulfills his desire for a stable family with children, though that too will eventually come apart. Moving seamlessly between the story of Sassoon and his lovers to impressionistic documentary montages of the Great War, “Benediction” weaves the personal and the political into a tapestry of loneliness and despair and of love found and lost, set against the cruel, unforgiving backdrop of a world at war. (Federico Muchnik) At Landmark Kendall Square Cinema, 355 Binney St.