‘Jupiter Ascending’: Wachowskis rove far in space, yet not far from their familiar fun 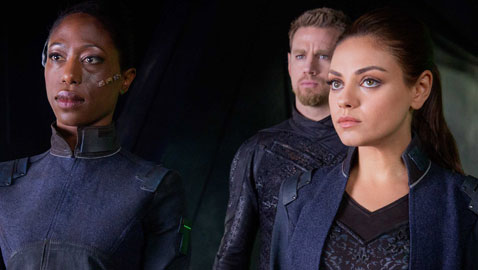 ‘Jupiter Ascending’: Wachowskis rove far in space, yet not far from their familiar fun

The Wachowskis are back and in well-trod territory – yet another dark vision of an outwardly benign regime enslaving humankind without its awareness, again propelled by freakish advances in technology and with a dash of zen mumbo-jumbo thrown in for good measure. The brothers, now simply siblings (Andy and Lana, formerly known as Larry) ascended to the mantle of fanboy heroes with their super slo-mo, stunt-driven “Matrix” trilogy, then crashed and burned with the gonzo, overproduced 2008 blowup of the “Speed Racer” cartoon. Their 2012 adaptation of David Mitchell’s civilization-shaping epic “Cloud Atlas” brought the duo back to center, and “Jupiter Ascending” aligns well with that trajectory – almost to a flaw. 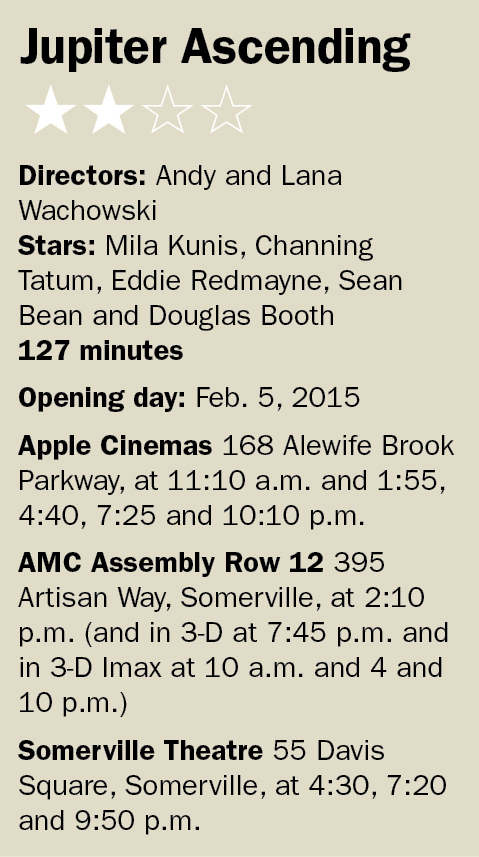 Much of what transpires in “Jupiter Ascending” plays like a quick reshuffling of the Wachowskis’ prior successes. The Neo-esque figure (or “The One,” for those not in the know) is a young lass with the catchy, if unoriginal, moniker of Jupiter Jones (Mila Kunis) who lives in a cramped Chicago tenement apartment with her unkempt Russian immigrant kin (real name Bolodnikov) and cleans toilets for a dime. Jupiter also happens to have the genetic imprint of the matriarch of the House of Abrasax, an order of galactic overlords who have all the bad manners and ruthless tendencies of the royal hierarchy in Frank Herbert’s “Dune” series.

The Abrasaxi, unbeknownst to us sheep, are uber beings who hold the rights to all the inhabitable planets in the starscape, much the same way oil companies hold rights to oil fields or 1 percenters own vacation homes around the globe. And these “entitled” folk live forever (thousands of years) and – à la “Prometheus” – possess the godlike ability to create and destroy planets. At the onset (upon one such planet recently laid to waste), we learn that mommy Abrasax is recently out of the picture (was she murdered?) and her three children (Oscar-nominated Eddie Redmayne, Douglas Booth and Tuppence Middleton) feud over the right to “harvest” Earth, which has become newly “ripe.” In the middle looms Jupiter who, because of her DNA, can sway the balance of power, but of course she’s clueless to the bigger machination in play – that is, until some malevolent “ET”-esque goblins and punked-out cyborgs come at her. From there, much like Sarah Connor in “The Terminator,” she stumbles from one certain-death scenario to the next, incredulous, vulnerable and susceptible until help is sent from afar.

That help, a genetically spliced (with a wolf) soldier named Caine (Channing Tatum with Vulcan ears and mascara applied as if he were a last-second sub in a performance of “Cats”), replete with anti-gravity boots and an orb that allows instant entry through any door or wall, swoops in, and from there you can guess which way “Jupiter” rises. To dress up the age-old cinematic quest to save the world, the Wachowskis set much circumvolution in action. The resulting plots within plots don’t serve to deepen the universe-hopping odyssey; they just keep it afloat. But that’s largely inconsequential, as the seamless rendering of winged giant lizard henchmen and ornate spiracle space stations conjures up a transporting spectacle of wonderment that goes far to paint over the film’s bland, derivative blemishes.

Kunis, getting the big nod here because of her sensual wow as Natalie Portman’s rival dancer and illicit lover in “Black Swan,” comes off a tad light for such a heroic and epic weight on her shoulders. Part of that may be her lack of range, but more to blame is the thinness of the plot, which tosses too many bolts into the sci-fi olio. More time is spent on the subplot of Jupiter’s cousin (Kick Gurry) trying to sell her eggs to a clinic to get a big-screen TV than the budding romance between Caine and Jupiter – which, like the wriggly, boney aliens and bounty hunters, comes flying in out of left field. It’s been a long time since the Wachowskis attempted to articulate the seeds of romance onscreen. In fact, it was their first collaboration, “Bound” (1996), a noir-sh lesbian crime thriller, that, while contrived, possessed earnestness and grit; here, the chemistry of attraction unfurls as a painfully forced necessity of the plot.

Beyond the slick FX, the special sauce to “Jupiter Ascending” lies in the foppishly wicked performances by the three playing the avaricious Abrasaxi. Sean Bean too is dutiful as Caine’s mentor and uneasy ally, as is Doona Bae (“Cloud Atlas” and “The Host”) as an air-cycle riding bounty hunter. But the juicy cherry on top is Terry Gilliam in a very “Brazil”-esque scene, playing the gruff head bureaucrat with a surgically implanted eyeglass, who walks Jupiter through the very tangled web of her royal assignation. “Jupiter Ascending” won’t make anyone forget “Guardians of the Galaxy” anytime soon – we’ll need to wait for summer for that to happen – but in the season of the dumps when studios unceremoniously release the projects they have little confidence in, the Wachowskis’ latest labor is a lion among the dogs.