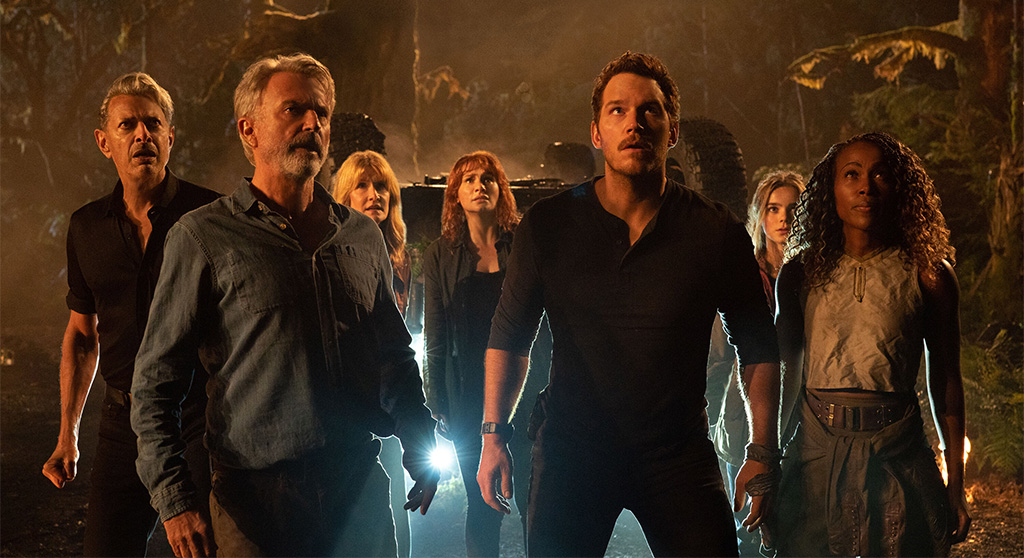 The “Jurassic Park” films all possessed that classic Spielberg wonderment propelled and embossed by a trumpeting John Williams score, and the 2015 “Jurassic World” reboot by Colin Trevorrow, who made the small indie feature “Safety Not Guaranteed” (2012), had some decent rootings to it. The latest dino theme park installment, “Jurassic World Dominion” (also directed by Trevorrow), tries to do too much with too little. It’s not so much that it’s too long – okay, at two and a half hours, it is – but that it tries to blend the two franchises (“Park” and “World” now each having three chapters) and weave them into an unnecessarily complex plot that has world-hopping aspirations as well as deep-creviced conspiracies. It borrows too much from other films without digging new dirt; we get cool new CGI dinos to gawk at, but little else.

The franchise crossover seems to be a thing these days. Last year’s “Spider-Man: No Way Home” not only dragged in a potpourri of MCU denizens but also the previous two incarnations of Spider-Man (Andrew Garfield and Tobey Maguire popping up alongside reigning Spidey Tom Holland) due to a Doctor Strange-triggered multiverse. Here it’s not that complicated or far-fetched – at first. The world is now shared with dinosaurs, which were taken off the Costa Rican island in the previous “World” movie, “Fallen Kingdom” and got loose. If you’re trawling for crab in Alaska, you might bring up a mosasaur that will flip your ship and take your catch; if you’re in the high Sierras, be careful walking about, because there’s velociraptors in the woods. Every now and then a human gets gobbled, there’s an exotic dino market in the bowels of the Maltese capital of Valletta (feeling a lot like the bar scene from “Star Wars”) and a concerted global effort to relocate dinos to sanctuary reserves. More menacing are the 3-foot locusts with cretaceous DNA that eat up nearly every farm crop not sowed with Biosyn Corp.-engineered seeds. Yup, avarice, god complexes and long, dubious corporate agendas play big, as do spy games and old flames.

Raptor wrangler Owen Grady (Chris Pratt) and his betrothed, the former Costa Rican park manager Claire Dearing (Bryce Dallas Howard) live in those Sierras with Maisie Lockwood (Isabella Sermon), who at the end of “Fallen Kingdom” was revealed to be the first human clone. Also in those woods is ol’ raptor Blue, which Owen raised at the theme park. Blue has reproduced without mating, and her offspring and Maisie are wanted by Biosyn for their DNA. Meanwhile, Ellie Sattler (Laura Dern), last seen in 2001’s “Jurassic World III,” gets dragged in to look at the locust problem and enlists the help of paleontologist Alan Grant (Sam Neill), her former flame. (She got married and had kids, he didn’t.) Chaos theory mathematician Ian Malcolm (Jeff Goldblum) just happens to be working for Biosyn on a short-term contract.

Got all that? Now throw in some “Jason Bourne” motorcycle chases – with trained attack velociraptors in hot pursuit – a few “Indiana Jones”-style bits of derring-do and an ultra-maniacal Bond villain (Campbell Scott, as the head of Biosyn) and you’ve got … well, a fairly disjointed movie with little character development and way too much hop and skip. Did I mention that Biosyn is headquartered in the Italian Dolomites and has a sprawling dinosaur reserve around its valleyed perimeter? As far as the dinos go, it’s pretty much a been-there, done-that affair, and the animatronic incarnations (the babies or sick adults laying on their side) look about as real as the ones on display in the Faneuil Hall Dino Safari. The best things in “Dominion” are the new edge players, namely Dichen Lachman (“Severance”) as a can-do bag person and attack-raptor handler, and DeWanda Wise (from the “She’s Gotta Have It” series) as a bush pilot delivering covert cargo anywhere anyhow who, like Owen, digs redheads.

In all its well-meaning unearthing of artifacts and tropes, “Dominion” loses sight of what made the “Jurassic” movies so enjoyable. We see our old friends, but there’s no nostalgia, no emotional connection. It’s as if you’re in a museum looking at a copy of someone you once knew, now cold and inert.