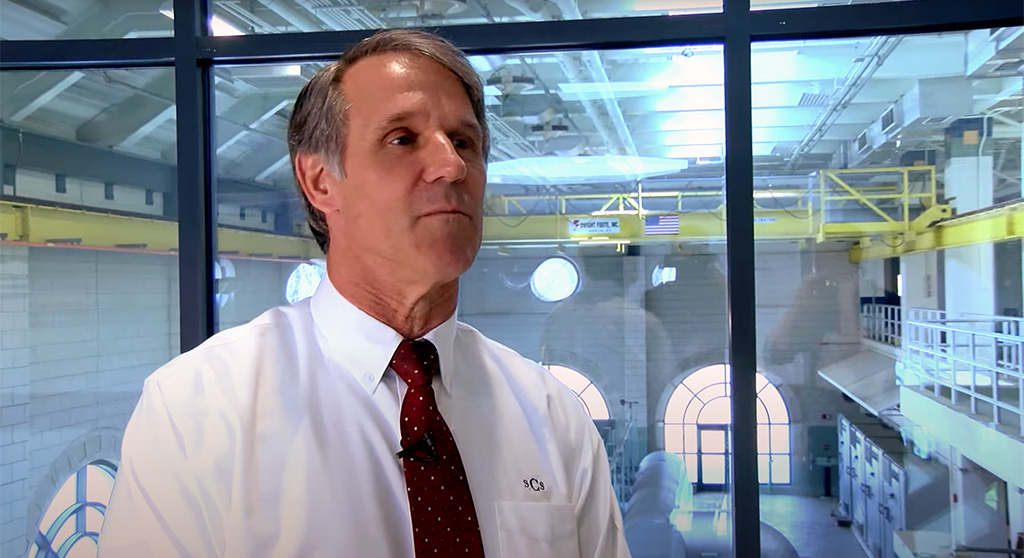 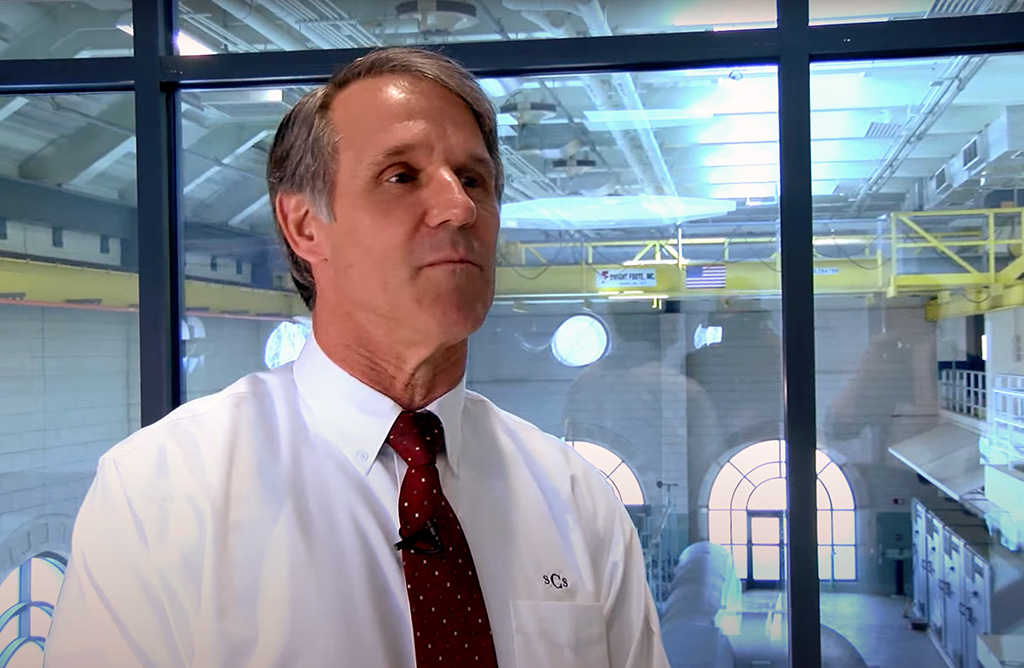 Sam Corda, of the Water Department, at the city’s Walter J. Sullivan Water Purification Facility in a screen capture from a department video.

Just as Cambridge is about to upgrade its water treatment system to halve the levels of a group of worrisome and persistent chemicals, federal regulators have signaled that far more drastic reductions may be necessary. An Environmental Protection Agency “health advisory” on June 15 for per- and polyfluoroalkyl substances, known as PFAS, suggests the need for vanishingly tiny limits.

PFAS include more than 1,000 individual chemicals that resist water, grease, stains and heat. They have been used widely since the 1950s in such disparate products as food packaging, non-stick cookware and firefighting foam. They are extremely stable and ubiquitous in the environment, found in soil, water bodies, fish and other animals. As for humans, depending on exposure, the chemicals have been linked to health effects including certain cancers, immune system dysfunction, high cholesterol, developmental problems in children and reproductive difficulties such as reduced fertility.

Most people in the United States have some amount of PFAS in their blood. Reducing levels in a community’s drinking water can lower blood levels for long-term residents, according to a study by Minnesota health officials in the mid-2000s after water treatment improvements.

In 2016, federal regulators issued a health advisory recommending a maximum level of 70 parts per trillion in drinking water for the combined total of two of the most common of the chemicals. In response, the Massachusetts Department of Environmental Protection in 2020 set a much lower limit of 20 parts per trillion for the combined total of those two chemicals plus four more falling under the PFAS umbrella. The state recommended that “sensitive populations” such as pregnant and nursing women, infants and people with compromised immunity avoid drinking water with concentrations above the limit.

Those numbers are tiny – 1 part per trillion is equivalent to one drop in 20 Olympic-sized swimming pools, the Cambridge Water Department says. And Cambridge has met the state limit since 2019 except for last September, when the total of six PFAS slightly exceeded it, measuring 20.7 parts per trillion.

Still, the Water Department has been working since 2019 to find a way to lower the PFAS level. Besides measuring concentrations in Cambridge drinking water since August 2019, a year later the department began testing three types of materials used in filters for their ability to reduce the presence of the chemicals.

Officials made a choice and requested bids in March of this year; one company responded. As of May, the city was awaiting signatures on a contract and expected to begin work in June to replace the filter media in the treatment plant’s 20-year-old filters, according to a presentation to the water board. When the work is finished, expected in December, the upgrade will cut PFAS levels at least in half, according to the presentation.

Sam Corda, managing director of the Water Department, said the department is going ahead with the project. He said the EPA isn’t expected to issue a regulatory limit for the chemicals until the end of 2023, and that’s after a lengthy comment process. Corda hinted that it could easily be longer, saying the federal agency’s schedule is “aggressive.”

Corda also pointed out that as of now, laboratories can’t even measure levels as low as those in the health advisory. Meanwhile, the state limit of 20 parts per trillion for six PFAS chemicals stands. The state is reviewing the federal advisory, the Department of Environmental Protection said.

Asked how much the filter project will cost, Corda didn’t answer. The water board was told in May that the city has allocated money from federal Covid-19 relief funds for the project, according to minutes of the meeting.

City councillor Quinton Zondervan has pushed city officials to switch to Massachusetts Water Resources Authority water, in part because of problems with the chemicals. He reiterated his opinion on June 28, saying: “We should not be switched back to our own water supply until the PFAS contamination has been removed, through a combination of point source identification and remediation, and filtering.¨

But it’s not clear that the authority’s water has no PFAS or would meet the levels in the federal advisory. The agency tested for the six substances regulated by the state in August 2019, January 2021 and April 2021 and was exempted from testing for the rest of 2021 after finding low levels, the authority says on its website. No results were reported for this year.

The authority found “trace” amounts of the two chemicals cited by the federal regulators, saying the amounts were “too low to be quantified.” A spokesperson said PFAS levels in authority water are well below the state’s limit of 20 parts per trillion while using the most sensitive testing methods available – better even than methods developed by the federal agency itself. But no laboratory methods are currently capable of detecting the tiny levels of the chemicals cited in the June 15 health advisory, the spokesperson said. The advisory level for one of the chemicals is 1,000 times lower than the federal agency’s own analytical method can detect.