A recent update from the Water Department on contamination in our water supply raises grave concerns for our health and safety. Levels of Per- and Polyfluoroalkyl Substances measured in September exceeded the state’s new PFAS Drinking Water Standard, adding to the case against sourcing our drinking water from salty highway runoff along Route 128. Like much of the state, we could be drinking Massachusetts Water Resources Authority water from the rural Quabbin Reservoir in Western Massachusetts, which contains no quantifiable levels of PFAS. The city has repeatedly refused to switch our water supply to the MWRA system, which is mechanically simple because it is already our back-up water supply, based on unfounded claims that this would be more expensive than continuing to provide our own water supply.

Massachusetts only recently began to regulate PFAS chemicals in our drinking water, even though they’ve been in existence since the 1940s and their adverse health effects are well documented, including cancer, liver damage, decreased fertility and increased risk of asthma and thyroid disease. Although there are thousands of individual PFAS compounds in existence, the state regulates only six. The state’s allowable concentration for these six combined is 20 parts per trillion, although there are no “safe” levels for these compounds according to the Environmental Protection Agency. Recent measurements in Cambridge have been as high as 20.7 ppt, and neighboring communities that have consistently detected levels above 20 ppt are distributing bottled water to residents!

The city routinely spends grant money outside of the water fund on protecting our water supply, including recently $800,000 to buy 8 acres in Lincoln to keep land adjoining the watershed undeveloped and a $115,680 grant to complete the city’s pilot testing of a new PFAS filtration system. While the city’s Water Department is confident that they can get the PFAS levels down to below 10 ppt by implementing additional filtration, which is taking longer than expected, it’s important to note again that there are no “safe” levels. To protect our health and safety, we should switch to MWRA water immediately. Contrary to the city’s claims, there is no reason a permanent switch needs to be more expensive to residential ratepayers.

While it’s not possible to do an apples-to-apples comparison of water rates between Cambridge and neighboring Somerville (because quantity ranges and time periods differ), the cost of water in both cities is dominated by the sewer charges, which in Cambridge are significantly higher than Somerville even though both cities pay the MWRA for sewer. If we compare the combined water and sewer rates for residents in the two cities, they appear to be highly similar, even though Somerville sources its water from the MWRA while Cambridge provides its own: 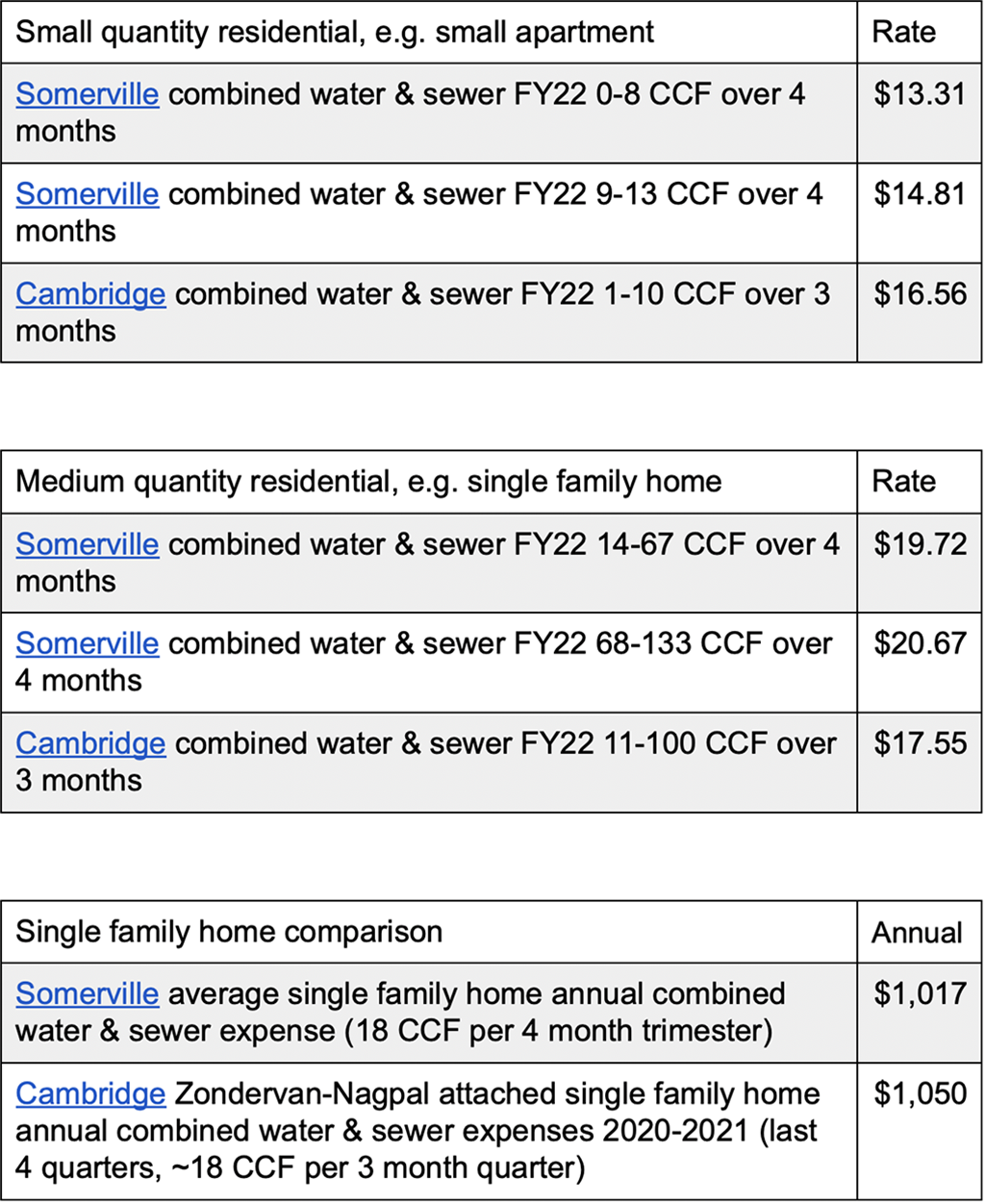 Based on this comparison with Somerville there is no justification for the claim that residential users need to see a significant increase in their water bill if we were to switch our drinking water supply permanently to MWRA. Were we to do so, the Fresh Pond reservoir could be opened up to recreational uses and the filtered water derived from it could still be used by the city for non-potable applications such as cleaning vehicles and watering trees.