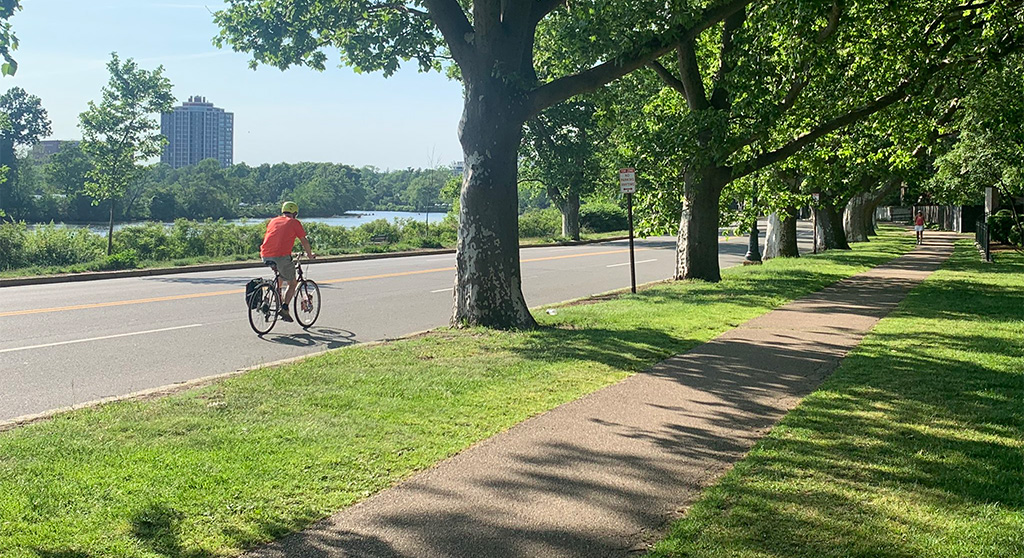 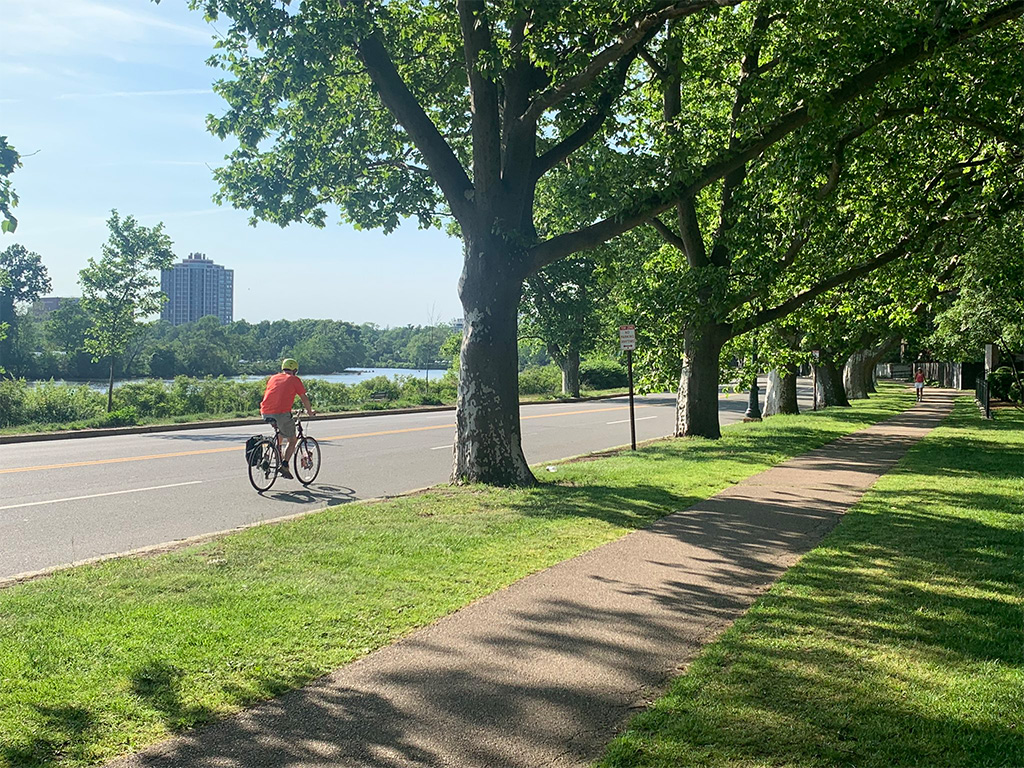 A bicyclist uses Riverbend Park on May 30. (Photo: Jan Devereux)

Saturday closings of Memorial Drive to traffic will stop this weekend, the state announced abruptly in a Wednesday statement emailed to a few officials and residents. When Memorial Drive is closed, Riverbend Park opens, allowing residents to use the road for recreation – a benefit in a city starved for open space that expanded from its traditional Sunday schedule to include Saturday beginning April 23.

In the tersely worded announcement, the state Department of Conservation and Recreation said it would reopen Memorial Drive to car traffic on Saturdays until it “can host a public meeting regarding the Saturday closing and hear more broadly from the public.” The meeting will be scheduled after Labor Day, which falls on Sept. 5, to give the required three weeks of public notice. A promised press release with the city announcing the changes and more details is not yet available.

Requests for information from the state Department of Conservation and Recreation were not returned.

The move is the latest in a series of debates over the closings. A City Council meeting in May was punctuated by residents who felt the closings resulted in “overwhelming” traffic on side streets that left them “hostages” in their homes. Others heralded the additional day of Riverbend Park as a “wonderful benefit.” A June council meeting resulted in offers of compromise to lessen the impacts on local residents.

Wednesday’s announcement left many feeling blindsided, especially after debate over the closings seemed headed toward some type of agreement. “Such incredibly disappointing news,” tweeted councillor Burhan Azeem, a strong supporter of the closings. “This was an abrupt decision. No elected officials had knowledge this was coming,” Azeem said.

A forward of the email announcement by Craig Cashman, DCR’s director of government and legislative affairs, shows its recipients: Along with councillors, city staff and state Rep. Marjorie Decker were Lawrence Adkins and Saundra Graham, residents of the Riverside neighborhood who have complained about traffic diverted from Memorial Drive.

State Reps. Steve Owens and Mike Connolly expressed outrage about the Saturday shutdowns. “Really disappointed to learn today that the Department of Conservation and Recreation is going back on their promise to close Memorial Drive and activate Riverbend Park on Saturdays for the rest of the Summer. Changing this effective immediately is dangerous! People will show up this Saturday expecting to use the street!” Owens said.

Connolly, contacted for a comment, said, “While this location isn’t technically in my district, it’s an amenity my constituents have come to rely on. Even at this late hour I’m holding out hope the state will change course. I find it shocking that the established policy would be canceled on little notice without any opportunity for broad engagement by all concerned.”

Those in the bike safety community also expressed disappointment. “Unfortunately, councillor [E. Denise] Simmons’ fight against the Memorial Drive Saturday park conversion has succeeded, at least for now,” the group Cambridge Bike Safety said in an email blast on Thursday. Former vice mayor Jan Devereux tweeted in agreement. “You’d think collecting 3,800 signatures and having an 8-0 vote of the City Council in support of full weekend road closings would be enough,” Devereux said.

Cambridge Bicycle Safety took to social media to promote a petition in reaction to the state announcement. It urged the council to reject attempts to reduce park hours and keep trying to expand the park to other parts of the city, such as East Cambridge.

The outcry on Twitter coincided with an endorsement of bike lanes from Robert Downey Jr., who on Wednesday visited the Massachusetts Institute of Technology – the alma mater of the actor’s Marvel movie character, Tony Stark. The trip was promoted by his environmental group, the FootPrint Coalition, but in a tweet sent from Downey’s own account he’s seen bicycling on the Massachusetts Avenue Bridge urging people to “‘self-propel’ our planets future” by adding bike lanes. It bears the hashtag #bikelanesrock.