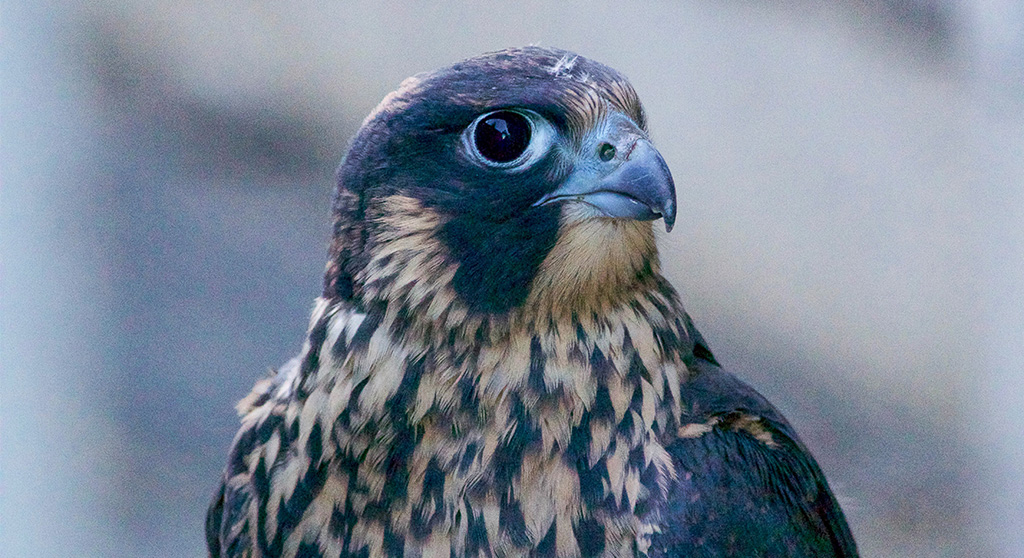 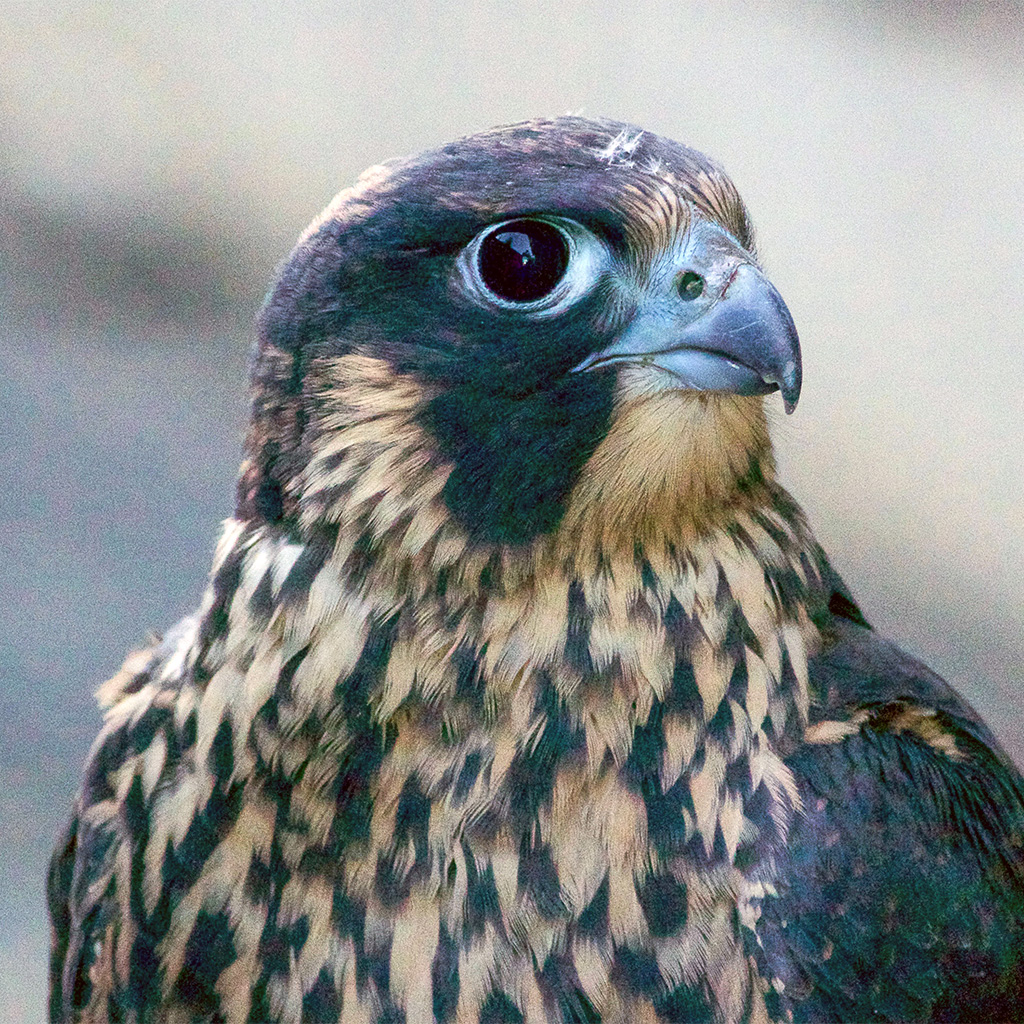 The peregrine falcon is the fastest bird on Earth. These birds have been clocked diving from great heights at more than 200 miles per hour! Although you might think such high speeds would throw the birds off target, in fact the opposite is true: High speed allows them to better maneuver during their strikes.

Studies have shown that starlings are very good at outmaneuvering peregrine falcons if the falcons fly slowly – if a falcon increases its speed by diving, it is much more successful. To catch a starling traveling in a straight line, the falcon needs to dive at 90 mph. But to catch a starling that feels threatened and is therefore flying erratically, the falcon needs to reach diving speeds of 225 mph. At these speeds, falcons have superb turning force, tremendous control and incredible agility in rolls, which makes them more maneuverable and deadly. 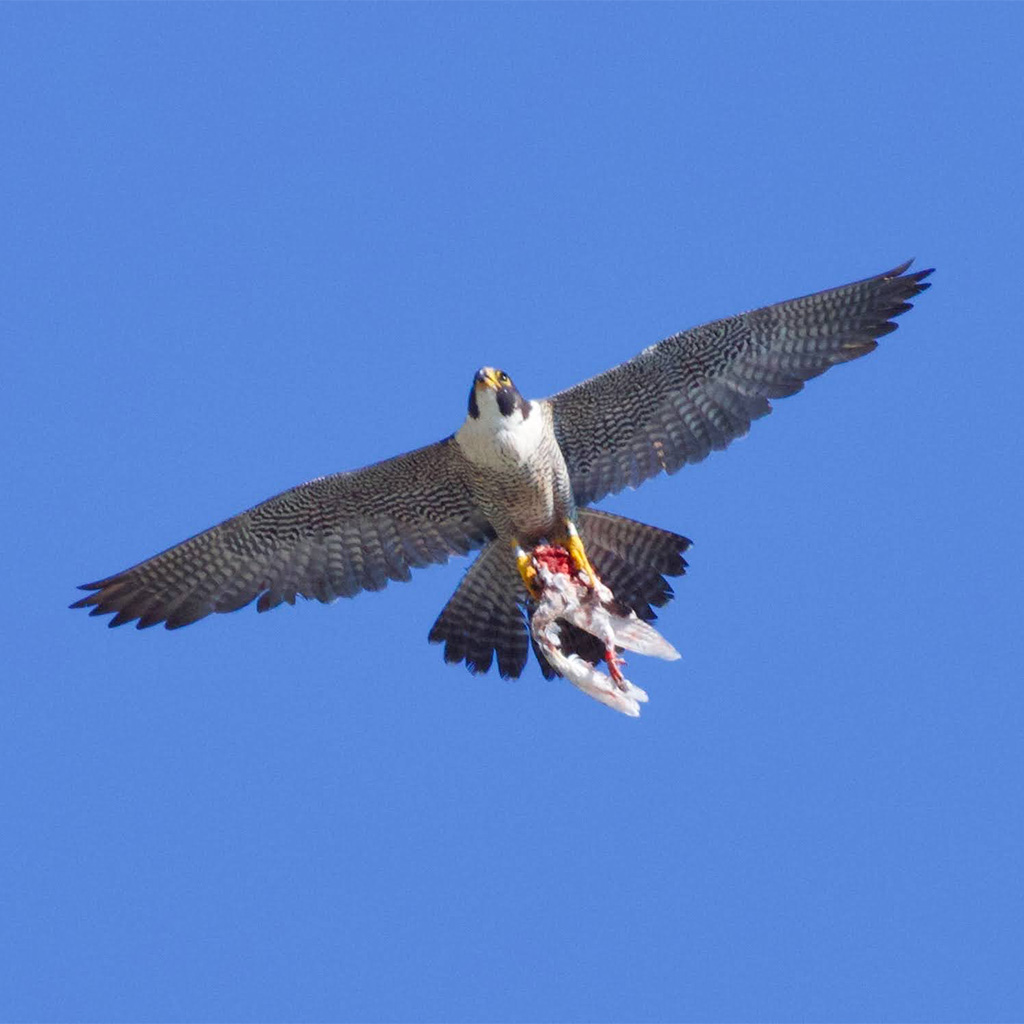 A peregrine falcon flies with its prey over Cambridge. (Photo: Brian Rusnica) 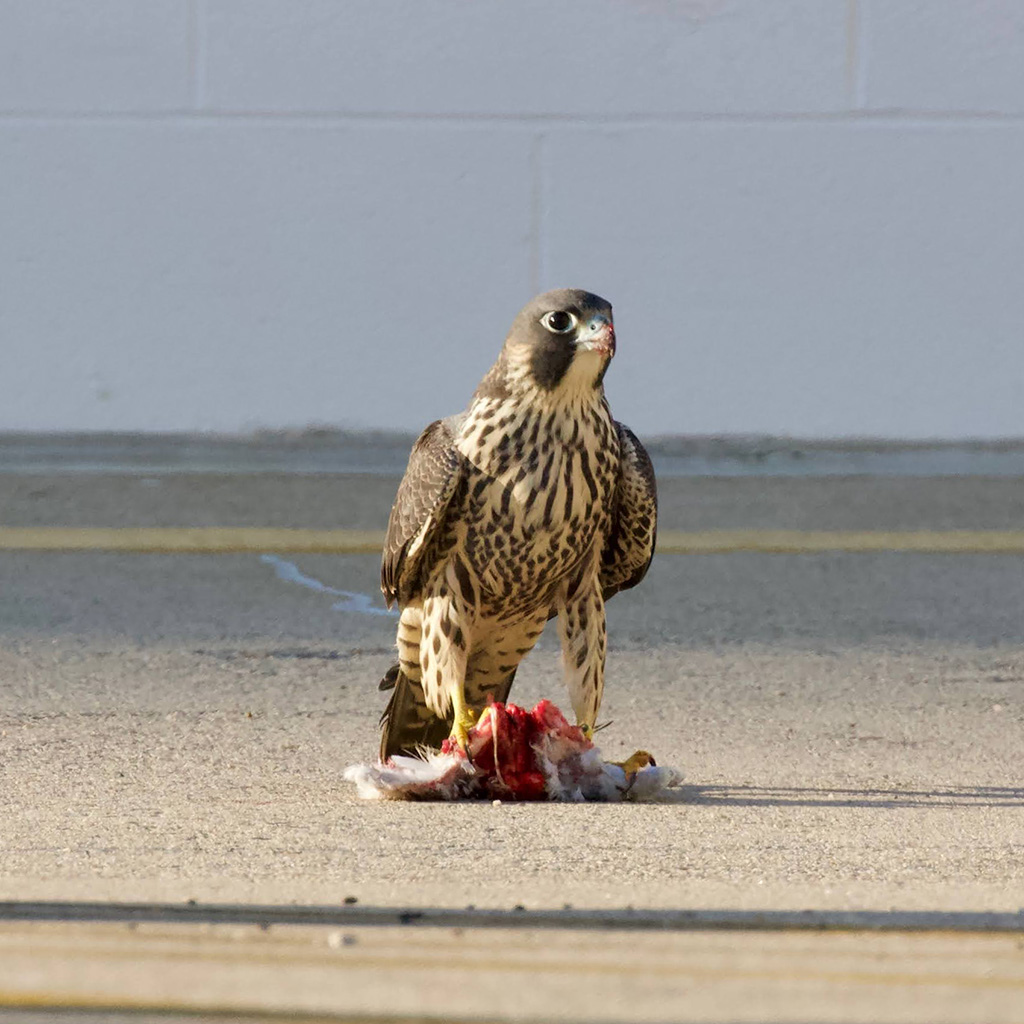 It’s no wonder these birds nest on high rocky cliffs, called eyries. They also nest on quarry cliffs and humanmade cliffs, which we call tall buildings and bridges. Unlike most birds, peregrine falcons do not build nests; they find a cliff and scrape out some soil to make a depression in which to lay eggs. Buildings and bridges do not have soil, obviously, so peregrines will sometimes take over an unused pigeon nest or simply nest on a bare ledge. Nest failure is high on such sites, but sometimes people help by providing a nest box or nesting tray. Today peregrine falcons nest on buildings in Cambridge, Watertown, Boston, Chelsea and other cities and on bridges in Charlestown and Fall River, West Springfield and Northampton. A pair of peregrine falcons even nests on a Brockton cell tower, and another pair tried to nest on a crane in Quincy. 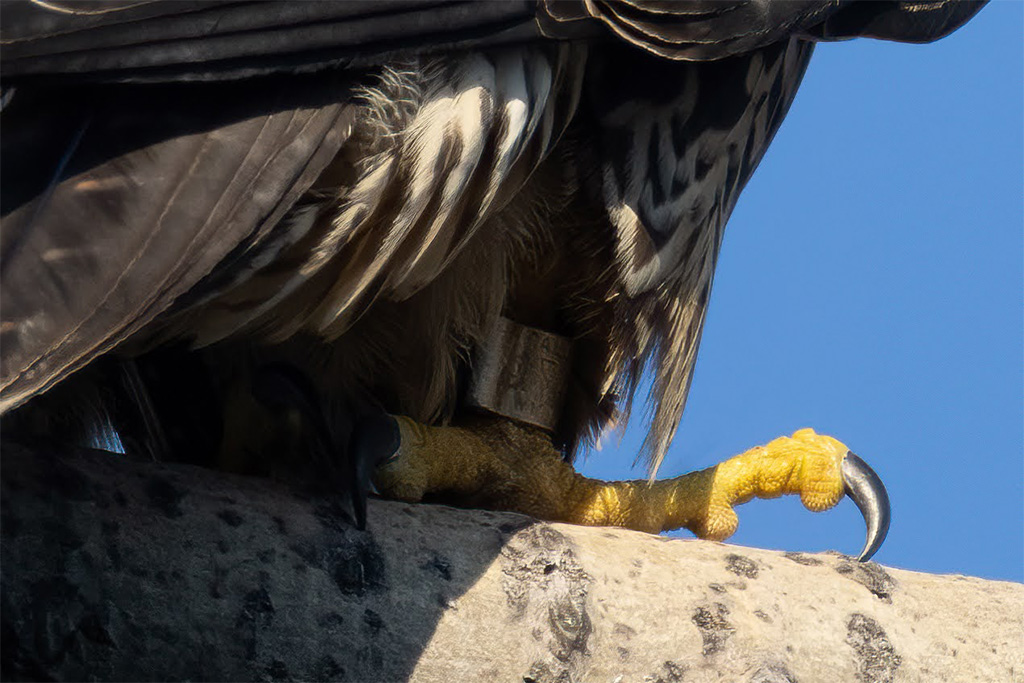 A falcon has long toes so it can grasp its prey through the feathers. (Photo: Richard George)

Most peregrine falcons first nest when they are 2 or 3 years old. Pairs are monogamous and use the same territory and often the same nesting site every year. By the beginning of March, adult pairs choose their nest site for the season. The female lays about four eggs in early April. The chicks hatch in early May and are covered in white down. Both parents gather prey to feed the youngsters. The females are about one-third larger than the males, and tend to hunt larger prey too. This eliminates overlap and helps provide more food for the chicks. Because a peregrine can carry only about half its weight, it sometimes must lighten its load, so it removes the head, the legs, and one or both wings before it carries prey back to hungry chicks. 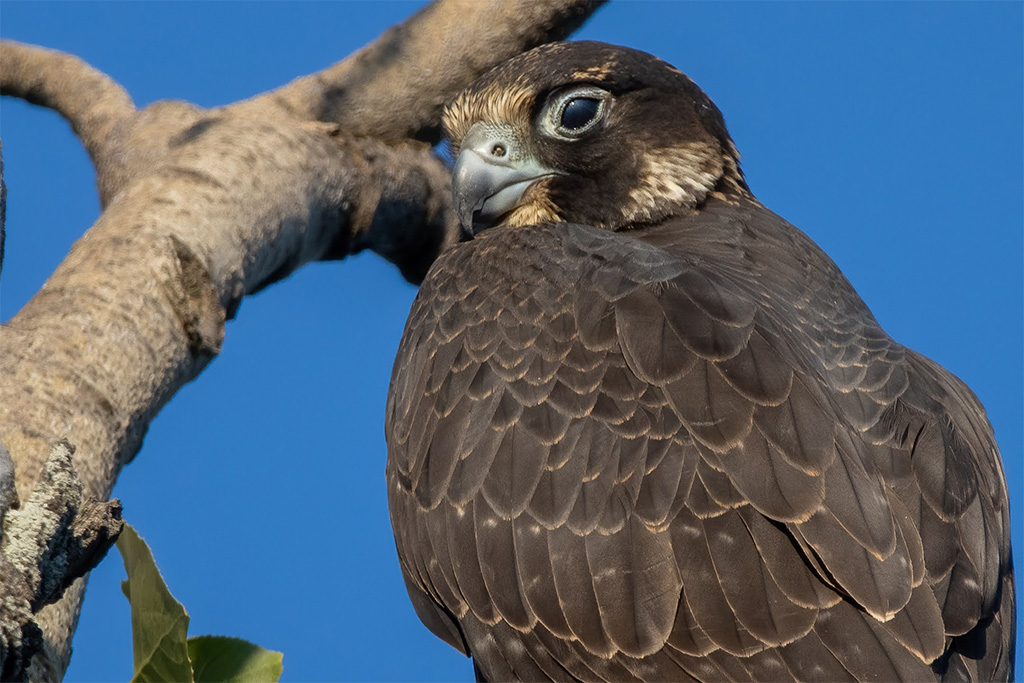 A falcon in Strawberry Hill, Cambridge. The falcon’s notched beak helps it to kill prey quickly by severing the spinal cord at the neck. (Photo: Richard George)

In mid-June, at about 7 weeks of age, the chicks leave the nest, but still depend on the parents for food for a couple of months. Now the parents often drop prey, sometimes still living, to the young hunters. By August, the youngsters are completely independent of their parents, and most fly to other mostly coastal areas of Massachusetts. A few migrate south, but return in the spring and never migrate again.

Peregrines have a unique hunting strategy. Usually at dawn or dusk, they perch in a high location looking for prey. They often hunt in pairs, double-teaming prey to confound it. Sometimes they fly high and look for prey below. When a falcon spots prey, it may plunge straight down in a controlled dive at high speeds. This maneuver is called a stoop. The falcon then strikes its prey with a clenched foot, stunning or killing the bird, but continuing its dive past the stricken bird. Pulling out of its dive, the falcon catches the falling victim in its talons and kills the bird by using its notched beak to severe the neck vertebrae. After carrying the prey to a perch, it plucks and eats it. Peregrine falcons in Massachusetts prey commonly on medium-sized birds such as pigeons and mourning doves, starlings and blue jays. If the prey is too heavy to carry, the falcon may drop the bird to the ground, pluck it and eat it where it falls. 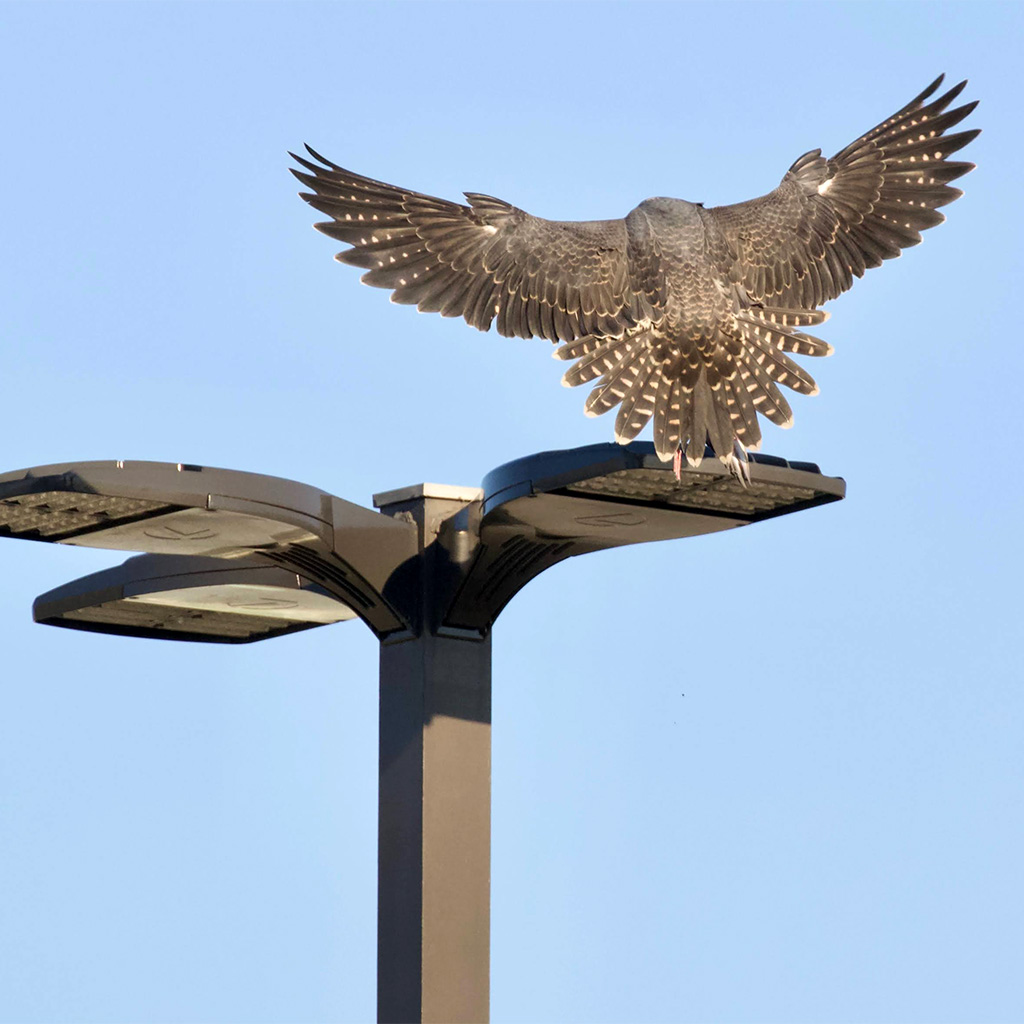 A peregrine falcon alights on a streetlight in Cambridge … (Photo: Brian Rusnica) 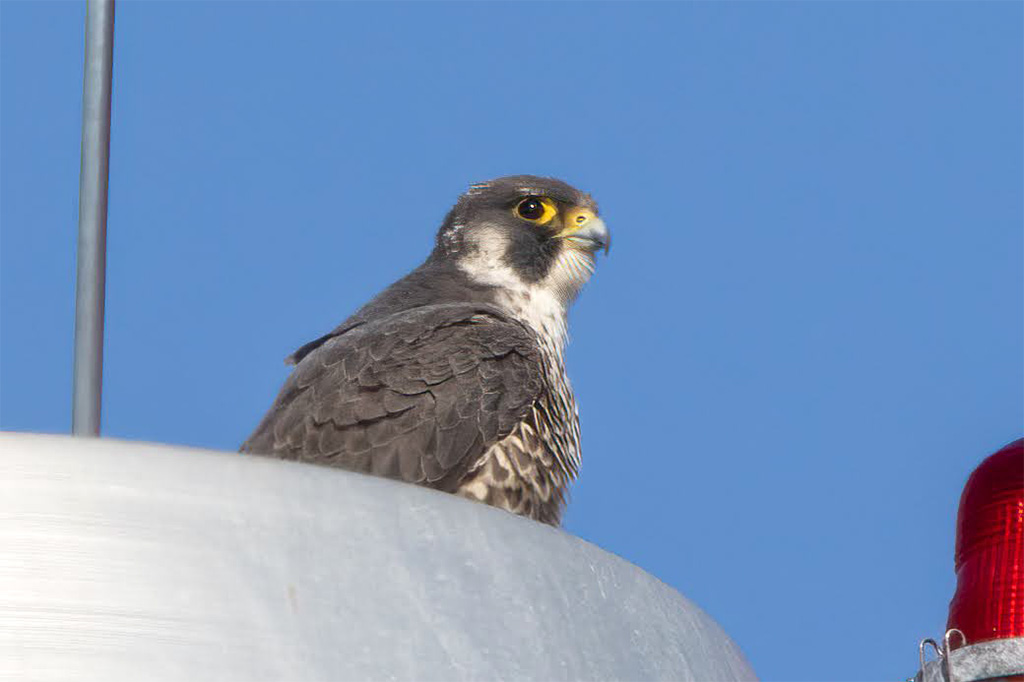 … while another scans Castle Island in Boston. (Photo: Richard George)

In the 1930s and 1940s, there were 14 nesting pairs of peregrine falcons in Massachusetts. Because falcons are near the top of the food chain, pesticides in their prey become concentrated in the falcons’ tissues, sometimes with serious consequences. DDT use in the 1950s caused falcon eggshells to become so thin that the eggs broke, and by 1966 there was not one single nesting pair of peregrine falcons in the entire eastern United States. Regulators banned DDT in 1972, and falcon restoration efforts began. It took a while for these efforts to be successful, but in 1984 and 1985, scientists released young falcons on the roof of the McCormack Post Office and Courthouse in Boston. In 1987, the first pair nested. Today, biologists estimate that there are 50 pairs of peregrine falcons in Massachusetts. In 2021, MassWildlife banded 55 peregrine falcon chicks – 31 females and 24 males. 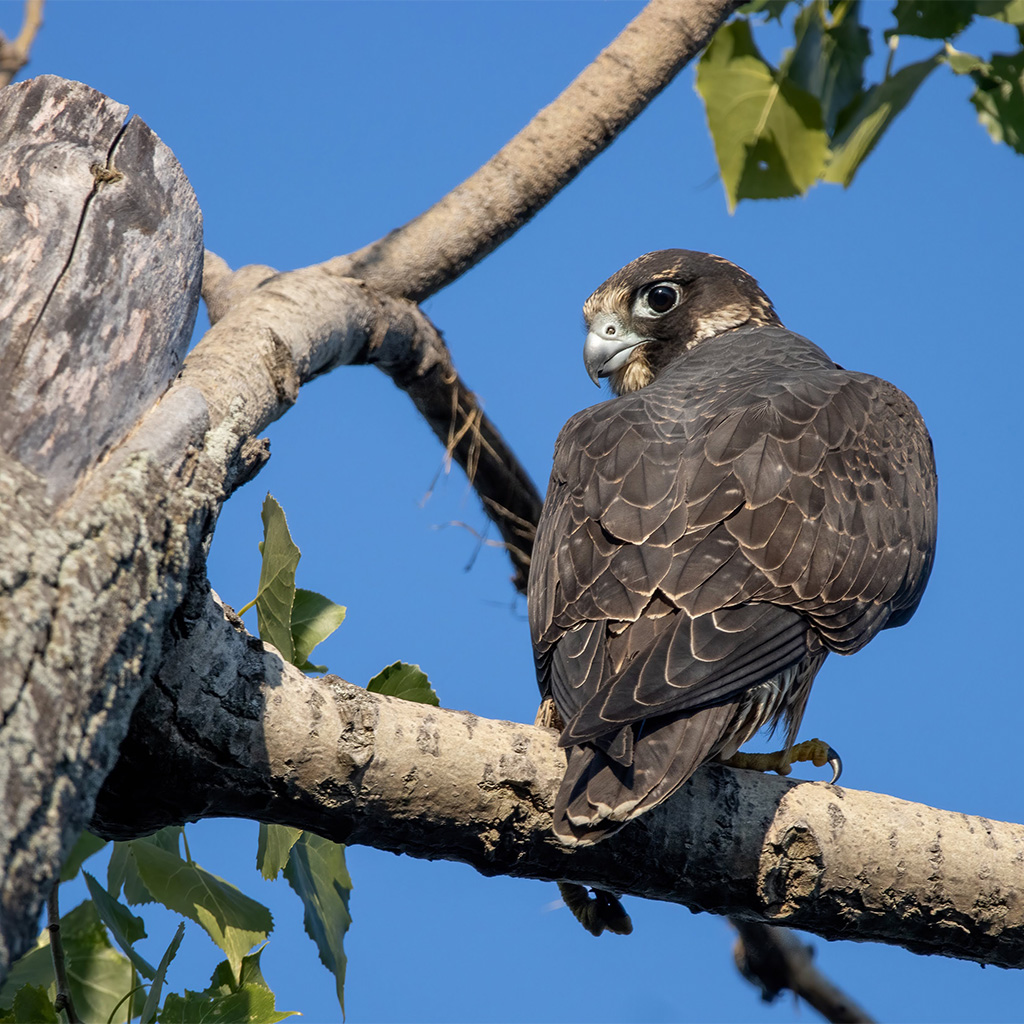 A peregrine falcon looks over its shoulder in Strawberry Hill. (Photo: Richard George)

There are quite a few falcon cameras in the region. Though there are fewer online this time of year, some still provide spectacular views. Return to these sites in the summer to watch the parents’ nesting activities and the youngsters as they grow. 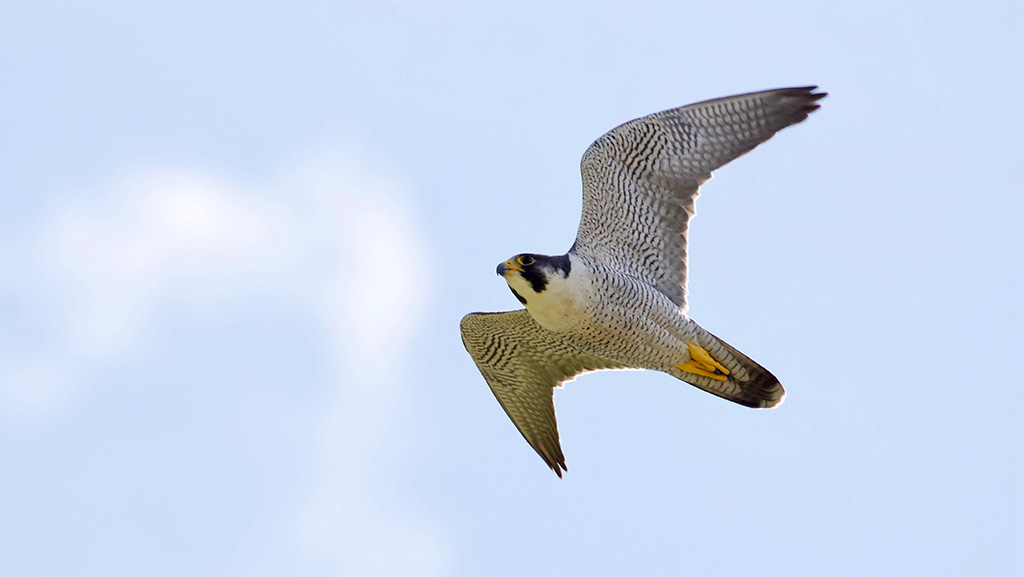 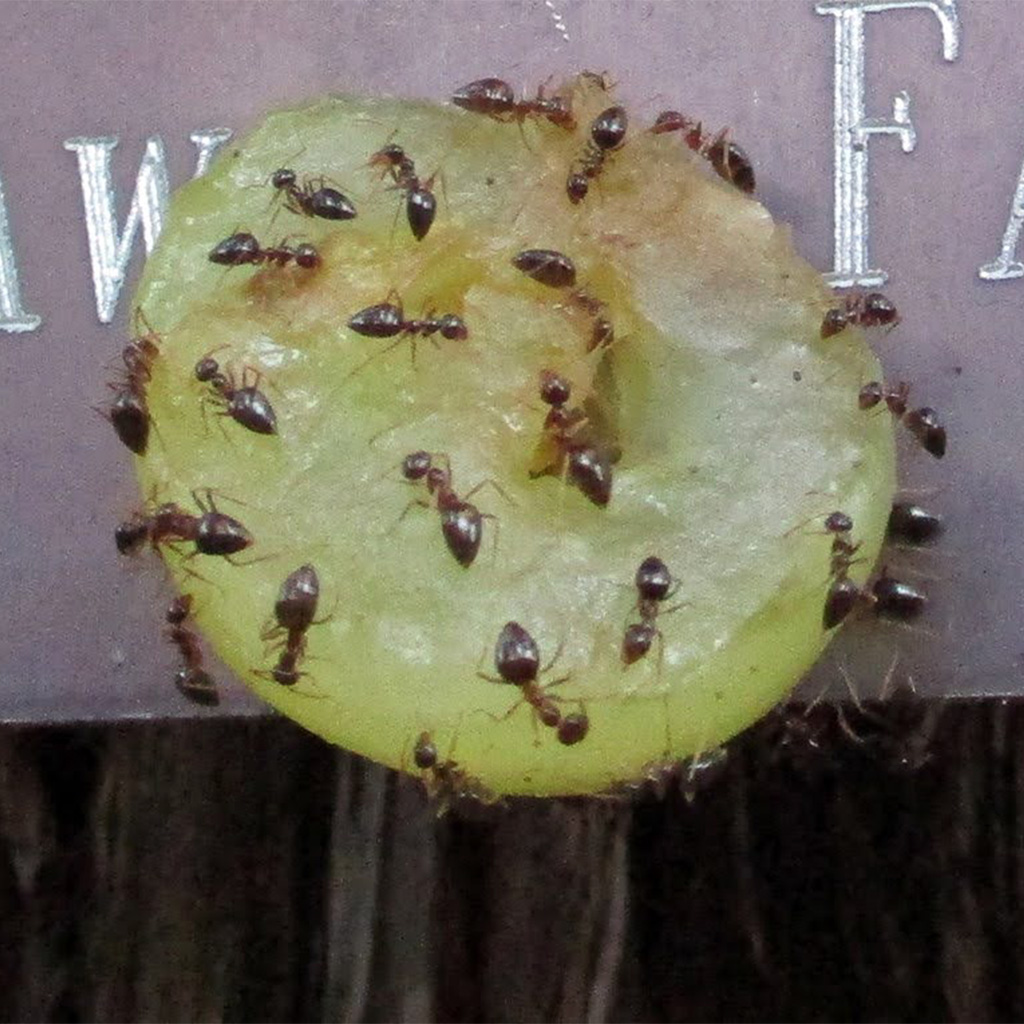 American winter ants seen by the Angstadt family in Watertown in November 2020.